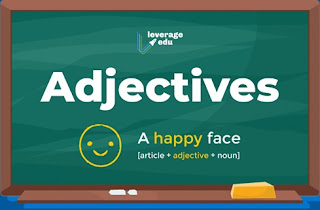 The Definitions of Adjective

- An adjective is a word that modifies a noun or noun phrase or describes its referent.

- Adjective is a word that describes a noun or a pronoun

- Adjective is a word naming an attribute of a noun, such as sweet, red, or technical.

- Adjective is a word that tells us more about a noun. It "describes" or "modifies" a noun

- Adjectives are words that describe the qualities or states of being of nouns.

- Adjective is a word belonging to one of the major form classes in any of numerous languages and typically serving as a modifier of a noun to denote a quality of the thing named, to indicate its quantity or extent, or to specify a thing as distinct from something else.

Adjective "describes" or "modifies" a noun (The big dog was hungry). In these examples, the adjective is in bold and the noun that it modifies is in italics.

An adjective often comes BEFORE a noun:

And sometimes an adjective comes AFTER a verb:

But adjectives can also modify pronouns (She is beautiful). Look at these examples:

Note that we can often use two or more adjectives together (a beautiful young French lady / it is black and white).

Some adjectives have particular endings, for example:

However, many adjectives have no obvious form.

Most adjectives can be comparative or superlative, for example:

What is an adjective?

Adjectives are words that describe or modify other words, making your writing and speaking much more specific, and a whole lot more interesting. Words like small, blue, and sharp are descriptive, and they are all examples of adjectives.


Because adjectives are used to identify or quantify individual people and unique things, they are usually positioned before the noun or pronoun that they modify. Some sentences contain multiple adjectives.

In the following examples, the highlighted words are adjectives:

Remember that adjectives can modify as well as describe other words, and you’ll find it much easier to identify different types of adjectives when you see them.

There are only three articles, and all of them are adjectives: a, an, and the. Because they are used to discuss non-specific things and people, a and an are called indefinite articles. For example:

Neither one of these sentences names a specific banana or a certain adventure. Without more clarification, any banana or adventure will do.

As the name indicates, possessive adjectives are used to indicate possession. They are:

Be careful, because some adjectives that appear in a series are not coordinate. In the phrase green delivery truck, the words green and delivery are not separated by a comma because green modifies the phrase delivery truck. To eliminate confusion when determining whether a pair or group of adjectives is coordinate, just insert the word and between them. If and works, then the adjectives are coordinate and need to be separated with a comma.

When they’re used in sentences, numbers are almost always adjectives. You can tell that a number is an adjective when it answers the question “How many?”