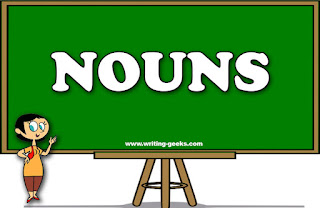 The Definitions of Noun

- A noun is a word that functions as the name of a specific object or set of objects, such as living creatures, places, actions, qualities, states of existence, or ideas.

- Noun is a word (other than a pronoun) used to identify any of a class of people, places, or things (common noun), or to name a particular one of these ( proper noun ).

- Noun is a word that is the name of something (such as a person, animal, place, thing, quality, idea, or action) and is typically used in a sentence as subject or object of a verb or as object of a preposition

- A noun is a part of a sentence that identifies the places, things, ideas, people, events, and other objects.

- Noun is a word that refers to a person, place, thing, event, substance, or quality

What is a Noun?

noun (noun): a word (except a pronoun) that identifies a person, place or thing, or names one of them (proper noun)

The simple definition is: a person, place or thing. Here are some examples:

The problem with the simple definition above is that it does not explain why "love" is a noun but can also be a verb.

Another (more complicated) way of recognizing a noun is by its:

There are certain word endings that show that a word is a noun, for example:

But this is not true for the word endings of all nouns. For example, the noun "spoonful" ends in -ful, but the adjective "careful" also ends in -ful.

We can often recognise a noun by its position in the sentence.

Nouns often come after a determiner (a determiner is a word like a, an, the, this, my, such):

Nouns often come after one or more adjectives:

3. Function in a sentence

Nouns have certain functions (jobs) in a sentence, for example:

But the subject or object of a sentence is not always a noun. It could be a pronoun or a phrase. In the sentence "My doctor works hard", the noun is "doctor" but the subject is "My doctor".

Nouns are an important part of speech in English, probably second only to verbs. It is difficult to say much without using a noun.

Most nouns are common nouns. Common nouns refer to people, places and things in general like chair or dog. Any noun that is not a name is a common noun.

Note: Adjectives that we make from proper nouns also usually start with a capital letter, for example Shakespearian, Orwellian.

Concrete nouns are physical things that you can touch.

You cannot count uncountable nouns. You need to use "measure words" to quantify them.

A collective noun denotes a group of individuals.

Rule: Collective nouns can be treated as singular or plural. More about this at rules of subject-verb agreement with collective nouns.

A compound noun is a noun that is made with two or more words. Most compound nouns are [noun + noun] or [adjective + noun]. Each compound noun acts as a single unit and can be modified by adjectives and other nouns.

Nouns are everywhere in our writing. But what are all the types of nouns you come across, and how do you use them?

What is a noun?

Nouns form a large proportion of English vocabulary and they come in a wide variety of types. Nouns can name a person:

Albert Einstein
the president
my mother
a girl

Nouns can also name a place:

Nouns can also name things, although sometimes they might be intangible things, such as concepts, activities, or processes. Some might even be hypothetical or imaginary things.

One important distinction to be made is whether a noun is a proper noun or a common noun. A proper noun is a specific name of a person, place, or thing, and is always capitalized.

Does Tina have much homework to do this evening?

Tina is the name of a specific person.

Old Faithful is the specific name of a geological phenomenon.

The opposite of a proper noun is a common noun, sometimes known as a generic noun. A common noun is the generic name of an item in a class or group and is not capitalized unless appearing at the beginning of a sentence or in a title.

The girl crossed the river.

I heard the doorbell.
My keyboard is sticky.

Doorbell and keyboard are real things that can be sensed.

Conversely, an abstract noun is something that cannot be perceived by the senses.

We can’t imagine the courage it took to do that.

Courage is an abstract noun. Courage can’t be seen, heard, or sensed in any other way, but we know it exists.

A collective noun denotes a group or collection of people or things.

That pack of lies is disgraceful.

A pride of lions roamed the savanna.

Pride of lions is also a collective noun.

Every sentence must have a subject, and that subject will always be a noun. The subject of a sentence is the person, place, or thing that is doing or being the verb in that sentence.

Maria is the subject of this sentence and the corresponding verb is a form of to be (is).

Give the books to her.

Nouns as subject and object complements

Mary is a teacher.

Subject complements normally follow linking verbs like to be, become, or seem. A teacher is what Mary is.

A related usage of nouns is called an object complement.

I now pronounce you husband and wife.

Appositive nouns and nouns as modifiers

An appositive noun is a noun that immediately follows another noun in order to further define or identify it.

Michael is an appositive here, further identifying the subject of the sentence, my brother.

Sometimes, nouns can be used adjectivally as well.

He is a speed demon.

Speed is a normally a noun, but here it is acting as an adjective to modify demon.

Plural nouns, unlike collective nouns, require plural verbs. Many English plural nouns can be formed by adding -s or -es to the singular form, although there are many exceptions.

cat—cats
These two cats are both black.

Note the plural verb are.

Countable nouns are nouns which can be counted, even if the number might be extraordinarily high (like counting all the people in the world). Countable nouns can be used with a/an, the, some, any, a few, and many.

Here is a cat.

Here are a few cats.
Here are some cats.

Uncountable nouns are nouns that come in a state or quantity which is impossible to count; liquids are uncountable, as are things that act like liquids (sand, air). They are always considered to be singular, and can be used with some, any, a little, and much.

Intelligence is an uncountable noun.

Students don’t seem to have much homework these days.

This example refers to an unspecified, unquantifiable amount of homework, so homework is an uncountable noun.

The cat’s toy was missing.

The cat possesses the toy, and we denote this by use of ‑’s at the end of cat.

When a singular noun ends in the letter s or z, the same format often applies. This is a matter of style, however, and some style guides suggest leaving off the extra s.

I have been invited to the boss’s house for dinner.
Mrs. Sanchez’s coat is still hanging on the back of her chair.

Plural nouns ending in s take only an apostrophe to form a possessive.

My nieces’ prom dresses were exquisite.