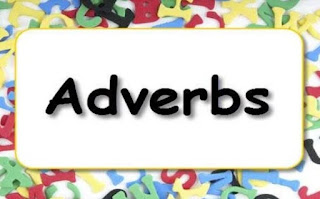 - Adverb is a part of speech that modifies a verb, an adjective, or another adverb.

- An adverb is a word or an expression that modifies a verb, adjective, another adverb, determiner, clause, preposition, or sentence.

- An adverb is a part of speech that provides greater description to a verb, adjective or another adverb.

- An adverb is a word such as 'slowly', 'now', 'very', 'politically', or 'fortunately' which adds information about the action, event, or situation mentioned in a clause.

- An adverb is a word that modifies anything other than a noun, usually a verb.

- Adverb is a word that describes or gives more information about a verb, adjective, adverb, or phrase:

- Adverb is a word or phrase that modifies or qualifies an adjective, verb, or other adverb or a word group, expressing a relation of place, time, circumstance, manner, cause, degree, etc. (e.g., gently, quite, then, there).

- Adverb is a word that describes a verb, an adjective, another adverb, or a sentence and that is often used to show time, manner, place, or degree

- An adverb is a word that modifies (describes) a verb (he sings loudly), an adjective (very tall), another adverb (ended too quickly), or even a whole sentence (Fortunately, I had brought an umbrella).

What is an Adverb?

adverb is a word that modifies a verb, an adjective or another adverb, expressing manner, place, time or degree; a word that can modify a phrase, clause or sentence

An adverb is a word that tells us more about a verb. It "qualifies" or "modifies" a verb (The man ran quickly). In the following examples, the adverb is in bold and the verb that it modifies is in italics.

But adverbs can also modify adjectives (Tara is really beautiful), or even other adverbs (It works very well). Look at these examples:

We make many adverbs by adding -ly to an adjective, for example:

There are some basic rules about spelling for -ly adverbs. See the table below: 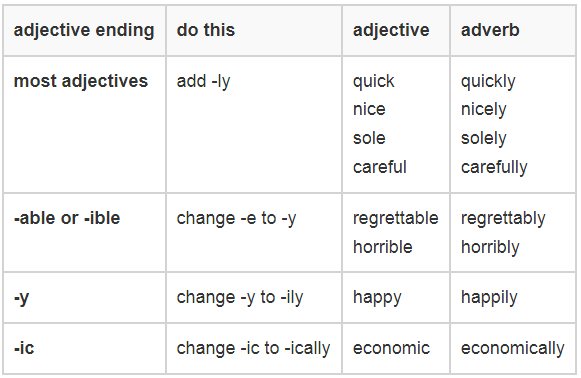 But not all words that end in -ly are adverbs. The following -ly words, for example, are all adjectives:

And some adverbs have no particular form. Look at these examples:

Note that the form of an adverb can also change to make it comparative or superlative.

Here you can see the basic kinds of adverbs.

We normally use Adverbs of Manner with dynamic (action) verbs, not with stative or state verbs.

They can answer the question "when?":

Or they can answer the question "how often?" (frequency):

Adverbs of Degree tell us the degree or extent to which something happens. They answer the question "how much?" or "to what degree?". Adverbs of Degree can modify verbs, adjectives and other adverbs.

What is an Adverb?

Adverbs are words that are used in sentences to describe or change the meaning of a Verb or Adjective or even another Adverb. They add a description to the sentence to make it more detailed and interesting. For example:

- He walked slowly across the square.

Here, one can see that the Adverb ‘slowly’ is describing the Verb ‘walk’ by telling that the person was walking slowly.

Adverbs are used in sentences to answer many questions about the Verbs/Adjectives/Adverbs themselves. The different types of Adverbs are as following:

What is an adverb of time? Look at examples below:

E.g.: The results were announced yesterday.

Here the Adverb is yesterday which is answering the question: When were the results announced? ‘Announced’ is the verb in this sentence.

E.g.: She will visit the hospital tomorrow.

Here the Verb is ‘visit’ and the Adverb is tomorrow as the question being asked is: When will she visit the hospital?

Other examples of Adverbs of Time are – Once, Never, Tomorrow, Daily, etc.

What is an adverb of place? Look at examples below:

E.g.: They will meet you there.

The Adverb here is there that is specifying a place for the Verb meet and the question being answered is: Where will they meet you?

Here the Verb is bloom and the Adverb is everywhere, answering the question: Where do the flowers bloom in spring?

Other examples of Adverbs of Place are – Anywhere, Somewhere, Near, Far, etc.

What is an adverb of manner? Look at examples below:

E.g.: He quietly slipped away.

The Verb here is work and the Adverb is fast and the question being asked is: How does she work?

These Adverbs tell about the manner of the action being done, whether it is done happily or haltingly etc. Other examples of Adverbs of Manner are – Honestly, Joyfully, Cunningly, etc.

What are adverbs of frequency? Let take a look at those examples below:

E.g.: He likes to watch TV every day.

Here, the Adverb is every day and it is telling about the amount of time spent in doing the Verb, which is watch. The question in this sentence is: How often does he watch TV?

E.g.: They meet every week.

The Adverb here is every week and it is telling the frequency and the Verb is meet. The sentence is telling us: How often do they meet?

These Adverbs are used to show the duration or timing of the action that is happening/had happened/will happen. They also tell us how often and how long these actions would be.

E.g.: She almost finished the work.

The Verb here is finished and the Adverb is almost which is telling us about the amount of the work finished. The question being asked is: How much of the work did she finish?

E.g.: They were completely surprised by the windfall.

The adverb here is completely which is showing the degree to which ‘they’ were surprised which is the Verb. The question being asked here is: How much were they surprised?

The Adverbs of Degree are used to show to what extent or how much has an action been done or will be done.

Other examples of these Adverbs are – Fully, Partially, Altogether, etc.

Adverbs of Confirmation and Negation

The Adverb here is certainly which is reinforcing the Verb like in answer to the question: Will they like this vase?

E.g.: He never leaves his house.

The Adverb never is negating the Verb leave. It is answering the question in denial: Does he ever leave his house?

These Adverbs either confirm or deny the action of the Verb. They are also used to reinforce the action that is described by the Verb.

Other examples of Adverbs of Confirmation are – Definitely, Absolutely, Surely, etc. Examples for Adverbs of Denial or Negation are – No, Don’t, Can’t, etc.

They found his secret easily.

Unfortunately, they found his secret easily.

Here, we see that adding the Adverb, unfortunately, has changed the entire tone of the sentence. Earlier, it was a passive tone, now it has a negative or disappointed tone.

- Luckily, the dog did not bite the children.

- Happily, the power returned before the big match.

- Did he honestly expect me to lie for him? (Adverb adds comment on the anger of the speaker.)

- And they would win the world cup, obviously. (Can be said in a sarcastic as well as positive manner)

What are adverbs of conjunction?

Clause 1: He was going for an important interview.

Clause 2: He made sure he reached on time.

He was going for an important interview; accordingly, he made sure he reached on time.

Here, we see how the Adverb ‘accordingly’ is joining the two clauses and showing the relation between them with the use of a semicolon (;). Accordingly means- therefore or that is why.

A few other Adverbs of Conjunction are:

- However – Yet, on the other hand, in spite of

- Consequently – As a result, resulting in

- Moreover – Beside, in addition

- Conversely – Opposite of, contrary to

What is the correct place to put an adverb in English sentences?

Adverbs can be used in diverse ways, which means that they are very flexible in sentences; they can be moved around quite a bit without causing any grammatical irregularities.

Adverbs are used to begin sentences/clauses

- Tomorrow I am leaving for Calcutta.

Adverbs are used in the middle of sentences

- You are always late.

- I will probably be absent at the party.

Adverbs  are used to at the end of sentences

- He wrote the answers correctly.

- His stammer caused him to speak haltingly.