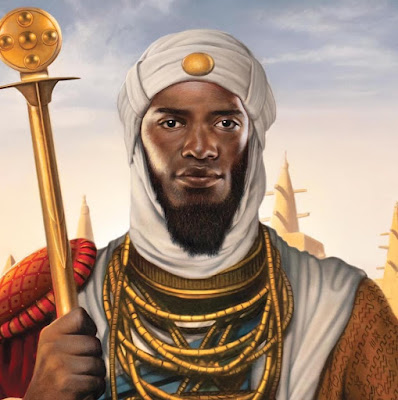 Musa I (1280 – 1337), or Mansa Musa, was the tenth Mansa of the Mali Empire, an Islamic West African state. He has been described as the wealthiest individual of the Middle Ages.

At the time of Musa's ascension to the throne, Mali in large part consisted of the territory of the former Ghana Empire, which Mali had conquered. The Mali Empire consisted of land that is now part of Mauritania and the modern state of Mali. During his reign, Musa held many titles, such as "Emir of Melle", "Lord of the Mines of Wangara", and "Conqueror of Ghanata".

Musa conquered 24 cities, along with their surrounding districts. During Musa's reign, Mali may have been the largest producer of gold in the world, and Musa has been considered one of the wealthiest historical figures. However, modern commentators such as Time magazine have concluded that there is no accurate way to quantify Musa's wealth.

Musa is generally referred to as "Mansa Musa" in Western manuscripts and literature. His name also appears as "Kankou Musa", "Kankan Musa", and "Kanku Musa". Other names used for Musa include "Mali-Koy Kankan Musa", "Gonga Musa", and "the Lion of Mali". He helped his empire reach tremendous growth by encouraging the arts, literature and architecture.

Musa was a devout Muslim, and his pilgrimage to Mecca made him well known across northern Africa and the Middle East. To Musa, Islam was "an entry into the cultured world of the Eastern Mediterranean". He would spend much time fostering the growth of the religion within his empire.

Musa made his pilgrimage between 1324 and 1325. His procession reportedly included 60,000 men, all wearing brocade and Persian silk, including 12,000 slaves, who each carried 1.8 kg (4 lb) of gold bars, and heralds dressed in silks, who bore gold staffs, organized horses, and handled bags.