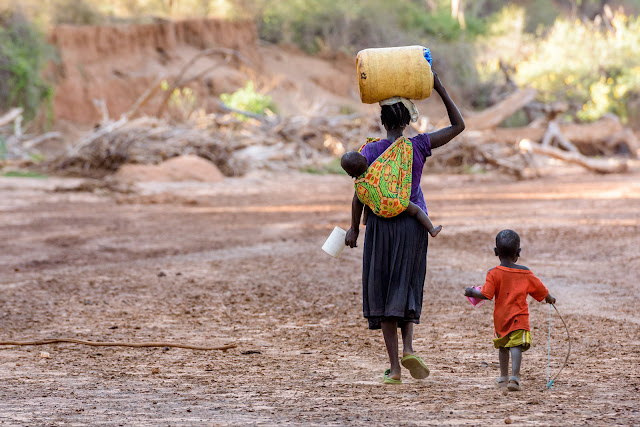 
out of poverty and suffering


We so recently shared: I say


why splash the muddy puddle on to


my bare legs as if still unsatisfied


with your seated opulence


you must sully the unwashed


with your diesel-smoke and mud-water.


and force him buy, beyond his means


a bar of soap from your shop?


a few years back we shared a master


today you have none, while I have


exchanged a parasite for something worse.


but maybe a few years is too long a time.

Pedestrian to passing Benz-man is an ironical poem by a Kenyan poet Albert Ojuka which compares and contrasts the rich and the poor in African societies. The poet suggests that the rising middle class in Africa is getting richer and powerful because of exploiting the poor people. The Benz-man in the poem arrogantly splashes the muddy puddle onto the legs of the pedestrians so that the pedestrian may go and buy a bar of soap from his shop. This is to say most of the problems facing poor people are caused by the rich who later turn them into opportunities for exploiting the poor people.

CLASSES
The poem depicts two classes in this society. The middle class as represents by the Benz man; this is a class comprising of arrogant people who own the major means of production and live luxuriously. The Benz-man for instance owns a shop and drives an expensive Benz.  On the other hand there is a class of poor people being represented by the pedestrian. This is a class comprising of people who not only walk on foot as their means of transport but also they can’t even afford to buy the shoes. Because of arrogance the Benz-man purposely splashes muddy puddle onto the bare legs of a pedestrian, so as to create a mechanism which will force the poor man to go and buy a bar of soap from his shop. Showing his dissatisfaction on the Benz-man’s arrogance, the pedestrian says:
Why splash the muddy puddle on to
My bare legs as if still unsatisfied
With your seated opulence

EXPLOITATION
In this society the poet shows that the rich are rich because of exploiting the poor. As seen in the poem the Benz-man exploits the pedestrian. The poet shows that the Benz-man creates a mechanism that will force the poor pedestrian to go and buy a bar of soap from his shop. The good thing however is that the pedestrian is aware of it. He says
Why splash the muddy puddle on to
My bare legs...
***
And force him buy, beyond his means
A bar of soap from your shop?
So the Benz-man has become a parasite that feeds on the sweat of poor people.

ARROGANCE
The rich man seems to be arrogant because the success he has achieved. He despises the poor people who walk on foot simply because he after all owns an opulent (luxury) Benz. He splashes the muddy puddle on to the pedestrian without considering that he makes him dirty (sully). The poet says;
You must sully the unwashed
With your diesel-smoke and mud-water.
This is not good for a society that needs to prosper in all spheres. The rich must respect the poor especially knowing that they are rich because of the poor.
POVERTY
The pedestrian represents poor people whose major means of transport is their own feet. These ones are looked down upon by those who have gently become rich and don’t want to share their wealth with the poor. The pedestrian is still living a poor life as he confesses in lines 1-3.
You man lifted gently
Out of poverty and suffering
We so recently shared:
This is to say he is still poor while the Benz-man has lifted himself out of poverty and he now has a decent life. The poet shows that the pedestrian cannot even afford to buy shoes but walks on bare feet.

GUIDING QUESTIONS
Ø  What is the poem about?
The poem is about comparison and contrasts between the rich and the poor classes in African societies. The poet suggests that the rising middle class in Africa is getting richer and powerful because of exploiting the poor people. This is to say most of the problems facing poor people are caused by the rich who later turn them into opportunities for exploiting the poor people.
Ø  What kind of the poem is this?
It is a sonnet poem as it is made up of 14 lines.
Ø  Who is the persona? How do you know?
The persona is a pedestrian from lower or poor class. This is evident as he complains because the Benz-man splashes the muddy puddle on to his bare feet.
Ø   What is the tone and mood?
The tone is lamenting and sad. The persona is sad because of the way he is mistreated by the Benz-man. This creates a sad and unhappy mood to the readers/listeners.
Ø  Comment on the structure of the poem.
The poem is made up of only one stanza comprising 14 lines with irregular rhyming scheme.
Ø  Comment on the language use in the poem.
The language used is simple and easy to understand. There is a good choice of vocabulary that drives home the message and the central theme easily. The use of words like poverty, suffering, bare legs all carry the picture of a low class or poor people.
Ø  Figures of speech.
Assonance.
Muddy puddle
Must sully
Rhetorical questions
And force him to buy beyond his means a bar of soap from your shop?
Onomatopoeia
Why splash –sound of water
Symbolism
A parasite stands for exploiter
MESSAGES
Ø  The high/middle class should consider the welfare of the lower class (majority)
Ø  Exploitation of the poor by the rich should be discarded
Ø  Betrayal is not good. It is better to help someone raise from poverty than despising them because of their poverty
Ø  Poverty makes people to be undermined and despised. We should fight against poverty.
Ø  It is not good to be arrogant when you are wealth remember the poor might be rich one day and you might be poor.
RELEVANCE
The poem is relevant in a number of ways.
Ø  In our societies there are people who are humble when they have nothing and are in need of help, but when they get rich they despise the poor.
Ø  Poverty is still a common problem in most African countries.
Ø  Exploitation of the poor by the rich class has not yet ended.