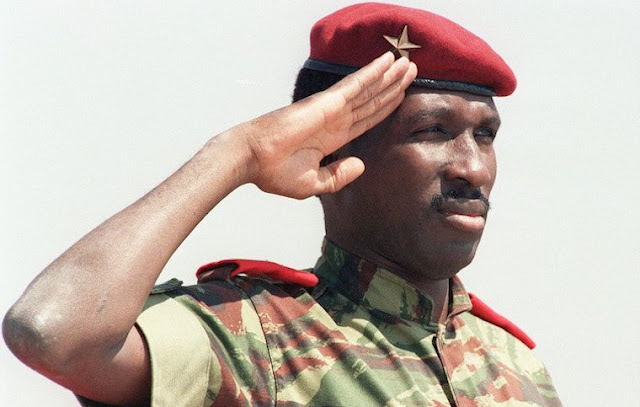 Thomas Isidore Noël Sankara (21 December 1949 – 15 October 1987) was a Burkinabé revolutionary and President of Burkina Faso from 1983 to 1987. A Marxist–Leninist and pan-Africanist, he was viewed by supporters as a charismatic and iconic figure of revolution and is sometimes referred to as "Africa's Che Guevara"

A group of revolutionaries seized power on behalf of Sankara (who was under house arrest at the time) in a popularly-supported coup in 1983. Aged 33, Sankara became the President of the Republic of Upper Volta. He immediately launched programmes for social, ecological and economic change and renamed the country from the French colonial name Upper Volta to Burkina Faso ("Land of Incorruptible People"), with its people being called Burkinabé ("upright people").

His foreign policies were centred on anti-imperialism, with his government eschewing all foreign aid, pushing for odious debt reduction, nationalising all land and mineral wealth and averting the power and influence of the International Monetary Fund and World Bank. His domestic policies were focused on preventing famine with agrarian self-sufficiency and land reform, prioritising education with a nationwide literacy campaign and promoting public health by vaccinating 2.5 million children against meningitis, yellow fever and measles.

His revolutionary programmes for African self-reliance made him an icon to many of Africa's poor. Sankara remained popular with most of his country's citizens. On 15 October 1987, Sankara was assassinated by troops led by Blaise Compaoré, who assumed leadership of the state shortly after having Sankara killed. A week before his assassination, Sankara declared: "While revolutionaries as individuals can be murdered, you cannot kill ideas".