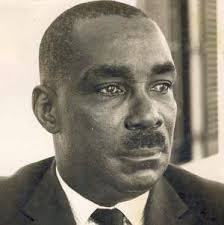 Abeid Amani Karume (4 August 1905 – 7 April 1972) was the first President of Zanzibar. He obtained this title as a result of a revolution which led to the deposing of His Majesty Sir Jamshid bin Abdullah, the last reigning Sultan of Zanzibar, in January 1964. Three months later, the United Republic of Tanzania was founded, and Karume became the first Vice President of the United Republic with Julius Nyerere of Tanganyika as president of the new country. He was the father of Zanzibar's former president, Amani Abeid Karume.

On 10 December 1963, the United Kingdom granted full independence to Zanzibar after the Zanzibar National Party (ZNP) and Zanzibar and Pemba People's Party won the elections. The Sultan was a constitutional monarch. Initial elections gave government control to the ZNP.

Abeid Karume led Zanzibar revolution on 12 January 1964, and became the first president of Zanzibar, and make the country free to all Zanzibaris.

Karume was assassinated in April 1972 in Zanzibar Town. Four gunmen shot him dead as he played bao at the headquarters of the Afro-Shirazi Party. Reprisals followed against people suspected to have been opposed to Karume's regime. Amani Abeid Karume, Abeid's son, was elected two times as the president of Zanzibar, in 2000 and 2005 by a popular majority and handed over power in late 2010 to his successor Ali Mohamed Shein.