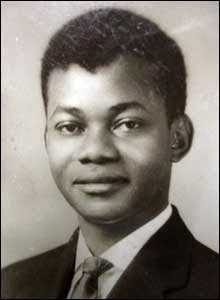 Oscar Salathiel Kambona was the first Minister of Foreign Affairs of Tanganyika. He is the second-most influential and most popular leader in the country after President Julius Nyerere.

Kambona was born on 13 August 1928 on the shores of Lake Nyasa in a small village called Kwambe near Mbamba Bay in the district of Nyasa near Songea in Ruvuma region southern Tanganyika. He died in London in November 1997.

Kambona became the secretary-general of the Tanganyika African National Union (TANU) during the struggle for independence and worked closely with Nyerere who was president of TANU, the party which led Tanganyika to independence. Tanganyika won independence from Britain on 9 December 1961. The two were the most prominent leaders of the independence movement in Tanganyika in the 1950s.

The two leaders had been close political allies and personal friends since the days of the independence struggle when they were the main leaders of the independence movement. In fact, when Kambona married a former Miss Tanganyika at a cathedral in London, Nyerere was his best man.

But the two leaders started drifting apart a few years after independence. The first rift occurred in 1964 during the army mutiny, and then in 1965 when Tanzania officially became a one-party state. As a cabinet member, Oscar Kambona supported the transition to a one-party state but did so reluctantly, only as a team player.

He was opposed to the change because he said there was no mechanism guaranteeing change of government by constitutional means in a country dominated by one party. He also contended that there were no constitutional safeguards to make sure that the country did not drift into dictatorship.

The next split with Nyerere came in February 1967 when Tanzania adopted the Arusha Declaration, an economic and political blueprint for the transformation of Tanzania into a socialist state. Kambona was opposed to socialism.

A few months later, in July 1967, Oscar Kambona left Tanzania with his wife and children and went into "self-imposed" exile in London.

He died in London in July 1997, almost exactly 30 years after he first went into exile in Britain in July 1967 where he lived for 25 years before returning to his home country in 1992 to spend the last few years of his life.

Despite his political misfortunes, Oscar Kambona will always be remembered as one of the most prominent leaders of Tanzania who also played a leading role in the struggle for independence and who relentlessly campaigned for the adoption of multiparty democracy in Tanzania.