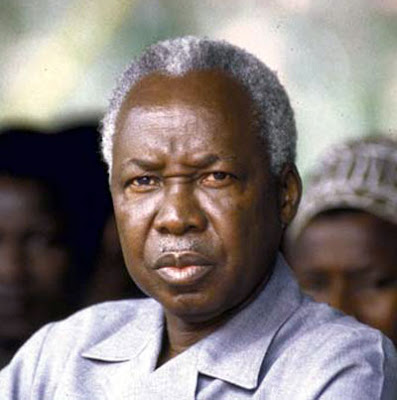 Julius Kambarage Nyerere (13 April 1922 – 14 October 1999) was a Tanzanian anti-colonial activist, politician, and political theorist. He governed Tanganyika as Prime Minister from 1961 to 1962 and then as President from 1963 to 1964, after which he led its successor state, Tanzania, as President from 1964 to 1985. A founding member of the Tanganyika African National Union (TANU) party which in 1977 became the Chama Cha Mapinduzi party—he chaired it until 1990. Ideologically an African nationalist and African socialist, he promoted a political philosophy known as Ujamaa.

Born in Butiama, then in the British colony of Tanganyika, Nyerere was the son of a Zanaki chief. After completing his schooling, he studied at Makerere College in Uganda and then Edinburgh University in Scotland. Nyerere then led TANU to victory at the 1960 general election, becoming Prime Minister. Negotiations with the British authorities resulted in Tanganyikan independence in 1961. In 1962, Tanganyika became a republic, with Nyerere elected its first president.

Following the Zanzibar Revolution of 1964, the island of Zanzibar was unified with Tanganyika to form Tanzania. After this, Nyerere placed a growing emphasis on national self-reliance and socialism.

Across Africa Julius Nyerere gained widespread respect as an anti-colonialist and in power received praise for ensuring that, unlike many of its neighbours, Tanzania remained stable and unified in the decades following independence. He is held in deep respect within Tanzania, where he is often referred to by the Swahili honorific Mwalimu ("teacher") and described as the "Father of the Nation".