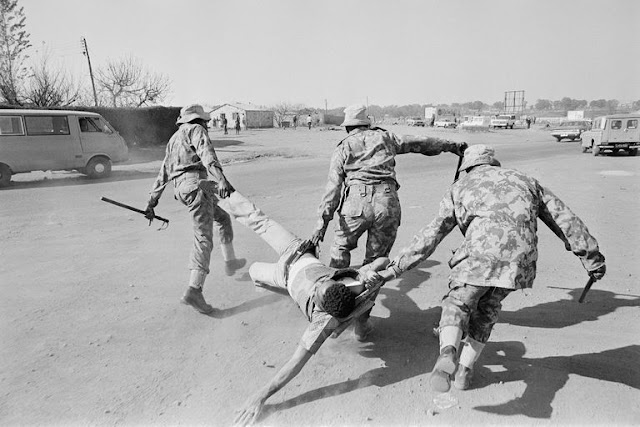 VIDEOS OF APARTHEID IN SOUTH AFRICA

Apartheid (segregation, "aparthood") was a system of institutionalised racial segregation that existed in South Africa and South West Africa (now Namibia) from 1948 until the early 1990s. Apartheid was characterised by an authoritarian political culture based on baasskap (or white supremacy), which ensured that South Africa was dominated politically, socially, and economically by the nation's minority white population. According to this system of social stratification, white citizens had the highest status, followed in descending order by Asians, Coloureds, and black Africans. The economic legacy and social effects of apartheid continue to the present day.

Broadly speaking, apartheid was delineated into petty apartheid, which entailed the segregation of public facilities and social events, and grand apartheid, which dictated housing and employment opportunities by race. Prior to the 1940s, some aspects of apartheid had already emerged in the form of minority rule by white South Africans and the socially enforced separation of black Africans from other races, which later extended to pass laws and land apportionment. Apartheid was adopted as a formal policy by the South African government after the ascension of the National Party (NP) during the 1948 general elections.

Between 1987 and 1993, the National Party entered into bilateral negotiations with the African National Congress (ANC), the leading anti-apartheid political movement, for ending segregation and introducing majority rule. In 1990, prominent ANC figures such as Nelson Mandela were released from prison. Apartheid legislation was repealed on 17 June 1991,[ pending multiracial elections.

Videos of Apartheid in South Africa