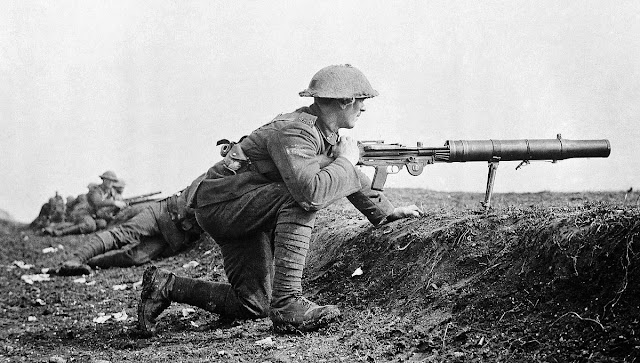 World War I (WWI or WW1), also known as the First World War or the Great War, was a global war that lasted from 1914 to 1918. Contemporaneously described as "the war to end all wars", it led to the mobilisation of more than 70 million military personnel, including 60 million Europeans, making it one of the largest wars in history.

It is also one of the deadliest conflicts in history, with an estimated 9 million combatant deaths and 13 million civilian deaths as a direct result of the war, while resulting genocides and the related 1918 influenza pandemic caused another 17–100 million deaths worldwide.

On 28 June 1914, Gavrilo Princip, a Bosnian Serb Yugoslav nationalist, assassinated the Austro-Hungarian heir Archduke Franz Ferdinand in Sarajevo, leading to the July Crisis. In response, on 23 July, Austria-Hungary issued an ultimatum to Serbia. Serbia's reply failed to satisfy the Austrians, and the two moved to a war footing.

The war began on 28 July 1914, Austria-Hungary declared war on Serbia following the assassination of Archduke Franz Ferdinand and his wife in Sarajevo.

A network of interlocking alliances enlarged the crisis from a bilateral issue in the Balkans to one involving most of Europe. The conflict, which became known as the Great War, was fought between two groups: the Triple Alliance – initially made up of Germany, Austria-Hungary and Italy; and the Triple Entente - made up of Great Britain, France and Russia (Italy changed sides and joined the Allies in 1915). The United States of America entered the war in 1917.

The First World War ended on 11 November 1918 when the Allies and Germany signed a ceasefire, or 'armistice’