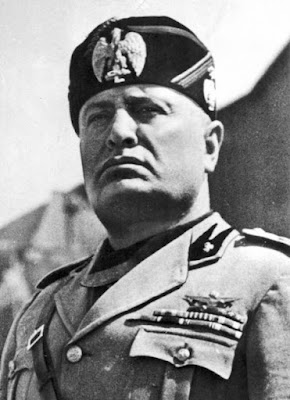 Benito Amilcare Andrea Mussolini (29 July 1883 – 28 April 1945) was an Italian politician and journalist who was the leader of the National Fascist Party. He ruled as the Prime Minister of Italy from the fascist coup d'état in 1922 until his deposition in 1943, and Duce ("Leader") of Italian Fascism from the establishment of the Fasci Italiani di Combattimento in 1919 to his execution in 1945 during the Italian civil war. As dictator of Italy and founder of fascism, Mussolini inspired far-right totalitarian rulers such as Adolf Hitler, Francisco Franco, António de Oliveira Salazar, and several others.

Mussolini's foreign policy aimed to expand the sphere of influence of Italian fascism. In 1923, he began the "Pacification of Libya" and ordered the bombing of Corfu in retaliation for the murder of an Italian general. In 1936, Mussolini formed Italian East Africa (AOI) by merging Eritrea, Somalia and Ethiopia following the Abyssinian crisis and the Second Italo–Ethiopian War.

At first, Mussolini disapproved of Germany’s Adolf Hitler, but over time their partnership grew and Mussolini embraced anti-Semitic measures.

By 1943, after years of fighting in World War II, Italy was viewed by its own citizens as losing the war. Allied forces barreled through Italy in June 1945. Mussolini attempted to flee to Spain with his lover, Claretta Petacci, but was discovered and arrested by partisans searching troop transport trucks.

Mussolini was executed by firing squad on April 28, 1945, shot by soldiers firing several bullets with four of them near the heart causing immediate death. The bodies of both Mussolini and Petacci were hung upside down at the Piazzale Loreto in Milan and displayed for crowds to kick and spit on.