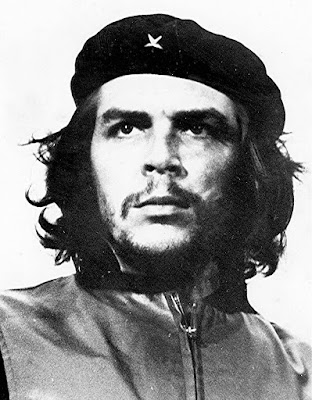 Che Guevara was born to a well-off family in Argentina. Although suffering from asthma, he excelled as an athlete and a scholar, completing his medical studies in 1953.

As a young medical student, Guevara traveled throughout South America and was radicalized by the poverty, hunger, and disease he witnessed. His burgeoning desire to help overturn what he saw as the capitalist exploitation of Latin America by the United States.

Che Guevara met up with Fidel Castro and his group of exiled revolutionaries in Mexico. Guevara played a key role in Castro’s seizure of power from Cuban dictator Fulgencio Batista in 1959 and later served as Castro’s right-hand man and minister of industry. Guevara strongly opposed U.S. domination in Latin America and advocated peasant-based revolutions to combat social injustice in Third World countries. Castro later described him as “an artist of revolutionary warfare.”

Following the Cuban Revolution, Guevara performed a number of key roles in the new government. These included reviewing the appeals and firing squads for those convicted as war criminals during the revolutionary tribunals, instituting agrarian land reform as minister of industries, helping spearhead a successful nationwide literacy campaign, serving as both national bank president and instructional director for Cuba's armed forces, and traversing the globe as a diplomat on behalf of Cuban socialism.

Guevara left Cuba in 1965 to foment revolution abroad, first unsuccessfully in Congo-Kinshasa and later in Bolivia, where he was captured by CIA-assisted Bolivian forces.

On October 9, 1967, socialist revolutionary and guerilla leader Che Guevara, age 39, is killed by the Bolivian army. The U.S.-military-backed Bolivian forces captured Guevara on October 8 while battling his band of guerillas in Bolivia and executed him the following day. His hands were cut off as proof of death and his body was buried in an unmarked grave.

In 1997, Guevara’s remains were found and sent back to Cuba, where they were reburied in a ceremony attended by President Fidel Castro and thousands of Cubans.

Following his death, Guevara achieved hero status among people around the world as a symbol of anti-imperialism and revolution. Time magazine named him one of the 100 most influential people of the 20th century. A 1960 photo taken by Alberto Korda of Guevara in a beret became iconic and has since appeared on countless posters and T-shirts.