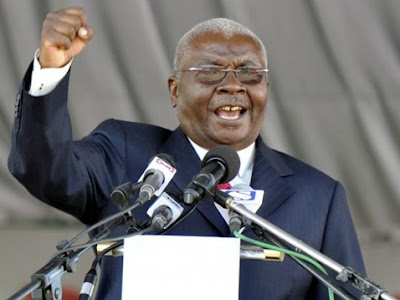 YOUR PAIN - by Armando Guebuza

This poem was written by Armando Guebuza born in 1942 during the struggle for independence in Mozambique. He was a FRELIMO militant from the early stages of the liberation struggles and the later Mozambican president. It expresses his deep concern about Mozambican independence and shows his belief in unity, armed struggle and sacrifice if the need be as the main weapons to overcome colonial rule and regain the lost independence.
Your Pain - by Armando Guebuza

Yet more my pain
Shall suffocate oppression

Your eyes
Yet more my eyes
Shall be speaking of revolt

Your scars
Yet more my scars
Will be remembering the whip

My hands
Yet more your hands
Will be lifted fully armed

My strength
Yet more your strength
Shall overcome imperialism

My blood
Yet more your blood
Shall irrigate our victory.

Armed Struggle/Revolution
This is a situation in which people try to change a government, often using violence, or in which they refuse to accept someone's authority. Armando Guebuza believes deep down his heart that the only way to acquire their lost independence is through armed struggle. Most of the Portugal colonies gained their independence through armed struggle and Mozambique is no exception. He suggests in stanza two that their eyes should be speaking of revolt (revolution) but speaking alone is not enough in stanza 4 he suggests a more practical method;
My hands
Yet more your hands
Will be lifted fully armed

Sacrifice
This is the act of giving up something that is valuable to you in order to achieve something else. In the process of fighting for one’s rights and freedom against the imperialists there are those who lose their lives. Sometimes that is the only possible means available and their deaths are noble. The poet postpones this theme until the last stanza to suggest that if the need be, they must be ready to die as the last option because their blood will irrigate their victory. He says this in the last stanza;
My blood
Yet more your blood
Shall irrigate our victory.

Unity
It is a situation in which everyone agrees with each other or wants to stay together with others. In this poem the poet is advocating for national unity. It is interesting however to note how he structures his phrases in addressing his fellow oppressed.

Colonialism
The poem was written at a time when most African countries were under colonial regime and it inevitably addresses not only the Portugal Mozambique but also any other country that was under colonial influence. The Africans were subjected to harsh conditions and terrible mistreatments to a point that armed struggle was the only means sought possible to remove the colonialists especially in colonies where settler economy was established. That’s why Guebuza suggests;
My strength
Yet more your strength
Shall overcome imperialism

Oppression/Torture
Africans were subjected to severe torture, oppression, exploitation and all forms injustice during colonialism. They were made to work for long hours and in the process they were whipped. Even after the attainment of political independence Africans were left with scars that remind them of the torture and oppression they went through as symbolized by the “whip”. They experienced severe pains as a result of oppression as the poet observes;
Your pain
Yet more my pain
Shall suffocate oppression

1. What is the poem about?
The poem is about the torture and oppression that Africans went through during colonialism. It further suggests that to get rid of colonialism unity, sacrifice and armed struggle must be used as the possible means.

2. What type of poem is this poem?
It is a lyric poem of a didactic type as it is used to give instructions on what is to be done in order to overcome the imperialist injustices and regain their independence.

3. Who is the persona? How do you know?
The persona in this poem is a (militant) freedom fighter who is among the oppressed individuals in his society. This is shown by the way he addresses his fellow oppressed to join him and fight against imperialism.

4. Comment on the tone of a persona in this poem
The tone is sad and angry at the imperialists he created an angry and hatred mood towards the colonizer.

5. Comment on the language use in the poem.
The language used is not only simple and easy to understand but also the choice of vocabulary is carefully done to make sure that the audience gets the message across. The use of words like, oppression, scars, imperialism and whip send the message directly that these people were under severe injustice. The use of words like, your and my (unity), blood (sacrifice), revolt and fully armed suggest the proper methods of fighting for their independence.

Furthermore, the poem is not without Figures of Speech. He has employed the following figures of speech

a) Personification.
There are several items that have been given human qualities in the poem;
Pain to suffocate oppression.
Eyes to speak of revolt.
Scars to remember the whip.

b) Symbolism.
The poem has also employed several symbols that represent different concepts;
“Scars” are used to represent the effects of colonialism on African continent.
“Eyes” are used to symbolize consciousness or awareness of what is going on.
“Whip” represents colonial torture and injustice that Africans went through.
“My and your” are symbols of unity.
“Blood” symbolizes death or sacrifice.

c) Imagery
The reader is made to visualize on several pictures that come to mind. There are several images in the poem;
Organic image – this is an image of feeling. The poet evokes the image of feeling by using words like pain, oppression and whip.
Visual image – this is an image of sight. He makes the reader visualize an army of soldiers with their hands lifted full of armoury preparing for an attack.

d) Reiteration
The words “My” and “Your” have been repeated throughout the poem to underscore the importance of unity in this struggle.

6) Suggest the messages we learn from this poem.
i) Unity is very important in any struggle.
ii) We must be read to sacrifice ourselves because it can be the only possible means to get our rights.
iii) We must fight against all forms of injustice, oppression and exploitation in our societies.

7) Is the poem relevant to our society today?
Oh yes it is! There are still cases of oppression, exploitation, torture and injustice reported every day.
i) Some workers especially domestic workers are mistreated by their masters or mistresses.