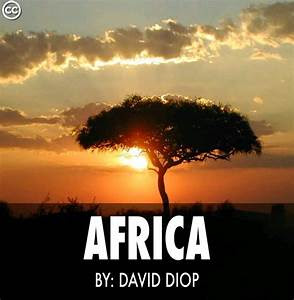 David Mandessi Diop was a revolutionary African poet born in France to parents of West African descent, and an active member of the Negritude movement. Diop’s poems highlight African problems brought about by colonialism and give a message of hope and resistance to people of the continent.


Mandessi published only one book of poetry on which his fame rests. After the independence of Guinea, he went to work there as teacher. He died in a plane crash in 1960 together with his wife. The manuscript of his new book of poetry was also lost in the crash.

Your beautiful black blood that irrigates the fields
The blood of your sweat
The sweat of your work
The work of your slavery
The slavery of your children
Africa tell me Africa
Is this your back that is bent?
This back that breaks under the weight of humiliation
This back trembling with red scars
And saying yes to the whip under the midday sun
But a grave voice answers me
Impetuous son that three young and strong

PHRASE
The poem is about a person who has lived away from his continent (Africa) therefore he does not know it well.
The person laments about suffering of Africans who works like slave and their blood and sweat plus those of their children irrigate the fields. The person compares Africa with an impressive lonely tee in the middle of the white and fade fowlers. The tree(Africa) has produced fruit which has gradually acquired the test of Liberty

1.   EXPLOITATION
The persona portrays the exploitation done to the Africans who was treated like slaves because they worked and sweated for their masters to enjoy. For instance in stanza two
“your beautiful……………………
The message we get from this poem is that
All forms verse of exploitation should be banned in the society

2.   UNITY
We see the essence of unity as the oppressed Africans who decide to mobilize themselves and form the warriors in order to fight for the liberation of their continent for instance in 1st stanza the 2nd the persona says
“Africa of proud warriors in ancestral savannahs". The message is that, unity is important to the oppressed so as to end oppression in the society

3.   DEHUMANIZATION
The personal shows humiliation to Africans as the Africans were treated as if they are not human. While they are in their own continent. For example in 3rd stanza verse 1,2,3 and the person says,
“ is this your back that is bent?
This back that breaks under the weight of humiliation.
This back trembling with red scars,
and saying yes to the whip under the midday Sun".

The message from this theme is that, all people are the same under. The sun so they deserve equal treatment

4.   AWARENESS
This show that the person has realized that though he was not born and grew in Africa still he is an Africa because of the African blood which flows in his vein. As we observe it in 1st stanza, 5th and 6th verses. The message we get is, "we need to be aware and proud of our origin".

5.   SACRIFICE
The poet shows sacrifice made by African warriors who were whipped and shed their blood in ancestral savannahs, the savannah where their blood irrigated the fields but they never give up the fight. We observe this in 1st stanza the 2nd verse.
The message we get,
“we need to sacrifice ourselves for the betterment of the society".

6.   ALIENATION
The poet shows alienation of those who were born and live in foreign countries like the poet himself so these people who are born and grow in Diaspora they find themselves alienated because they do not enjoy the way indigenous do in their home countries in 1st stanza the 5th verse the personal says
“I have never known you”

In this verse we see that the poet he could know his place of his origin and enjoy his home land as the whites do in their home land.

The message from this theme is that “people should remember their place of origin even if they are born and grow in other places which are not the place of their origin".

7.   LIBERATION STRUGGLE
In this poem we see movement done by the African warriors so as to get rid of the colonial regime. For instance in 4th stanza the last four verses the person says
“That is Africa your Africa
That grows again patiently obstinately
and its fruit gradually acquire the bitter test of Liberty”

The message from this theme is that, “mobilization, self-sacrifice and until are very important when struggling for liberation in any society.

This back that breaks under the weight of humiliation”

iii) ASSONANCE
This is the repetition of similar vowel sounds in the same verse. For example the 1st stanza verse 4 in the words “distance” and “on the banks of the distance river”

SYMBOLISM
The poet uses the words like
“red scars to symbolize suffering (oppression which is done to Africans.
The 3rd stanza verse 3)
“this back trembling with red scars”

USE OF IMAGERY
Visual image where we see the poet use lonely tree represent Africa
Image of taste, the poet use words like “the bitter taste of Liberty” this show this reflects the bitter feeling that African warriors had against the colonialist. For instance the last stanza in the last verse

Mood of the poem
The mood of the poem can be sad or sympathetic due to exploitation, humiliation, oppression etc done by the colonialists

Tone of the poet
The tone is bitter this is due to the fact that the themes revealed tell about the condition of the oppressed Africa.