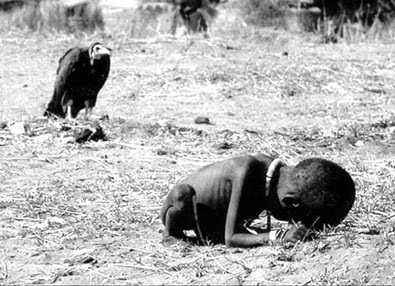 This is a poem written by a Tanzania poet, Freeman Peter Lwamba. The poem depicts the disillusion of the poor class after independence. It shows that those in the poor class are still living a miserable life and that the Uhuru (Independence) promises have no value to them. The mother is so pessimistic and hopeless that she may not be able to live longer with her son because they have no food. This is the kind of disillusion that most African leaders have created to the common people.

Thin and red,
Skinny and bald,
The boy groans on the ground.

Swollen stomach
Full of waste,
Thin legs,
Thin arms,
Twitch
As the boy
Fights with flies
Over the empty plate.

Ten years old,
He looks older than ten,
And younger than young,
And so small
As he wriggles,
Prisoner
Of his unproportioned body.

“Mother,” shouts the boy,
“when I grow up
I will carry a gun
And not a pen”

“My son,” shouts the mother,
“My son,” cries the mother
“You will never live to carry a gun
There is no meat for us”
PARAPHRASE
The poem is about a ten year boy who suffers from Kwashiakor caused by Malnutrition, where we see the boy is busy fighting with flies over the empty plate. The boy is thin. Bald red skin, has thing leg and arms .

The boy has swollen stomach which is full of waste which makes the boy groans on the ground because of his imbalanced/proportioned body.
We see the boy who is ten years old but he looks older than his real age. The boy has vagence mind hence he tells his mother that when he grows up he will carry a gun and not a pen but the mother shouts to her boy that he will never live to carry a gun as there is no meat for him to make him survive. This shows that the mother is disillusioned.


Also we see the boy is busy competing with the flies over the empty plate. All these are the indicators of poverty. As it is shown in 1st stanza the 10th and 11th verses
“the message we get from this is that, "people should work very hard so as to get enough money to buy balanced diet for healthy of our families”

2.   Classes
In this poem we see that the poet depicts the existence of classes in the society. That is the people who can afford to eat meat. In the 2rd stanza the 15th and 16th verses the mother tells her son that he will never grow up to carry a gun because there is no meat for them “you will never live to carry a gun there is no meat for us”
The message from the above theme is that, every human being has to eat a balanced diet for good health and longer life. Also classes are not good in the society as they may cause disunity among people within the society

3.   Disappointment
In this poem we see the essence of disappointment as we observe this through the mother who tells her son that he will never live to carry a gun this shows that the mother is disappointed hence she believes that her son will not live longer as they are eating unbalanced diet. In the 2nd stanza the 12th, 13th, 14th and 15th verses.
The message we obtain here is that, “we should never accept failure in our lives instead we should fight to the last minute"

4.   Awareness
We see that the boy has realized that changes in the society can be brought through the use of gun or by force and not peacefully means or education for example in the 2nd stanza, the 8th, 9th and 10th verses.
Also the awareness of the mother that her only son can not live to carry a gun be he will not live longer.

SENSE DEVICES
Imagery
The poet draws the mental picture so that we see the dying child as the son has thin arms swollen stomach, thin leg and has unproportioned body also we see the image of the groaning and staving child who is fighting with flies over the empty plate due to shortage of food as a result of his poor family

Diction
The choice and arrangement of words in a poem in this poem we see that the poet is real struggling to use words which will effectively convey what the intended to the society, so while reading any poem one need to be very keen in making sense of the words used as they both have exactly meaning and connotations. For example words like “skinny”, “bald” “thin” swollen stomach, “flies” and “pen” they are all used in associate meaning. For example from the poem the word “flies” in the 1st stanza the 9th stanza associate with dirty or rotten

SOUND DEVICES
Alliteration
In the 1st stanza the 3rd verse the words “groans” and ground the consonant/g/is repeated. Therefore alliteration is used to show emphasis but also create the rhythm of the poem
‘the boy groans on the ground’
In the 1st stanza the 4th verse the word “swollen “and “stomach” also alliterate because they both begin with consonant sound/s/ This repetition is made intentionally to emphasize the concept of poverty, malnutrition and the suffering of the boy
“swollen stomach"

STRUCTURAL DEVICES
Use of stanza
The poem has two stanza. The 1st stanza has 11 verses and the 2rd stanza has 15 verses

Parallelism
In 2nd stanza the 13th and 14th verse are parallel
The verses have similar structure to emphasize the disappointment of the mother who sees the suffering of her dying child
“my son, shouted the mother
My son cries the mother”

Repetition
The word “thin is repeated in the 1st stanza in the 1st, 6th and 7th verses to express the horrible condition of the boy. This repetition helps the poet to evoke the feeling of sympathy towards the referred boy
“Thin and red...
Thin leg
Thin arms"

Dialogue
The poet uses the dialogue between the boy and the mother, this is made to reveal the real situation of the mother and his son. As we see in the 2nd stanza, the 8th , 9th, 10th, 11th, 13th and 15th verses the poet says
“Mother, shouted the boy
When I grow up
I will carry a gun
And not a pen!
“my son, shouted the mother
my son, cries the mother
“you will never lie to carry a gun
there is no meat for us”