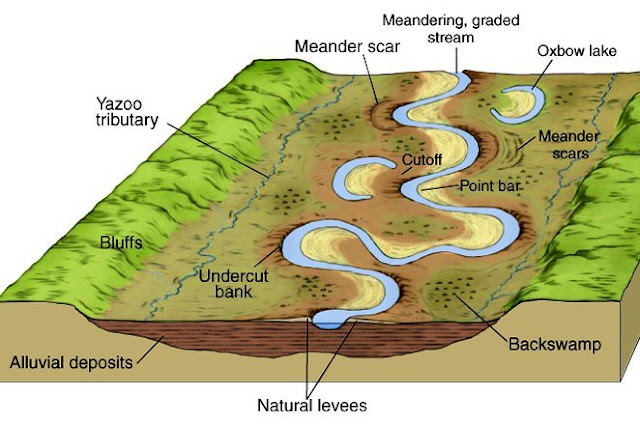 Soil is the material found on the surface of the earth that is composed of organic and inorganic material. Soil varies due to its structure and composition.

- Or, Soil is a mixture of organic matter, minerals, gases, liquids, and organisms that together support life.

b) Importance of Soil

Soil is virtual life support to both flora and fauna organism ,because all the organisms depend on the soil as their source of food. Soil is therefore important to both plants and animals life in various ways including the following:

i) Animal life support
Soil acts as plant habitat in which animals uses plants as food for their survival.

ii) Building materials
Soil is used directly in making of bricks, tiles and white wash, The materials are the used in building of houses ,bridges and other structures.

iii) Source of minerals
Some soils contains minerals which can be extracted for commercial purposes. For example: Titanum is obtained from soil deposit of Kwale near Mombasa in Kenya, Bauxite which is mined in Guinea in West Africa

iv) Cultural and medicinal values
Some soils are cultural value in some communities e.g red ochre and clay are used for body decorations by Maasai communities and clay mixed with herbals and being used for medicines

c) Sources of Soil Nutrients include:

4. (a) Compound bar graph is a method of data presentation that involves construction of bars which are divided into segments to show both the individual and cumulative values of items.

(i) COMPOUND BAR GRAPS TO REPRESENT CASH CROPS PRODUCTION (in “000 tonnes) IN EAST AFRICA IN THE YEAR 2000. 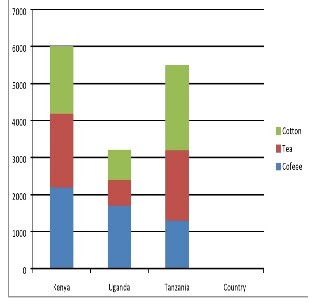 (ii)  Four merits of using compound bar graph are
·          It is easy to read and interpret as the totals are clearly shown.

5. (a) (i) Population in  research is generally a large collection of individuals or objects that is the main focus of a scientific query. It is for the benefit of the population that researches are done.

(ii) Random sampling is a type of probability sampling where by every individual an equal chance to be selected in a sample has. This technique involves selecting a sample randomly from the sampling frame without replacement. E.g. it is very common in Lottery’s such as Bingo and communication companies.

(iii) Literature review involve readings of various publications to know what other scholars/researchers have done about what you are investigating. It enables the researcher to gain experience, to decide a good method to be a used, to identify the weakness and success of other researchers. Sources of literature reviews are journals/reports, books, internet.

(b) (i)  secondary data is the data collected from documents. Example; through books, journals, economics, survey, census report, official report.

(ii)  Contour and irregular object may be represented accurately.

(iv) No great skill is required for satisfactory map.

(v)  Field book is not necessary.

(i) Hills due to the presence of contour line and Hill names such as Elgeri Hill, Kivetek Hill, Lemugul Hill etc on a map.

(ii) Valley due to the presence of long narrow depression in between two Highland at grid references 315252.

(c) 2centimetrers on a map represent 1kilometre on actual ground.

8. Study carefully photograph provided then answer the questions that follow: 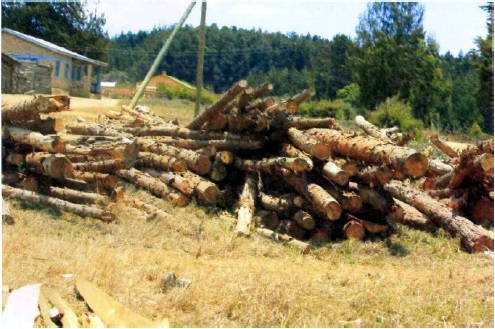 a) Suggest the title of the photograph
Ground Photograph

c) Outline three ways of interpreting the photograph
The photograph given is GROUND PHOTOGRAPH, it is interpreted by looking the following ways:
1. If horizon easily seen at the backward of the photograph.

(ii) Give two uses of the product in the middle ground of the photograph
- They are used as building materials, e.g: poles
- They are used in making furniture, e.g: tables, chairs

9.     Tourism refers to the travel of people away from home to other place for recreation, leisure, religious, family, or business purposes, usually of a limited duration. Tourism involves visiting places of interest like wildlife, beaches, museums etc.

Tourism industry is the people activities and organizations involved in providing tourism services for people on holiday, for example hotels, restaurants, and tour guides.

Seven ways of improving tourism industry in Tanzania are

(i)  The ministry of Natural Resources and Tourism, through Tanzania Tourist Board (TTB), must promote Tanzania’s tourist attractions through conducting publicity campaigns, preparation and publication of destination brochures and provision of tourist information.

(ii)  Improvement and development of transport and communication infrastructures, particularly in areas with tourist attractions, in order to make these attractions accessible from the town centers.

(iii) Tourism resources such as national parks and game reserves should be protected from human encroachment. Also the environment on which the animals thrive, such as natural vegetation and water resources should be conserved.

(iv) There is need to identify and develop tourist attractions and improve the existing ones so as to diversify the tourist activities. Special emphasis should be put on improvement of pre-historical and archaeological sites, most of which are in very poor states.

(v) The level of hospitality to tourists must be improved through training of the tourism personnel so as to meet the world’s standards.

(vi)  Attracting both local and foreign investors to put up facilities such as hotels, motels, lodges, etc. for tourists.

(vii) The political stability, peace and tranquility should be maintained to ensure maximum security to tourists.

(i) Recycling of industrial`s waste products rather than dumping them to the environment.

11.   Population is a number of people, animals and plants (living things) living a certain area. Or the inhabitants of a particular place.

Five uses of population data to a country are

(i) Population numbers and density enable the government to plan on low to allocate resources.

(ii) Data birth and death rates as well as fertility and mortality enable government to plan how to provide medical services and health education, especially where the death rate is very high.

(iii) Data on migration can enable a government to plan how to curb influx of people into urban areas from the rural regions if corrective measure are taken, loss of man power in the rural areas would be curbed as well as reducing influx of immigrants in urban centers.

(iv) Knowing the number of dependents enable the government to plan for expansion of schools, medical and other social amenities to take care of large number of children below the age of 15.

(v)  It enable planning for creation of jobs, population census data provide information about overpopulation and under population.

12.  A city is a large human settlement

Six problems associated with expansion of cities in Tanzania are

(iii) Overcrowding/over population leading to the crimes such as prostitution, robber and theft.