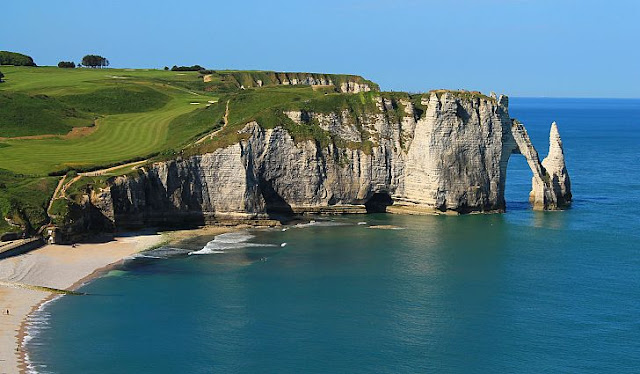 i) Antecedent drainage system is a system and drainage in which a river maintains its original direction of flow across land that is undergoing uplift. The soil formed is weak and it is easily eroded by the rivers.
Example of rivers which shows antecedent drainage is The Great Ruaha to the North-East of Iringa, between Mtera and Kidatu in Tanzania.

ii) Superimposed drainage system develops when a river originally flows over rocks of uniform structure in to which it is down-cutting. The rivers have high erosive power so that they can cut through the underlying strata.
- Example of rivers show this system of drainage is the River Nile in the North of Khartoum, has cut the Sabaloka Gorge in the Sabaloka Hills.

b) Explain the Process of River Transport and describe four ways in which a river transports its load.

River Transportation is the process whereby the rock materials that have been eroded from the sides of the rivers of the river channel as well as its bed are removed and carried away by the water.

A river uses its energy to carry or transport eroded materials such as mud, sand, boulders and dissolved materials. These materials are called its load. 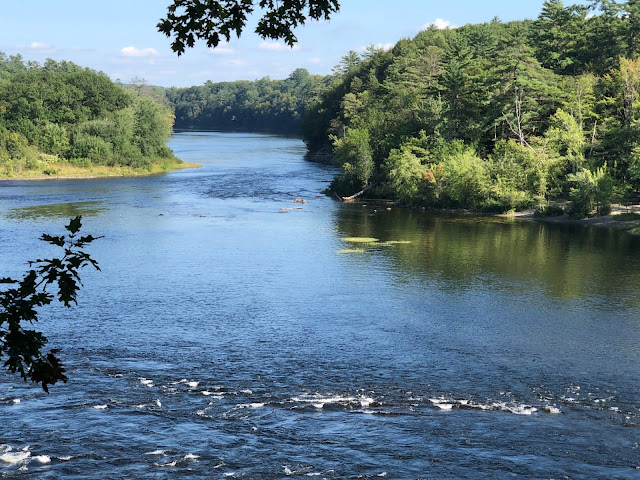 The factors that influence the ability of a river to transport its load are:

i) Volume of water. The larger the amount of water in a river, the greater amount of load it can carry. When the volume is small, limited quantities as well as varieties of load are carried.

ii) Gradient and velocity. Since the gradient determines the velocity of a river, the steeper the gradient, the faster the river flow. A fast flowing river can carry a greater amount and variety of the load.

iii) Nature and amount of transportation. Very small and light particles can be transported over long distances while large and heavy materials are carried for short distances. 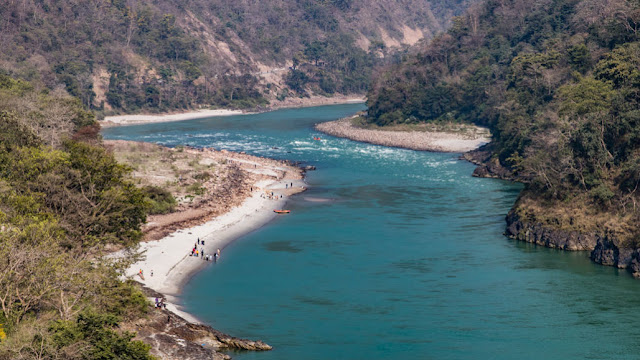 The Processes of River Transportation

River transport their load by four processes. These processes are traction, saltation, suspension and solution.

Saltation: Large particles such as gravel and coarse sand are lifted and dropped along the river, so they bounce along the river bed in a series of bed.

Traction: Heaviest material is rolled along the floor (bed) of the river.

Solution: Dissolved materials containing minerals like calcium and sodium are carried in the water. Trying to look out for these type of load in a river? Too bad, they cannot be seen by a naked eye.

Suspension: Smaller particles such as clay, silt and fine sand are carried along without contact with the river bed.  Materials carried in suspension usually forms the greatest part of the total river bed. 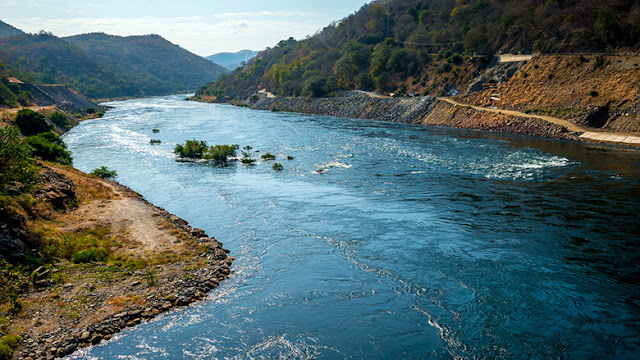 4. a .(i).  A simple divided circle is also known as pie chart, circle chart or pie graph. The chart involves dividing the circle into “pie slices” to represent and show relative sizes of data. The size of each slice or segment is always proportional to the value it represents.


b.(i) To draw the above bar graph to a simple divided circle by showing all the procedures.

Step 2: Change number of production of crops into degree.

Step 3: Draw a circle of a reasonable size.

Step 4:  Using a protractor, draw a radius from the 6 o’clock mark to the centre of the circle.

Step 5:  Starting with the largest segment representing a specific component, measure and draw its angle from the center of the circle.

Step 6:   Do the same for other components in ascending order.

Step 7:   Divide a circle into segments according to the sizes of the angles.

Step 8:   Shade the segments and write the title and key of the drawn graph. 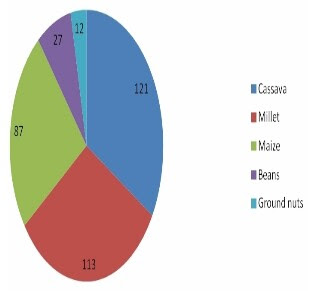 (ii) Two possible factors for variation of crops production  are

5. (a)   four objectives of doing research in Tanzania are

(i)  To describe about certain phenomena

(ii)  To search for a new knowledge/insights.

(iv)  To test hypothesis so as to find out their reliability.

(v)  To be familiar with a certain phenomena

(vi)  To find solution to the existing problems.

(vii)  To make evaluation of a certain issue.
(b) Description of the following terms as used in research:

A case study is an account of an activity, event or problem that contains a real or hypothetical situation and includes the complexities you would encounter in the workplace. Case studies are used to help you see how the complexities of real life influence decisions.

A feasibility study is an analysis of how successfully a project can be completed, accounting for factors that affect it such as economic, technological, legal and scheduling factors. Researcher use feasibility studies to determine potential positive and negative outcomes of a project before investing a considerable amount of time and money into it.


Participatory observation.
Is one type of data collection method,  In this method the researcher becomes part of people under study he/ she participates fully on a particular event.

This is an assumption used on what one expects to find out in the field it can be either true or false or Hypothesis is a prediction of outcome of the results. It is the statement of expected results. Research hypothesis is usually tested before the study begins. E.g. Poor students classrooms attendance results to poor academic performance. The hypothesis are; -Involvement of students in economic activities. -Poor family income. -Poor parental care.

Research problem is the question that researcher want to answer or to solve.

Research problem is a statement about an area of concern, a condition to be improved, a difficulty to be eliminated, or a troubling question that exists in scholarly literature, in theory, or in practice that points to the need for meaningful understanding and deliberate investigation.

6. (a) Two major forms of measurements in land surveying are

(i) Chain or tape surveying

(b)(i)  leveling is the procedure by which the heights of the points on the Earth’s surface are determined.
(ii)four significances of leveling are


·         It help the surveyor or cartographer to make contour maps of the land sea surface. This is because it determine the benchmark

·         Leveling can be used for determination of heights or elevation of the land surface such as hills, valleys, plans, etc.

·         Housing foundation, the location of industrial sites, the route of communication and sites of building can be located and determine with the help of leveling.

·         It help contractors to lay a level ground on which they can elect the building.


(e)  Four supportive contents of a topographical map provided are

(f) Three factors which affected the contents of the map are


8. Study the photograph given below then answer the questions that follow: 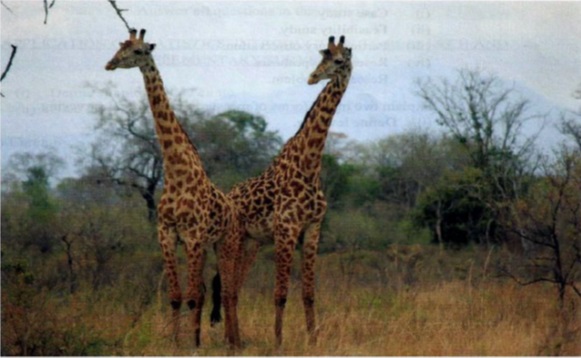 a) Name the type of photograph
Ground Photograph

d) In three points, describe the importance of vegetation shown in the area
- Providing food and habitats for the animals like giraffes, buffaloes, elephants
- Providing habitats for the animals like monkeys
- Providing medicine like of natural herbs
- Source of Rainfall this is giving off vapour to the sky through stomata
- Oxygen, vegetation releases oxygen and sequesters carbon.
- Soil development, vegetation  affects soil development over time, generally contributing to a more productive soil.

9.  Mining Is the extraction of valuable minerals or other geological materials which form the package of economic interest to the miners.

Six factors that determine exploitation of minerals in a country are

Six factors that hinder development of river transportation in Africa are

11.   Floods refers the period of high river discharge or over flow of water along the coast due to extremely high tides and storm waves.

Five measures to control floods to the environment are

(i). There should be proper management of the watershed catchment areas through planting trees people should be allowed to settle in the catchment areas
(ii). Construction of dams across the river channels helps in combating the problem of flood which affects the low land areas.
(iii). The stream of the rivers should be deeper widened and straightened so as to increase the speed of the river down the slope to the sea.
(iv). People should be frequent inspection and cleaning of the drainage by flooding.
(v). There should be frequent inspection and cleaning of the drainage system.
(vi). Availability of rescue team which is skilled and actives in rescuing people affected by floods
(vii). International cooperation should be intensified so as to improve the techniques of combating this environmental problem.

Eight problems associated with growth of urban settlement are