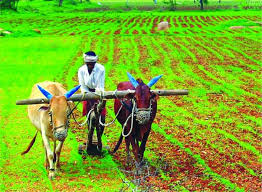 3. (a) A soil profile is a vertical cross-section of the soil, made of layers running parallel to the surface. These layers are known as soil horizons. The soil profile extends from the soil surface to the parent rock material. 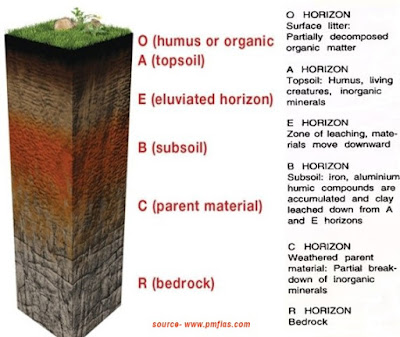 Soils are a product of their own environment, as their formation tends to vary from place to place depending on various obtaining factors. There are several factors which influence soil formation these are as follows

2. Climate
The most variable elements under climate are temperature, precipitation (rainfall) and wind. Temperature affects decomposition of organic matter hence it influences the development of soil profile Rainfall and wind encourage the formation of soil due to their role in the erosion process On the other hand rainfall adds moisture which encourages chemical and physical weathering

3. Living Organism
Some plants have nodules with bacteria which add nitrogen into the soil hence improve aeration of soil. Microorganisms are active in the decomposition of the organic matter to form humus on the other hand barrowing of animals and plant roots facilitate the state of both physical and chemical weathering hence lead to the formation of soil easily.

5. Time
This involves the duration that has been taken in the process of soil formation. Time determines the maturity of soil, when soil formation has taken a long time, soil tends to be mature i.e. they are deep and well developed. 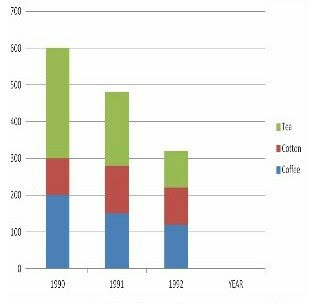 (b) Three (3)  Value of compound bar graph are
(i)   It is easy to read and interpret as the totals are clearly shown.
(ii)  It gives a clear visual impression of the total values.
(iii) It clearly shows the rise and fall in the grand total values.

On the production of Cotton

On the production of Cotton

On the production of Tea

(i). To increase and improve the measures of effectiveness of road safety Education,

(iii). To strengthen the management of road transport safety.
(b)  Three methods might be used in collecting data are

(i).  Shortage of resources

6. (a). Survey defined as the science of measuring and recording distances, angles and heights on the earth's surface to obtain data from which accurate  plans and maps are made.

(b). Different between chain survey and leveling

Chain Survey is the method of surveying in which no angle are measured but  only linear measurement is taken in the field by using chain or tape measure.

Leveling is the procedure where only height of a points on the earth's surface are determined.
(c). Four(4) ways in which chain survey is significant in day to day life of a human being

Plane table survey is the method of survey where position of objects are fixed by the use of plane table. Using plane table survey, a complete map can be produced during the survey in the field. In this case this method is considered to be an accurate and rapid way of positioning of distant objects.
(ii). Chain or tape survey

Chain Survey is the method of surveying in which no angle are measured but  only linear measurement is taken in the field by using chain or tape measure.  It measures the series of straight line on the ground using chain or tape measure and all fixed points relative to the line of traverse either by right angle (offsets). Instruments used in chain survey are chain, tape, ranging pole, arrows, pegs, surveyor's band, cross staff and a hand pencil
(iii).  Prismatic compass survey.

Prismatic compass survey is one that is used in land surveying l. It is also one of the easiest of survey technique . the compass can be used for measuring the angles in a traverse used for navigation purpose. As compasses have relatively poor direction accuracy, they are typically used for reconnaissance survey.

(iv).  The technique of levelling

Levelling is the procedure where only height of a points on the earth's surface are determined.

By using a piece of paper the map distance of tax is 21.8cm.

(c).  The relief features to guide the tourists visiting the mapped area are

(i).  Hills example lukoka hill and

(ii). Depression due to presence of contour line show depression

(d).  Four (4) economic activities of the people on the map.

(i)    Industrial activities due to the presence of factory on a map.

(ii).  Fishing activities due to the presence of dam and swamp example Pangani or Ruvu on a map

(iii). Transportation activities due to the presence of road and railways light on a map

(iv).  Agriculture activities due to the presence of scattered cultivation on map.
(e). The following are the  ​three (3)​ reasons which have encouraged people to establish the settlement.

Dam and swamps are important because they provide water for domestic, industry and irrigation purposes. Dams often also provide hydroelectric power production and river navigation. Domestic use includes everyday activities such as water for drinking, cooking, bathing, washing, and lawn and garden watering. Dams and their reservoirs provide recreation areas for fishing and boating.
(ii).   Availability of Hill

Hills have an extremely important role in influencing global and regional climates and weather conditions.

(f)    The following are the main features found at grid references

8. Study carefully the photograph given and answer the question that follow: 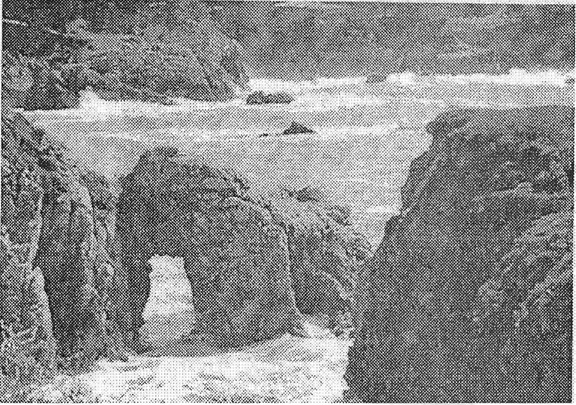 c) How are the features named in (b) above formed?

d) What are the economic importance of the features found on the photograph?

9. Natural resources refer to the materials or substances such as minerals , forests, water and fertile land that occur in nature and can be used for economic gain.

Forest is a large area dominated by trees.

(iii).  Forests help in the modification of environmental conditions such as temperatures and moisture content of the atmosphere and soils.

(iv).  Some tree species such as the African blackwood or ebony( mpingo) and brachystegia is very much favored for its uses in making curved ornaments

(v).   Forests are important for making herbs and traditional medicines among some tribes for examples the barks of the baobab tree and the mahogany .

(viii).  Forests helped the development of the industrial sectors by facilitating the establishment of wood based industries.


10. Mining is defined as extracting metals and minerals from the Earth. Example of the minerals extracted from the earth are gold, Tanzanite, copper etc.
Small scale mining refer to the mining practiced by individuals, groups or communities often informally (illegal ) and in developing nations. It is sector has not been adopted as its legal status.
The following  are five (5) effective measures to be taken to minimize the problems of small scale mining in Tanzania.
(i) Small scale miners should be given loan as capital to be invested in large scale mining

(ii). Small scale miners should be given education so that they acquire technology easily.

(iv).  Condition of small scale miner should be improved.

(v).   Small scale miners should be encouraged to use modern mining technique.


11. (a). Urban growth is defined as the rate at which the population of an urban area increases. This result from urbanization which is the movement of people from rural areas to urban areas.

(b).  Urban growth is defined as the rate at which the population of an urban area increases. This result from urbanization which is the movement of people from rural areas to urban areas.

The following are the eight social and economic problems that result from urban growth.
SOCIAL PROBLEMS
(i).   Pressure on land


12.    Environment refers to all external conditions surrounding an organisms and which have influence over its behavior and activities.

The following are the eight (8) evidence  to prove that "The living environment in Tanzania is suffering at the expense of man's activities.