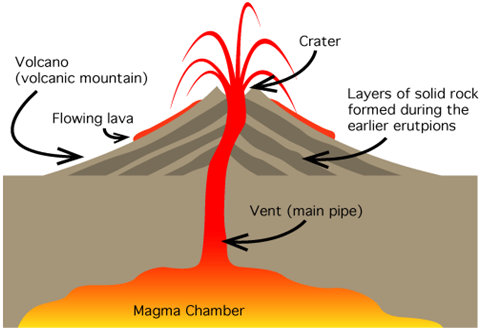 The Temperature decreases by 0.6°c for every 100m of altitude.

3. Barchan, also spelled Barkhan, is a crescent-shaped sand dune produced by the action of wind predominately from one direction.
- A barchan dune can form when a lot of sand is present in the desert. A steady wind from one direction is needed. The face of a barchan is very steep. As sand escapes over the top of the dune, it forms a trailing wall that is not steep, extending further backward and meeting the desert floor.

Seif dunes, a long, narrow sand dune or chain of dunes, generally oriented in a direction parallel to the prevailing wind or in a direction resulting from two or more winds blowing at acute angles to each other.
- The dune crest consists of a series of peaks and gaps, and the steep, or slip, face may change sides of the dune according to changes in wind direction. Most seif dunes occur in the open desert and rest on a coarse sand sheet.
- Seifs, common in Libya and southern Iran, may range up to 90 m (300 feet) in height, with a width of six times their height and a length of up to 100 km (60 miles). They grow in height and width by the action of crosswinds and in length by the action of winds parallel to their axis

4. The differences between the following:

a) Discrete and continuous data.

Discrete data is information that can be categorized into a classification. Discrete data is based on counts. Only a finite number of values is possible, and the values cannot be subdivided meaningfully. It is a data that can not be broken down into a smaller unit and add additional meaning. It is typically things counted in whole numbers.

Continuous data are numbers that can be expressed with infinite figures of possible values that fall between any two observed values. It can be described in fractions and decimals.

b) Single and grouped.

Single Data are statistics or values given for each individual item in a sample. Single data has not been organized into groups. It is just a list of numbers. Example Single data can list of lions in the forest e.g 05, 15, 20, 50...

Grouped Data is data that has been organized into classes. Grouped data has been classified and some data analysis has been done, which means this data is no longer raw.

5. Research can be defined as a careful and systematic investigation in some fields of knowledge or a systematic process of collecting information and interpreting it.

Field Research is an approach to field work in which problem solving forms element. It involves investigating and testing a problem of geographical nature.

I can review the collection of ideas presented by different scholars in different books, reports or journals. The collection of such Ideas is normally done focusing on the objective of the study in question. This stage guide me to do a research on what other researchers have not gone through in order to avoid repetition.

(iv) Establishment of a study design.

I will take time to think to design the people who will participate in the research study, how many and where they will be found in relation to the kind of information i want.
Also I will think how best research tools will collect my information.

This is a pilot study of the area before the actual data collection is done. I will test a small with equivalent features needed for the research, especially the tools of the research before the actual study is conducted. Thereafter, the data collection is conducted after ensuring that the tools are in the best condition to bring the expected outcome.

In order to collect accurate data in a field, I need to be carefully identify the appropriate method to use, the method are also regarded as research tools, research tools include observation, interview, questionnaire and group discussing method.

(vii) Analysis of the collected data

The data I will obtain makes no sense until it answer the questions asked in the problem. I will involves the conversion of the information into sensible ideas. This stage involves some mathematics ,description, organization and interpretation.

After analyzing the data I will identify the kind of data I needs to solve the problem. Data are presented either in tables or graphs of different Kind like bar graphs, line graphs, pie charts. To present data in these forms simplifies presentation of massive information and simplifies its interpretation.

After data presentation, I will be in position to answer questions asked in each step during data analysis. The analyzed data should be prove true or false for the hypothesis.

This is the last step of a research. On this stage I will publicize the finding by writing report.
The report is important for the research due to the following reasons.

(b) It fully presents the outcome of data of the research.

(c) It provides the data around the problem.

6. (a) The three types of topographical surveying are

(b) Chain surveying is a method of Surveying in which no angles are measured but only linear measurement is taken in the field by using a chain or tape measure.

The following are the importance of Chain Surveying

(i) It is suitable for small areas of fairly open ground.

(ii) It is used to fill in details on a map whose large features have been surveyed by other methods.

(iii) It is used in mapping small areas of flat or near-flat ground and associated objects, for example paths, roads and railways.

(iv) It is used in adding detail to existing plans or large maps.

(v) It is the only method in surveying used for measuring distances. Other used to measure angle and heights.

(b) To measure the distance of the railway line using a sheet of paper.

By using a piece of paper the map distance of railway is 30.2 cm.

Therefore distance of the railway is 15.1 km

Square both side 1cm=1/2km to get relationship between cm and km in square unit.

To find the area of one square on the map, take a rule and measure the width multiply by itself.
Area of square = wxw
W= 2 so
A= 2x2

Area of one square on a map = 4cm square

(iv) Security due to the presence of army camp

(v) Source of power such as power station

(vi) Means of transport such as roads, pipe lines and railways


(e) The following are the socio-economic activities carried out in the area.

(i). Transport due to the availability of roads, railways and pipeline

(ii). Pastoralism due to the presence of scrubs for pastures

(iii). Agriculture due to the availability of scattered cultivation

(iv). Fishing due to presence of lake

(v). Trade due to presence of market and means of transport

(vi). Lumbering due to the presence of woodlands.

(i). Religious activities due to the presence of churches

(ii). Education activities due to the presence of schools.

(iii). Transport and communication due to the presence of roads, railways, pipeline and telephone lines.

8. Study the photograph provided carefully, then answer the questions that follow: 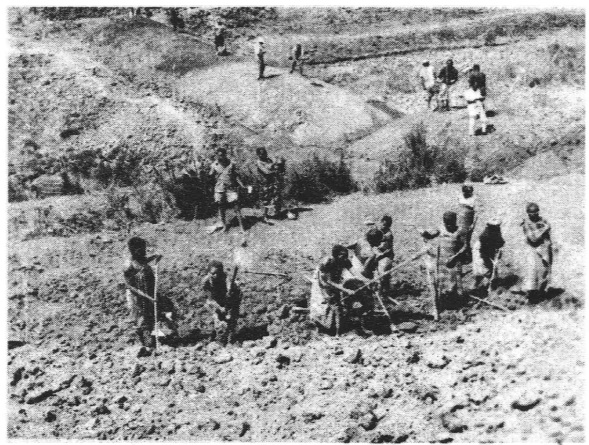 a) Name the type of photograph
Ground Photograph due to the following reasons:
-  It shows the side or front view of the image
- The foreground objects look larger than the middle and background objects

d) State the main activities of the area
- Agriculture because the people are observed cultivating at the foreground of the                  photograph
- Fishing due to the presence of river at the middle of the photographed area.


9. Pastoralism is an economic activity where people derive their livelihood from grazing and managing livestock on natural grassland. It is a type of farming where people are fully or partly involved in animal rearing on various scale and for varying purpose.

Nomadic pastoralism refers to a traditional economy in which large number of animals are kept by nomadic communities and they move from one place to another place in search of pasture and water. Nomadic pastoralism is practiced in the driest parts of East Africa such as northern Kenya where samburu are still constantly moving around in search of pasture and water. The turkana, Boran, and the Masai in Kenya, the Him a and Karamajong in Uganda and the Masai, Sukuma in Tanzania were also pure nomadic pastoralists.

The following are the characteristics of nomadic pastoralism in East Africa

(i) Frequent livestock raids by neighboring communities or amongst themselves.

(ii) The animals are grazed communally

(iii) The animals are kept for subsistence,meat,milk and blood.Nomadic herders make use of natural pasture for grazing of their livestock.

(iv) Normally practiced in areas with low and unreliable rainfall.

(v) The movement of the pastoralists is determined by the availability of water and pasture and biting insects like tsetse fly.

(i) The government in East Africa encourage transhumance pastoralists to engage in commercial milk production because they occupy areas of high agriculture potential.

(iii). To provide education to the pastoralists About modern ways of keeping animals.

(iv). To encourage pastoralists to utilize their grazing land much more efficiently by reducing numbers of cattle.


10. Ship industry refer to the construction of ships and other floating vessels. It normally takes place in a specialized facility known as a shipyard.

Japan is an island nation in the Pacific Ocean with dense cities, imperial palaces, mountainous national parks and thousands of shrines and temples. Japan is the highest producer and manufacture of ships in the world.

(i). Capital availability that was inverted in the ship industries

(iii) Development of iron and steel in Japan.

(iv). Availability of market within and outside the nation.


11. (a) Ecosystem means is the natural system in which plant (Flora) and animal (fauna) interact with each other and the non living environment.

(b). Biodiversity means that a variety of species of living organisms both plants and animals (flora and fauna).

Loss of biodiversity refers to all processed that lead to loss of variety of species of organisms and plants of Earth.

The following are the major causes of the loss of biodiversity.

(i). Floods which kill most of the organisms.


12. (a). Population refers to the number of organism or objects occupying a given area.

Human population refers to the total number of people inhabiting or occupying a specific unit or geographical area at a particular time.

The following are the characteristics of Human population


(b). Population refers to the number of organism or objects occupying a given area.

The following are the main factors that influence population distribution