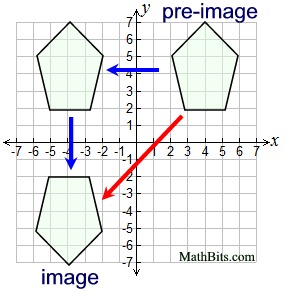 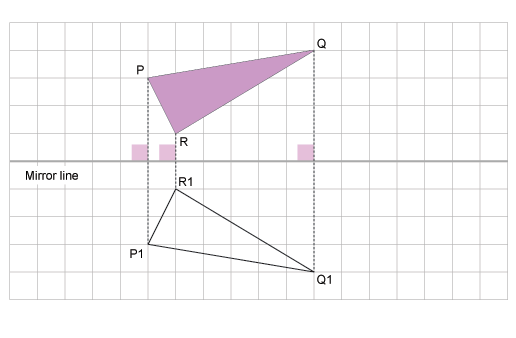 Characteristics of Reflection
In the diagram, APQR is mapped onto ΔP'Q'R' under a reflection in the line AB. If the paper is folded along the line AB, ΔPQR will fall in exactly onto ΔPQR. The line AB is the mirror-line. which is the perpendicular bisector of PP', QQ' and ΔPQR and ΔP'Q'R are congruent.

The reflection of the point B(c,d) in the line y = -x is B' (-d, -c)
Tutorial on reflection through y=x
Tutorial Created by Willbald Mvungi-Ilboru Secondary
Exercise 1
Rotations
Characteristics of a Rotation on a Plane
Describe characteristics of a rotation on a plane
Rotation is a transformation which rotates all points on a plane about a fixed point known as the centre of rotation through a given angle in a clockwise or anticlockwise direction
In order to describe a rotation, we give:
Example 1
Copy the figure T and rotate 180° about the origin.

A rotation is a transformation that turns a figure about a fixed point called a Centre of Rotation.You can rotate the figure as much as 360 degrees. The transformation of Rotation is usually denoted by R. The symbol R› means that an object is rotated through an angle 9. In the xy plane, when is measured in the clockwise direction it is negative and when it is measured in the anticlockwise direction it is positive.

Translation
Properties of Translations
State properties of translations
Translation is a transformation which moves all points, on a plane through the same direction
In the diagram, ΔABC slidesΔA'B'C' (A' is read as A prime) is the direction AA'. Note that AA' are parallel and of equal length. We say that ABC is mapped onto A'B'C' by a translation. 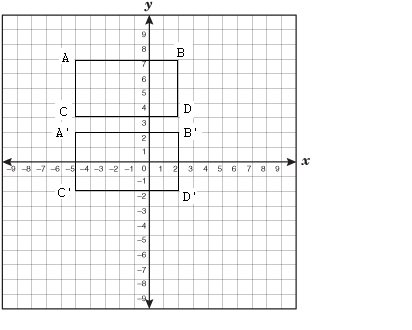 If you cast a shadow of an object onto a plane surface, say a wall, by using a light source, the shadow becomes bigger as the object moves closer to the light source.
In figure 7.40, AB casts a shadow CD. When AB moves to a new position and is renamed QP (same size with AB) the shadow of QP becomes SR and it is greater than CD. 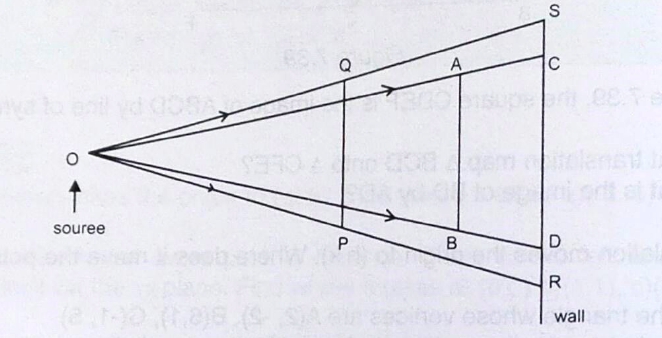 Enlargement
A Scale of Enlargement
Develop a scale of enlargement
Tutorial on Enlargement
Tutorial Created by Willbald Mvungi-Ilboru Secondary
Enlargement is a transformation in which a figure is made larger (magnified) or made smaller (diminished). A photograph may be enlarged or diminished to suit a Certain purpose. Figures can be drawn to scale where actual figures are diminished or enlarged. Enlarged shapes are geometrically similar and have corresponding angles equal. The number that magnifies or diminishes a figure is called the enlargement factor and is usually denoted by k. If k is less than 1 the figure is diminished and if it is greater that 1 the figure is enlarged k times.
In the case of closed figures, if the lengths enlarged by a factor of k then the area is enlarged by k2.
Scale
Similarity can be used in enlarging of diminishing geometrical figures. For example in maps, a large area of land is represented by a small area on paper by a scale. Scale is a ratio between the measurement of a drawing to the actual measurement. It is normally stated in the form of 1 : n, for example, if a scale of a map is 1.20000, then 1 unit on the map represents 20000 units on the ground.

In the figure, triangle ABC is a scale measurement of triangle PQR, where the scale is 1:2.
Scale is measurement of drawing: Actual Measurement, that is,
Scale = Measurement of drawing/Actual measurement
Exercise 3
Find the length of a drawing that represents:
A building2 50 metres high is representedb y a line segment of length 5 cm. Finc the scale of the drawing.
A triangular plot of land has sides 152 metres and 208 metres meeting at an angle of 500. Find by scale drawing the distance from the middle point of the longest side to the opposite corner
Enlargement of a Given Figures
Construct enlargement of a given figures
Consider two similar rectangles shown in the figure below with a scale factor k.

If AB = a and AD = a, then PO = ak and PS bk
Area of ABCD = a× a = ab
Area of PORS = ak x bk = abk2
Area of PORS/Area of ABCD = abk2/ab = k2
Therefore, if two polygons have a scale factor k then the ratio of their areas is k2. This is also called the scale factor for the area.
Figures to Scale
Draw figures to scale
If we 'enlarge' a shape by a scale factor that is between -1 and 1, the image will besmallerthan the object
Example 2
Enlarge triangleABCwith a scale factor1/2, centred about the origin. 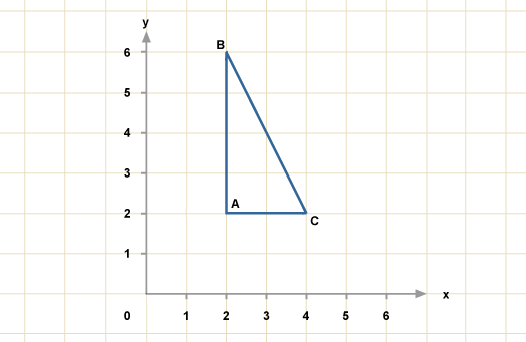 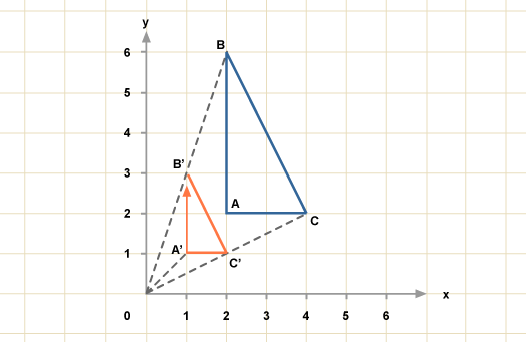 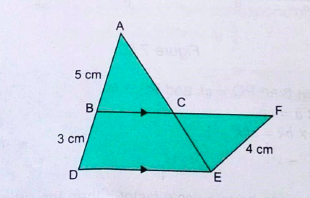 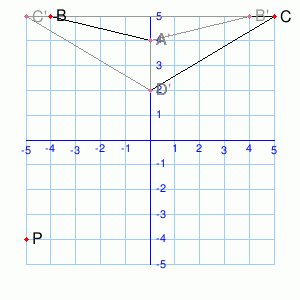 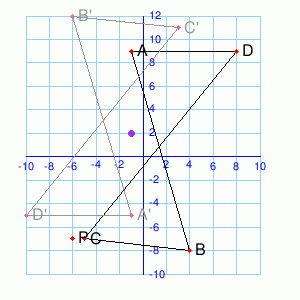 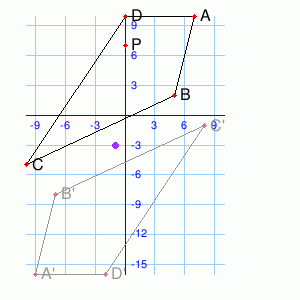