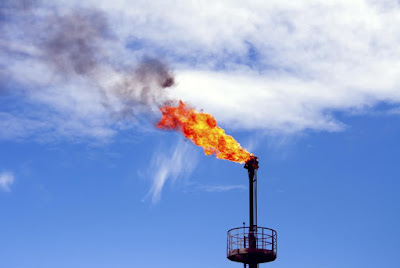 TOPIC 4: FUELS AND ENERGY
A fuel is a substance that can be combusted or burnt to release energy as a byproduct. The energy can be in the form of heat, light, electricity, sound etc. This energy can be harnessed to power machines or used for other purposes such as heating or lighting. Combustion is the burning of fuel with energy released as a byproduct. Fuel is a very important substance for the existence of a modern man. Examples of fuels include petroleum products (petrol, diesel, fuel oil, kerosene, spirits, etc), natural gas, coal, wood, charcoal, producer gas, water gas, etc.

As the carbon dioxide formed rises up through the red-hot coke, it is reduced to carbon monoxide:

Since more heat (406 kJ) is produced in the lower part than is absorbed in the upper part of the furnace (163 kJ), some excess heat is obtained in the long run. This heat keeps the coke hot. The nitrogen gas in the air is not affected at all during the process. Hence, the overall reaction equation may be represented as follows:

As a fuel, producer gas burns to give out carbon dioxide.

Because a good deal of producer gas contains nitrogen, a gas that does not support combustion, it has a lower calorific value compared to water gas. See table 4.2 for comparison.
Water gas
Water gas is produced by passing steam over white-hot coke at 1000°C. The gas is a mixture of hydrogen and carbon monoxide. The reaction is endothermic, causing the coke to cool.

Water gas burns as a fuel to give carbon dioxide and steam.

However, carbon monoxide is a very poisonous gas. The gas made from petroleum or coal contains some carbon monoxide, which makes it poisonous. Natural gas is safer and efficient, as it contains no carbon monoxide.
Characteristics of a good fuel
A good fuel burns easily to produce a large amount of energy. Fuels differ greatly in quality. There are certain characteristics, which make a good fuel. After all, there is no fuel among the different fuels known that posses all the virtues that a good fuel should have. Generally, a good fuel has the following
characteristics:
Calorific values of fuels
The heating value or calorific value of a substance, usually a fuel or food, is the amount of heat released during the combustion of a specific amount of it. The calorific value is a characteristic of each substance. It is measured in units of energy per unit of substance, usually mass, such as Kcal/Kg, J/g, KJ/Kg, KJ/Mol, MJ/m3, etc. Heating value is commonly determined by use of an instrument called bomb calorimeter.
By custom, the basic calorific value for solid and liquid fuels is the gross calorific value at constant volume, and for gaseous fuels, it is the gross calorific value at constant pressure.
Calorific values of solid, liquid and gaseous fuels
Measuring the heat given out by fuels
We burn fuels to provide us with heat energy. The more heat a fuel gives out the better. The amount of heat given out when one mole of fuel burns is called heat of combustion. This is often written as

This value can be measured in the laboratory indirectly by burning the fuel to heat water. Simple apparatus is shown in figure bellow. The basic idea is: Heat gained by the
Heat gained by the water = heat given out by the fuel.
Method
These are the steps:

Measuring the energy value of a fuel
Calculations
It takes 4.2J of energy to raise the temperature of 1g of water by 1ºC. This constant value is called specific heat capacity of water, usually represented as 4.2Jg-1C-1 (4.2 joules per gram per centigrade). So, you can calculate the energy given out when the fuel burns by using this equation:
Energy given out = 4.2g-1C-1 mass of water (g) its rise in temperature (ºC).
Then since you know what mass of fuel you burned you can work out the energy that would be given out by burning one mole of it.
Example 1
The experiment gave these results for ethanol and butane. Make sure you understand the calculations:
Experimental results for heat determination
Example 2
Determination of energy (calorific) value of ethanol
The energy/heating/calorific value of a fuel refers to the amount of heat given out when a specific amount of fuel is burned.
Experiment
Aim: To find out the energy value of ethanol.
Materials: water, beaker, thermometer, weighing balance, spirit lamp and ethanol.
Procedure:
Record the following:
The amount of heat (q) released by ethanol is given by:

The less oxygen there is, the more carbon monoxide and carbon will form.
Renewable Energy Biogas
Renewable energy sources include biomass, geothermal energy, hydroelectric power, solar energy, wind energy, and chemical energy from wood and charcoal. These are called renewable energy sources because they are replenished within a short time. Day after day, the sun shines, wind blows, river flows and trees are planted. We use renewable energy sources mainly to generate electricity.
In Tanzania most of the energy comes from non-renewable sources. Coal, petroleum, natural gas, propane and uranium are examples of non-renewable energy sources. These fuels are used to generate electricity, heat our homes, move our cars and manufacture many kinds of products. These resources are called non-renewable because they cannot be replenished within a short time. They run out eventually. Once, for example, coal or petroleum is depleted, it may take millions of years to be replaced. So, these are non-renewable energy sources.
BIOGAS
Biogas is a gaseous fuel produced by the decomposition of organic matter (biomass). Under anaerobic conditions, bacteria feed on waste organic products, such as animal manure and straw, and make them decay. The product formed from this decay is called biogas, which consists mainly of methane, though other gases such as carbon dioxide, ammonia, etc, may also be produced in very small quantities. The biogas produced can be used as a fuel for cooking, heating, etc.
Raw materials for biogas production may be obtained from a variety of sources, which include livestock and poultry wastes, crop residues, food processing and paper wastes, and materials such as aquatic weeds, water hyacinth, filamentous algae, and seaweeds.

The Working Mechanism of Biogas Plant
Explain the working mechanism of biogas plant
The organic waste products are fed in a biogas plant. Prior to feeding the material into the plant, the raw material (domestic poultry wastes and manure) to water ratio should be adjusted to 1:1 i.e. 100 kg of excreta to 100 kg of water. Then adequate population of both the acid-forming and methanogenic bacteria are added.
The bacteria anaerobically feed on the liquid slurry in the digester. The major product of this microbial decomposition is biogas, which largely contain methane gas. The gas so produced is collected in the gas holder and then taped off. The gas is used as a fuel for cooking, heating and other general purposes.
The biological and chemical conditions necessary for biogas production
Domestic sewage and animal and poultry wastes are examples of the nitrogen-rich materials that provide nutrients for the growth and multiplication of the anaerobic organisms. On the other hand, nitrogen-poor materials like green grass, maize stovers, etc are rich in carbohydrates that are essential for gas production. However, excess availability of nitrogen leads to the formation of ammonia gas, the concentration of which inhibits further microbial growth. This can be corrected by dilution or adding just enough of the nitrogen-rich materials at the beginning.
In practice it is important to maintain, by weight, a C:N close to 30:1 for achieving an optimum rate of digestion. The C:N can be manipulated by combining materials low in carbon with those that are high in nitrogen, and vice versa.
A pH range for substantial anaerobic digestion is 6.0 – 8.0. Efficient digestion occurs at a pH near to neutral (pH 7.0). Low pH may be corrected by dilution or by addition of lime.
To ensure maximum digestion, stirring of the fermentation material is necessary. Agitation (stirring) can be done either mechanically with a plunger or by means of rotational spraying of fresh organic wastes. Agitation ensures exposure of new surfaces to bacterial action. It also promotes uniform dispersion of the organic materials throughout the fermentation liquor, thereby accelerating digestion.
A Model of Biogas Plant
Construct a model of biogas plant
The biogas plant consists of two components: the digester (or fermentation tank) and a gas holder. The digester is a cube-shaped or cylindrical waterproof container with an inlet into which the fermentable mixture is introduced in the form of liquid slurry. The gas holder is normally an airproof steel container that floats on the fermentation mix. By floating like a ball on the fermentation mix, the gas holder cuts off air to the digester (anaerobiosis) and collects the gas generated. As a safety measure, it is common to bury the digester in the ground or to use a green house covering. 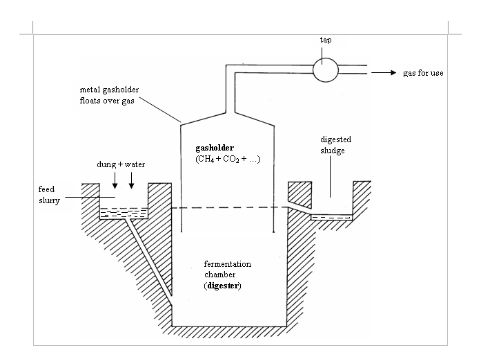