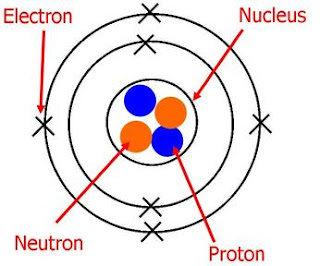 TOPIC 5: ATOMIC STRUCTURE
The Atom
We learned early that matter is made up of small, indivisible particles. Everything around us is made of extremely small particles. These particles are either molecules or atoms. An atom is the smallest indivisible particle of an element that takes part in a chemical change. Atoms are the building blocks of matter. All solids, liquids and gases are made of atoms fitted in different ways.
The present day chemistry is built on the foundations of the Atomic Theory. The idea that elements are made up of atoms is called the Atomic Theory. An English chemist, John Dalton was the first to put forward the Atomic Theory, which for most of the 19th century stated that atoms were hard, extremely small, indivisible and spherical particles like minute lead shots

Dalton Contribution to Atomic Structure
Explain Dalton contribution to atomic structure
The Greek philosopher Democritus (460-370 BC) believed that matter was indestructible and that it is made up of tiny particles called atoms. Our modern understanding is based on the Atomic Theory which was put forward by John Dalton in 1808. His theory re-introduced the ideas of Democritus and other Greek philosophers who suggested that all matter was infinitely divided into very small particles called atoms. These ideas were not widely accepted at that time. They were only revived when Dalton developed them further and experimental science was able to back them up with practical observations.
The Atomic Theory goes back to ancient Greeks, yet we always talk today about Dalton's Atomic Theory. There is a good reason for this. The reason is that, while Greeks put forward the idea that atoms exist they did nothing more. They left the idea vague and untested. Dalton changed this vague imaging into a set of concrete suggestions about atoms which could be tested by experiment. This change from vagueness to precision and experimental test justifies his claim to the theory.
Dalton’s Atomic Theory contains the following main ideas:
The Modern Concept of Dalton’s Atomic Structure
Explain the modern concept of Dalton’s atomic structure
From the theory, it is observed that each atom has its own mass and that chemical combination takes place between atoms and not fractions of atoms.
Discoveries made in the 20th century, however, showed that certain parts of the theory must be modified. However, Dalton‟s Theory was one of the great leaps of understanding of chemistry. It meant that we could explain many natural processes.
Dalton's Atomic Theory was the first step towards the formation of Modern Atomic Theory. The Dalton's Theory has been subjected to numerous experimentations that have led to some modifications to the theory. However, some ideas in his theory still hold strongly to date. Some modifications to the theory include the following:
Sub-atomic Particles
Sub-atomic Particles in an Atom
Identify sub-atomic particles in an atom
Dalton thought that atoms were solid, indivisible particles. But, as a result of work done mainly by Lord Rutherford, the idea has been greatly changed in recent years. According to Rutherford, the atom consists of 3 kinds of particles - protons, neutrons and electrons. These are called sub-atomic particles.
The centre of the atom is called nucleus. The nucleus contains a cluster of two sorts of particles, protons and neutrons. The nucleus is very small, occupying only about 1% of the volume of an atom. The rest of the atom is mostly empty space, with electrons spread out in it. 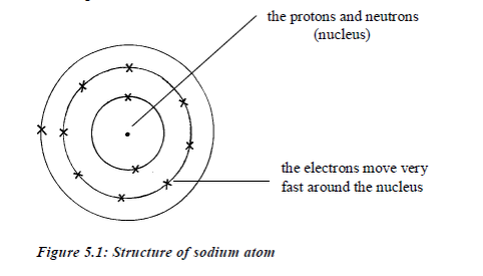 A single atom is electrically neutral (it has no electrical charge).This means that in any atom there must be equal numbers of protons and electrons. In this way, the total positive charge on the protons is balanced by the total negative charge on the electrons orbiting the nucleus. So, the charges must cancel.
Electronic Arrangements
Electronic arrangement refers to the manner in which electrons are arranged in an atom. An atom contains a central nucleus containing protons and neutrons, and a cluster of electrons revolving in orbits around the nucleus. These electrons are grouped in shells.
A Maximum Number of Electrons in the Shells
Determine a maximum number of electrons in the shells
Bohr (1913) put forward a theory of electron positioning whichis still generally accepted and used until now for chemicalpurposes. Bohr's Theory on the arrangement of electrons in anatom can be summarized as follows:
Electronic arrangement of some typical atoms is shown in figure 5.2. 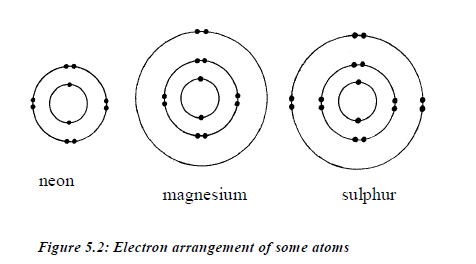 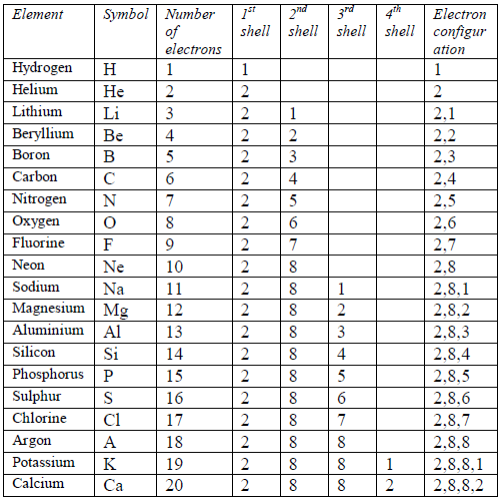 After the first 20 elements, the organization of the electrons becomes increasingly complicated. The third shell (n = 3) can be occupied by a maximum number of 18 electrons
At this stage, you will not be asked to work out electron arrangements beyond element 20 (calcium), but you should be able to understand the electronic structures involving more electrons (for example bromine with the arrangement 2:8:18:7).
Energy Shell Diagrams
Draw energy shell diagrams
Energy Shell Diagram 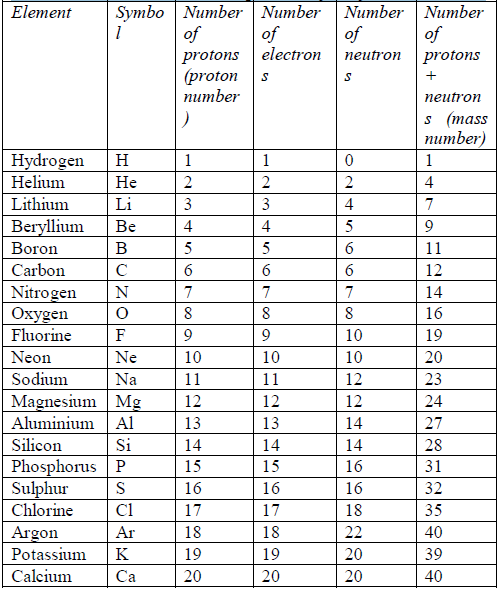 The Concept of Isotope
Explain the concept of isotope
Atoms of the same element may have different numbers of neutrons. In a normal situation, atoms of the same element will have the same number of neutrons. However, many cases occur in which two atoms of the same element contain the same number of protons but different numbers of neutrons. Having equal number of protons, these atoms must also have equal numbers of electrons. However, the differing numbers of neutrons cause the atoms to have different mass numbers. An element showing such properties is said to show isotopy and the varieties of the atom are called isotopes of the element.
Therefore, isotopy can be defined as the tendency of atoms of one element to posses the same atomic number but different mass numbers (atomic masses). Isotopes can be defined as atoms of the same element with the same number of protons but different numbers of neutrons, or as „atoms of the same element with the same atomic number but different atomic masses‟.
The isotopes of an element have the same chemical properties because they contain the same number of electrons. It is the number of electrons in an atom that decides the way in which it forms bonds and reacts with other atoms. However, some physical properties of the isotopes are different. The masses of the atoms differ, and therefore other properties, such as density and rate of diffusion, also vary.
Many isotopes (like tritium) are unstable. The extra neutrons in their nuclei cause them to be unstable so that nuclei break spontaneously (that is, without any extra energy being supplied), emitting certain types of radiation. They are known as radioisotopes.
Notation for isotopes
In order to distinguish between different isotopes of the same element in writing symbols and formulae, a simple system is adopted. The isotope of an element, say X will have the symbol X, AZ , where A is the mass number of the isotope and Z is the atomic number of any atom of X. Thus, for all isotopes of one element, Z is constant, and A varies because there are different numbers of neutrons in the different isotopes of the element. For example, the three isotopes of carbon are expressed as 12C6, 13C6, and 14C6. Chlorine has two isotopes: 35Cl17 and 37Cl17 . Since A represents the total number of neutrons and protons in the nucleus of an atom (mass number/atomic mass), and because Z is the number of protons (atomic number), then the number of neutrons in the nucleus of a given isotope is given by:Number of neutrons in the nucleus = A – Z
Relative atomic masses
As we have seen, most elements exist naturally as isotopes. Therefore, the value we use for the atomic mass of an element is an average mass. This takes into account the proportions (abundance) of all the naturally occurring isotopes. If a particular isotope is present in high proportion, it will make a large contribution to the average.
Example
A sample of chlorine gas contains 75% of the isotope 35Cl17 and 25% of the other isotope 37Cl17 . What is the relative atomic mass of chlorine?
Solution
To work out this problem, simply multiply the mass number ofeach isotope with the abundance and sum up the products thus: