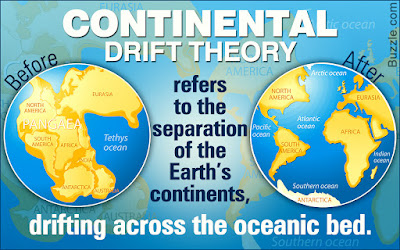 History of the Theory

Continental drift was first conceived by scholars and philosophers named Francis Bacon, George Buffon, and Alexander von Humboldt. As maps grew more accurate the landmasses began appeared as puzzle pieces. The continents once had fit together but had drifted apart after millions of years.

The continents now far apart showed similar sediment, rock formation, and vegetation supporting the theory that they were one landmass in the past. These men helped establish the idea of continental drift, but Alfred Wegener spent much time exploring and researching to prove this theory.

Alfred Wegener, in full Alfred Lothar Wegener, (1880 - 1930), German meteorologist and geophysicist who formulated the first complete statement of the continental drift hypothesis. He taught meteorology at Marburg and Hamburg and was a professor of meteorology and geophysics at the University of Graz from 1924 to 1930.

The continental drift theory was advanced by Alfred Lothar Wegener in 1912
According to his theory, about 280 million years, the present day continents were united in a single block called Pangaea and surrounded by ocean called Panthalassa. He believed that Pangaea was located near the South pole. Later Pangaea split into two (2) Super continents i.e Gondwanaland (south Pole) and Laurasia (along the equator in the northern hemisphere).

Gondwanaland split to give present day Africa, South America, Australia and Indian sub-continent, Antarctica and other islands in the southern Hemisphere.

Drift:
Since that time the continents have been drifting apart to occupy their present positions. And the drifting is a very slow one about 2cm per year. The drifting is still in progress.

2. Geological evidence
Similar rock types in the coastal margin of the continents for example if you take the rocks of west Africa coastal margin and those of Eastern coast Brazil coastal margin the rocks will be the same (similar). These rocks where one before the split. (Similar type, age, structure, formation)

3. Biological evidence :
The study of earlier life in sedimentary rocks. That reveals life similar fossils of different time where found in different places. Similar animals, plants and these fossils are found in all continents hence prove that they all come from one landmass

4.  Geomorphologic evidence:
Structure of mountains (fold mountains) e.g. The Alps and Atlas have similar features and where also formed under similar conditions, type of  rocks the mountain  case, structure, alignment  and  were formed when Africa moved north wards ending up colliding with  the  European continent. This gives evidence that the drifting movement took place.

5.  Pale-climatic   evidence:
The discovery of ancient is in the Congo basin where the climate is warm is used as evidence that the Africa continent drifted from parts which were cold to the current warm parts. For example, Africa has been shifting north wards from the south likewise coal deposit found beneath Antarctic ice caps and Greenland show that they were deposit   when the continents had not drifted led to those places when the climate coast warm. This is because the organisms that led to the formation of those deposits cannot east in areas where there is very low temp.

6.  Paleo magnetism (palae-magnetic evidence).
This is the most conclusive proof of the continental drift which was done through pale magnetic dating. When the rocks cooled they were magnetized in the same direction (magnetic North) but pale magnetic dating shows that rocks older than 200,000 years ago from different parts of the earth, have shifted their relative positions magnetic fields show new paths representing relative migration of the earth’s materials 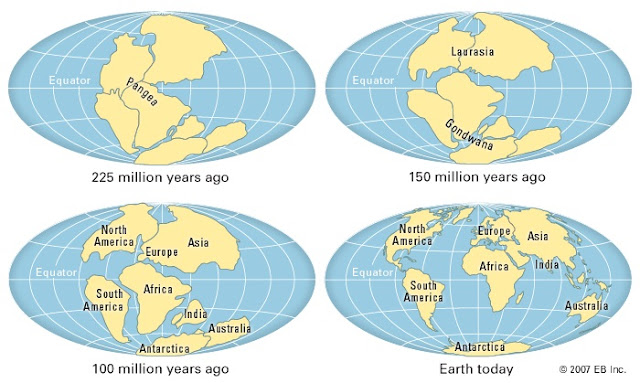 1.Alfred Wegener meddled in the field of geology
- This was because Alfred Wegener was a meteorologist not a geologist, that means he had no enough knowledge to explain about geology as far as he was dealing with meteorology.

2. Misfit of some continents.
- Possibly not all continents fits exactly to each other if they could be brought together. but Wegener did not account on that aspect. 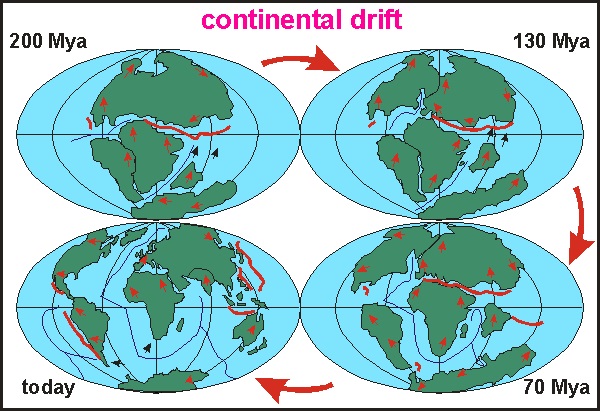 - The theory led to the formation of continents, landforms like the rift valley, seas or ocean,mountains like Alps and Atlas.

- Occurrence of earthquakes and volcanic eruptions as a result of crustal deformation.

-Climatic changes, e.g some continents moved to the polar region and assumed very low temperatures such as Antarctica and Greenland.

-Also folding has led to the elevation of the surface leading to very low temperature on the Summit, for example Mount Kilimanjaro peak and Mount Everest summit; it is very cold 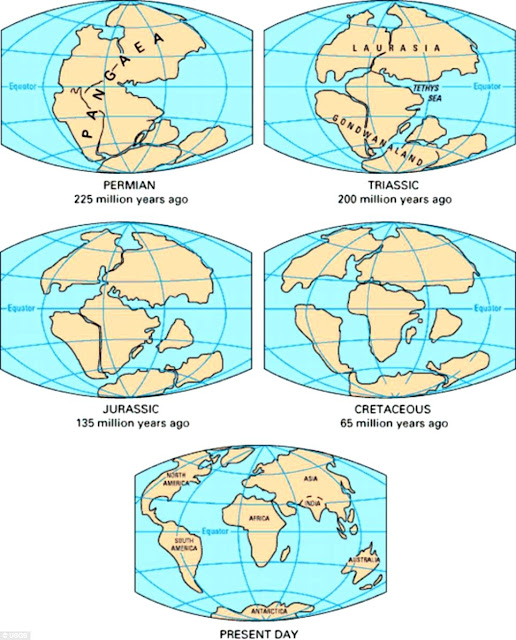