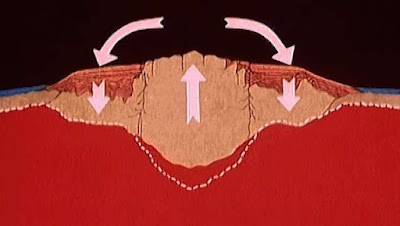 Sir George Biddell Airy (1801-1892, Greenwich, London), English mathematician who was astronomer royal from 1835 to 1881. Airy graduated from Trinity College, Cambridge, in 1823. He became Lucasian professor of mathematics at Cambridge in 1826 and Plumian professor of astronomy and director of the Cambridge observatory in 1828. In 1835 he was appointed the seventh astronomer royal, i.e., director of the Royal Greenwich Observatory, a post he would hold for more than 45 years.

The word isostacy is a Greek word means “equal standing”

The theory postulates that the continents and their major features are maintained in a sort of equilibrium; whereby the large portions of the Earth’s crust are floating on a denser underlying layer called mantle. 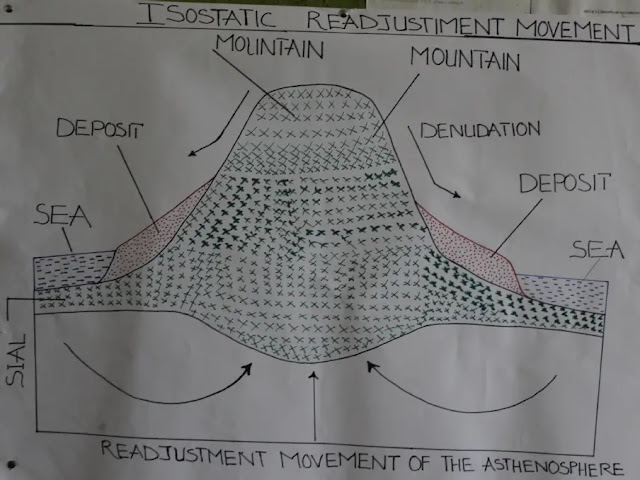 - Thus the areas of less dense rock rise topographically as continents and mountains, their movement is compensated for by a similar downwards penetration of this less dense rock into sima

- Hence the lithosphere has highland and lowland due to the variation in density of the materials and gravity, so lowland have denser materials than highland.

- Regardless the density variation, the Earth maintain its balance, any disturbance on the earth’s crust cause movement of the molten materials (Asthenosphere) in a mantle to different direction for the sake of bringing back equilibrium 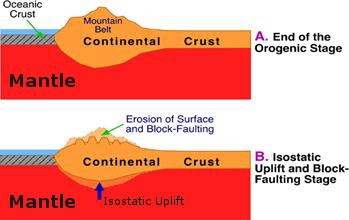 The concept of Sir George Airy (hypothesis proposed in 1855)

- According to Airy, the inner parts of the mountains are not hollow; rather the excess weight is compensated by the lighter materials below.

- According to him the crust of relatively lighter material is floating in the substratum of dense material.

- Therefore, the continents which are made of lighter sial are floating over the sub-stratum which is built of the denser sima.

- Thus, Himalaya is also floating in the denser glassy magma.

- He suggested that the lighter sial of the Himalaya is floating over the denser material of sima lying underneath.

- Not only this, but the Himalaya is floating in the denser magma with their maximum portion sunk in magma in the same way as aboat floats in water with its maximum parts sunk in the water.

The movement are of two types;
- Vertical and Lateral movement

- Vertical movement
involves upward and downward, hence it cause either uplift or sagging of the  earth’s  crust respectively.

- Highland are center of denudation while lowland is the center of aggregation.

- Thus when the highlands are worn down there occurs land uplift as a result of upward movement of mantle materials caused by reduction in weight on the earth’s surface.

- As well as when ice melt leads to crust uplift because of reduction in weight while Forming deposition  on lowland part of the continents.

- The depression of the crust in the northern part of America and Europe was due to the weight of ice sheets of vast thickness during the ice age.

- The slowly rising of crust due to ice sheet melting, in the former beaches that occur around the coast of Scandinavia. Now lie from 8m to 30m above the present day beaches.

- Submergence of forests on the shores of Britain.

The continental shelf around Antarctica is covered by water to a depth of about 750m compared with 180m around the continents.

- Presence of rias and estuaries between coastal lands of Gambia and Sierra-Leone.

A ria is a coastal inlet formed by the partial submergence of an unglaciated river valley. It is a drowned river valley that remains open to the sea. Typically, rias  have a dendritic, treelike outline although they can be straight and without significant branches.

Estuary
An estuary is a partially enclosed coastal body of brackish water with one or more rivers or streams flowing into it, and with a free connection to the open sea.

- Formation of faulting leading to the formation of Grabens, Horsts and tilted block.

- Creation of folding leading to the formation of various folds as well as fold mountain.

- Formation of Earthquakes with the associated effects like faulting subsidence and uplift.

- The theory failed to explain the formation of depositional features which are seen to appear above the sea water level.

- The theory has more generalized that is it has over looked. It has not pointed out which mountains have roots

- Is it true that, all mountains maintain their heights in the same way as postulated by theory ? Consider the case of residual mountains which have been formed by denudation.

- It provide an understanding on the dynamic state of the earth’s crust, that the Earth’s crust is not static it is dynamic as it tends to balance itself after some disturbance and the influence of gravitational force.

- It paves a way to understand theories such as plate tectonic and continental drift, through the idea that crust floats like ice berg on the ocean.

- It helps understanding of how various landforms were formed e.g fold mountain and garbens.

- It enhance human being to take precaution depending the nature of the phenomena at his localities. E.g volcano eruption.

- It gives basis for predicting the future of the crustal state at any particular place on the earth’s surface.