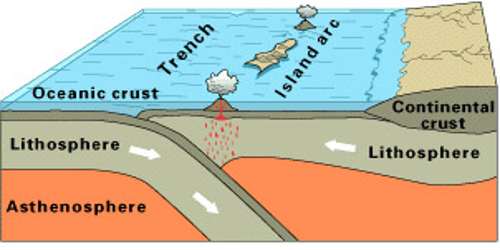 The concept of plate tectonics was formulated in the 1960's. Plate tectonics is the modern version of continental drift, a theory first proposed by scientist Alfred Wegener in 1912. Wegener didn't have an explanation for how continents could move around the planet, but researchers do now. Plate tectonics is the theory of geology, said Nicholas van der Elst, a seismologist at Columbia University in New York.

The theory also takes the combination of theory of theory of isostacy, continental drift and ocean floor spreading.

The Meaning of Plate Tectonics

Plate in geologic terms means a large slab of solid rock. “Tectonics” is a part of the Greek root for “to build” and together the terms define how the Earth’s surface is built up of moving plates. The theory of plate tectonics itself says that the Earth’s lithosphere is made up individual plates that are broken down into over a dozen large and small pieces of solid rock. 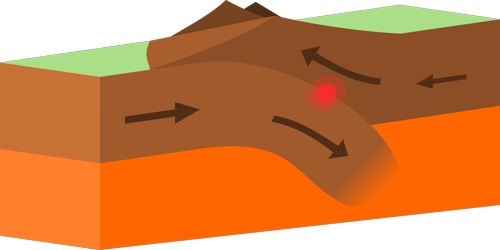 According to the theory, Earth has a rigid outer layer (shell), known as the lithosphere which is made up of several rigid piece called tectonic plates. The lithosphere (crust and upper mantle) is broken up into seven very large continental- and ocean-sized plates, six or seven medium-sized regional plates, and several small ones.

There are seven major tectonic plates (North America, South America, Eurasia, Africa, Indo-Australian, Pacific and Antarctica) as well as many smaller, microplates such as the Juan de Fuca plate near the United States’ state of Washington (map of plates).

These plates move relative to each other, typically at rates of 5 to 10 cm (2 to 4 inches) per year, and interact along their boundaries, where they converge, diverge, or slip past one another.

The crust is made up of segment called plates, which are of various sizes, Large and small plates. pacific, N. American, Nazca, S. American, Africa, Indian, Antarctica plates.

Plate boundaries can be categorized in three fundamental types:

(a) Divergent boundaries - This occurs when plates separate and move in opposite directions, allowing new lithosphere to form from upwelling magma. This either occurs at mid-ocean ridges (the so-called seafloor spreading) or at rifted continental margins.

- The space created can also fill with new crustal material sourced from molten magma that forms below. Divergent boundaries can form within continents but will eventually open up and become ocean basins.

ii) Under the sea
The most active divergent plate boundaries are between oceanic plates and are often called mid-oceanic ridges. 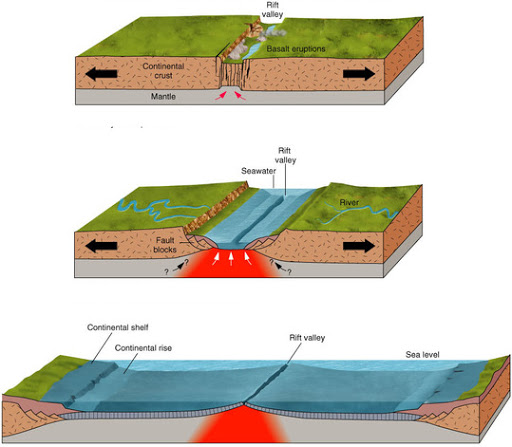 (b) Convergent boundaries - This occurs where the plates move towards each other. One plate either sinks beneath the other along a subduction zone or plates collide because neither can be subducted.

- Subduction zones occur when one or both of the tectonic plates are composed of oceanic crust. The denser plate is subducted underneath the less dense plate. The plate being forced under is eventually melted and destroyed.

i) Where oceanic crust meets ocean crust
Island arcs and oceanic trenches occur when both of the plates are made of oceanic crust. Zones of active seafloor spreading can also occur behind the island arc, known as back-arc basins. These are often associated with submarine volcanoes.

ii) Where oceanic crust meets continental crust
The denser oceanic plate is subducted, often forming a mountain range on the continent. The Andes is an example of this type of collision. 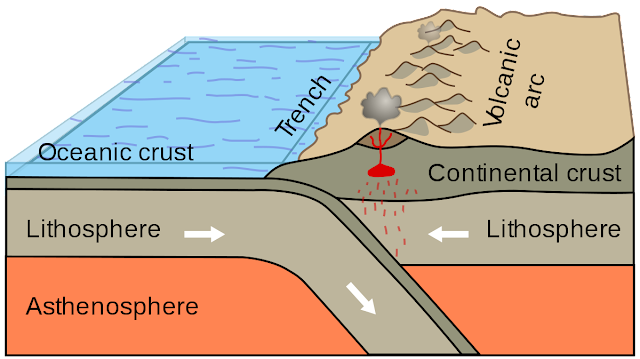 - Natural or human-made structures that cross a transform boundary are offset-split into pieces and carried in opposite directions. Rocks that line the boundary are pulverized as the plates grind along, creating a linear fault valley or undersea canyon. Earthquakes are common along these faults. In contrast to convergent and divergent boundaries, crust is cracked and broken at transform margins, but is not created or destroyed.

Based on the three types of plate boundaries, a global network of approximately twelve major plates of irregular shape and size cover the Earth's crust. Where one type of plate boundary is terminated it is transformed into a boundary of a different type.

i) Convectional current
During mantle convection some materials rise due to the influence of radioactive heat generation and later moves laterally below the lithosphere. The lateral movements drag the lithosphere leading to the plate tectonic movements. On cooling the materials sink down to the lower level of the mantle where they melt again due to the constant motion of the plates

ii) Upwelling of magma in the lines of weakness for example in the mid-oceanic ridges where by the magma is pushed out of the surface through the weak lines of the crust, in order to form a new crust. This may result to the cause of movements

iii) Isostatic adjustment
May cause slight movement when trying to create balance.

iv) Cooling and heating of the crustal rocks
Expansion and contraction of rocks. The heat in the interior of the earth (mantle) causes rocks inside to expand and when the heat reduces, the rocks cool. This process causes the rocks to crack hence leads to the disturbance of the crust and causes movements.

Changes on the plate boundaries which are lines of weakness and on these boundaries, major landforms of the earth’s surface are going to be formed.

c) Neutral / Trans current boundary - There is neither uplift nor seduction. There is lateral displacement of the plates. N. America, San Francisco - San Andrea’s faults displacement of features of about 1000 km.

The plate tectonic areas are areas of instabilities which results to earth quake, volcanoes. 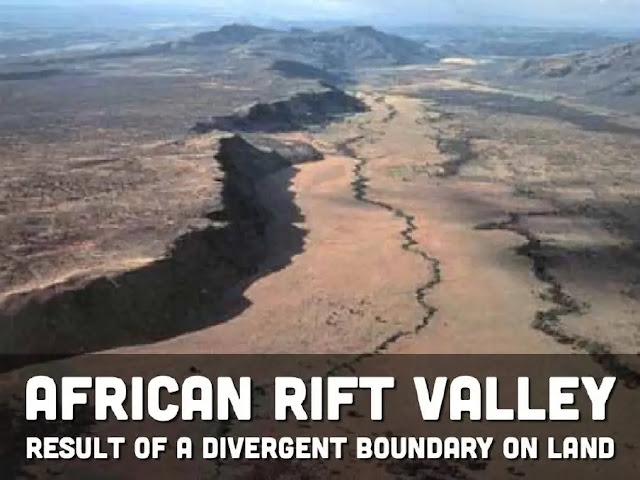 The theory of plate tectonic can help to explain almost all of the landforms on the surface of the earth.

i. Deep sea Trenches: A sea trench is a long deep valley along an ocean floor.they form along a convergent destructive term of depth.the Mariana in the western Pacific with a depth of more than 36000 ft.

ii) Mid Oceanic Ridge: It refer to a giant undersea mountain range made up mostly basalt.It may be more than 80000 km long and 1500 to 2500 km wide and it may rise to 2.3 km above the ocean floor.The feature is associated with a divergent plate boundary.As plate diverge, magma rises repeated and eventually cools to form the mid oceanic ridge.

iii) Island Arcs:Sometimes basalt eruption along the ridge or near may build up volcanoes that protrude above sea level to become Oceanic Island.They may vary in size. Example: Iceland,Japan, Hawaiian is lands, Mauna Loa, Easter Islands near the East Pacific ridge, west Indies.

iv) Magmatic Arc:It refers to island arcs at sea and belts of igneous activity on the edges of continents such as batholiths in mountain belts. Example:Aleutian Island.cascade volcanoes of the pacific North West,along Andes.

v) Mountain Belts:At a  convergent collision boundary,the sea floor is denser and will be subducted making the ocean thinner and narrower hence collision of the continents.Eventually the oceanic lithosphere breaks off leaving the continental crumple to form mountain ranges.

The thick sequences of sedimentary rocks that had built upon both continental margins are intensively.Example The Himalayas as India collided lided, Alps as African and Europe, Atlas in Northern Africa.In addition to that at a convergent destructive boundary,young mountain like the Andes form due to the folding of the young sediments.
vi) Rifting and associated features:At a passive divergent plate boundary ,the continental crust is stretched and thinned producing faulty landforms like the great East Africa Rift Valley.The faults may be path associated volcanic landforms. This may explain the volcanic landforms in the rifted areas of East Africa.
Due to thermal expansion emanating from rising mantle plume, it causes uplift of landscape.
vii) New Oceanic Crust:This is associated with a divergent plate margin where the would be gap is filled with the up welled magma to form a new oceanic crust. 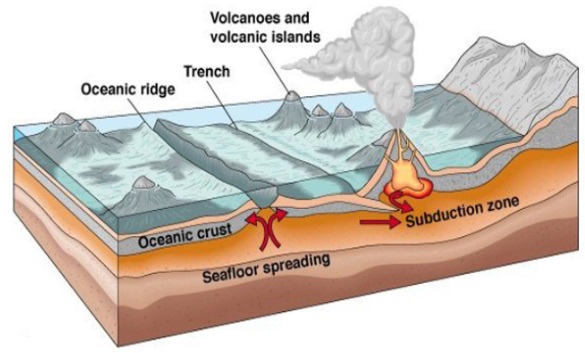