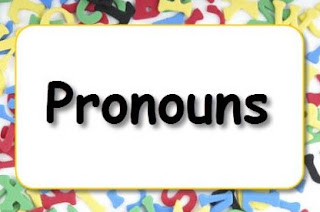 Definitions of  a Pronoun

- A pronoun is a word that can replace a noun in a sentence.

- A pronoun is a part of speech that is used in place of a noun or a noun phrase.

- The meaning of PRONOUN is a word (such as I, he, she, you, it, we, or they) that is used instead of a noun or noun phrase.

- A pronoun is defined as a word or phrase that is used as a substitution for a noun or noun phrase, which is known as the pronoun's antecedent.

- A pronoun is used in place of a specific noun mentioned earlier in a sentence so that you don’t have to keep saying/writing that particular noun.

- Pronoun is a part of speech that replaces a noun in a sentence, assigning people or things as the subject.

- A pronoun is a type of word that replaces a noun (reminder, a noun is a person, place, or thing).

- A pronoun is a word that you use to refer to someone or something when you do not need to use a noun, often because the person or thing has been mentioned earlier. Examples are 'it', 'she', 'something', and 'myself'.

A pronoun is a word that takes the place of a noun, noun phrase, or noun clause.

8 Types of Pronouns with Definitions and Examples

Pronouns are classified into several categories or types. We will discuss the 8 types of pronouns in English. They are:

Personal pronouns are marked in bold for easy identification.

- I have a sweet puppet.

- We have been playing cards since morning.

- You are very good at English.

- He had an evergreen memory in his childhood.

- She is going to arrange a meeting with her colleagues.

- They will be played in the final match.

Possessive pronouns are marked in bold for easy identification.

- It is the responsibility of ours.

- You have to fulfill of dreams of yours.

- They are going to build the building theirs.

Reflexive pronouns are marked in bold for easy identification.

- I regret the misdeed of myself.

- It would help if you were careful of yourself.

- We bought some food for ourselves.

- He claims himself as a brilliant student.

- She wants to take herself in a new position.

- They think of themselves as a part of the company.

Demonstrative pronouns are marked in bold for easy identification.

- This is the book I borrowed from you.

- Do you see that place before?

- These boys are playing cricket.

- It is a beautiful place I have ever seen.

A pronoun that indicates any unidentified person or thing is called an indefinite pronoun. For example, anyone, any one, some, someone, no one, anybody, somebody nobody, many, everyone, all, etc.

Indefinite pronouns are marked in bold for easy identification.

- Any of the books don’t match my curriculum.

- Is there anyone to answer this question?

- I want to buy some books.

- Would you please call someone to take me into the house?

- No one can disagree with this matter.

- Somebody help the poor.

- Nobody defeats him in this game.

- I have many clothes which I want to distribute to the orphan child.

- Everyone should concentrate on the class.

- All of the passengers missed the train.

A pronoun used to introduce a relative clause and connect it to an independent clause is called a relative pronoun. For example, who, whose, whom, which, etc.

Relative pronouns are marked in bold for easy identification.

- I have a sister who is very good at English.

- I don’t know whose book is on the table.

- He has a good friend whom he loves so much.

- My brother has a dog which is beautiful.

- What is the reason behind that story?

Interrogative pronouns are marked in bold for easy identification.

- Who is sitting in front of you?

- Whom do you want to love?

- Which smartphone do you prefer to buy?

- What is your opinion regarding this issue?

Distributive pronouns are marked in bold for easy identification.

- Each of the boys is taking part in the competition.

- Either they can do this task.

- Neither Jack nor Jonny attends the class.

Pronouns are small words that take the place of a noun. Pronouns are words like: he, you, ours, themselves, some, each... We can use a pronoun instead of a noun. If we didn't have pronouns, we would have to repeat a whole lot of nouns.

Personal pronouns represent specific people or things. We use them depending on:

Examples (in each pair, the first sentence shows a subject pronoun, the second an object pronoun):

When we are talking about a single thing, we almost always use it. However, there are a few exceptions. We may sometimes refer to an animal as he/him or she/her, especially if the animal is domesticated or a pet. Ships (and some other vessels or vehicles) as well as some countries are often treated as female and referred to as she/her. Here are some examples:

For a single person, sometimes we don't know whether to use he or she. There are several solutions to this:

We often use it to introduce a remark:

We also often use it to talk about the weather, temperature, time and distance:

demonstrate (verb): to show; to indicate; to point to

A demonstrative pronoun represents a thing or things:

Here are some examples with demonstrative pronouns, followed by an illustration:

Normally we use demonstrative pronouns for things only. But we can use them for people when the person is identified. Look at these examples:

We use possessive pronouns depending on:

There are four main interrogative pronouns: who, whom, what, which

Notice that whom is the correct form when the pronoun is the object of the verb, as in "Whom did you see?" ("I saw John.") However, in normal, spoken English we rarely use whom. Most native speakers would say (or even write): "Who did you see?"

Note that we sometimes use the suffix "-ever" to make compounds from some of these pronouns (mainly whoever, whatever, whichever). When we add "-ever", we use it for emphasis, often to show confusion or surprise. Look at these examples:

A reflexive pronoun is a type of pronoun that is preceded by the adverb, adjective, pronoun, or noun to which it refers, so long as that antecedent is located within the same clause.

We use reciprocal pronouns when each of two or more subjects is acting in the same way towards the other. For example, A is talking to B, and B is talking to A. So we say:

The action is "reciprocated". John talks to Mary and Mary talks to John. I give you a present and you give me a present. The dog bites the cat and the cat bites the dog.

There are only two reciprocal pronouns, and they are both two words:

When we use these reciprocal pronouns:

Note that many indefinite pronouns also function as other parts of speech. Look at "another" in the following sentences:

Notice that a singular pronoun takes a singular verb AND that any personal pronoun should also agree (in number and gender). Look at these examples:

A relative pronoun is a pronoun that introduces a relative clause. It is called a "relative" pronoun because it "relates" to the word that its relative clause modifies. Here is an example:

In the above example, "who":

There are five basic relative pronouns: who, whom, whose, which, that*

Who (subject) and whom (object) are generally only for people. Whose is for possession. Which is for things. That can be used for things and people only in defining relative clauses (clauses that are essential to the sentence and do not simply add extra information).