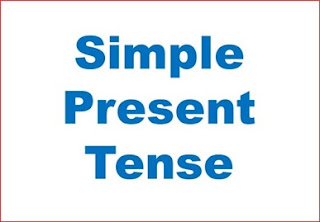 The Meaning of Simple Present Tense

The simple present is a verb tense used to talk about conditions or actions happening right now or habitual actions and occurrences.

The simple present, present simple or present indefinite is one of the verb forms associated with the present tense in modern English.

It is commonly referred to as a tense, although it also encodes certain information about aspect in addition to present time. The simple present is the most commonly used verb form in English, accounting for more than half of verbs in spoken English.

Simple present tense tell us the action every day has a habit,rotation or a daily habit

It is called "simple" because its basic form consists of a single word (like write or writes), in contrast with other present tense forms such as the present progressive (is writing) and present perfect (has written).

The simple present tense is one of several forms of present tense in English. It is used to describe habits, unchanging situations, general truths, and fixed arrangements.

The simple present tense is simple to form. Just use the base form of the verb: (I take, you take, we take, they take) The 3rd person singular takes an -s at the end. (he takes, she takes)

How do we make the Present Simple tense?

There are two basic structures for the Present Simple:

Look at these examples with the main verb like:

The structure/formula of a Simple Present Positive Sentence is – subject + main verb + object.

If the subject is a singular noun i.e. it, he or she, then the verb is suffixed by –s or –es. In case of plural nouns there is no change in the actual form of the verb. For example consider the below given sentences-

The structure of a Simple Present Negative Sentence is – subject + do not/does not + main verb.

If the subject is a singular noun or pronoun like – it, he, she then ‘does not’ is used and if the subjects are - they, we, I, you or a plural noun then ‘do not’ is used for the negative sentences.

Read the below given sentences for example-

You can do this grammar quiz. It tests what you learned on the Present Simple page.