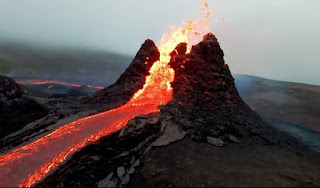 On 22 May 2021, Mount Nyiragongo in the Democratic Republic of the Congo began erupting. lava began to flow towards the city of Goma about 20 kilometers to the south.

As a result, 32 people died as a result of the eruption and 1,000 homes were destroyed.

The eruption of Mount Nyiragongo is similar to the eruption in 2002, which caused the death of 250 people.

Volcanic eruptions happen when lava and gas are discharged from a volcanic vent.

We have Two Short Videos for you

Residents blamed the Goma Volcano Observatory for not providing warning of the eruption. The World Bank had eliminated funding for the scientists performing the observation in 2020, and the observatory had stopped monitoring the volcano a few months later. On May 10, 2021, the observatory had issued a warning that seismic activity at Nyiragongo had increased, and had previously warned that the volcano's lava lake was filling up, increasing the chances of an eruption or earthquake-related disaster.

According to the scientific director of the Volcanic Observatory of Goma, Celestin Kasereka Mahinda, shortage of funding was the reason that made it difficult for the scientists at the Observatory to caution the public on the eruption. Mahinda also advised the people of Goma to avoid going to places that have been hit by the lava from the Volcano, thereby refraining from traveling unnecessarily, because the lavas are harmful and toxic.