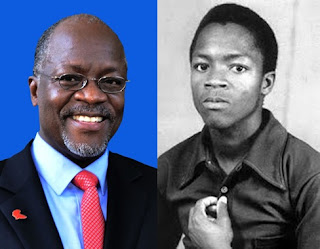 John Pombe Magufuli is a Tanzanian politician and the fifth President of Tanzania, in office since 2015. He was the chairman of the Southern African Development Community from 2019-2020.

John Pombe Joseph Magufuli was born on October 29, 1959 and raised in Chato, a village in Kagera region [now in Geita region]. He was born into the family of Christian-observant Mzee Joseph Magufuli and his wife Mama Suzana Magufuli. His late father Joseph engaged in mixed faming, and Magufuli grew up in typical village life, taking part in agricultural activities, especially raising his father’s cattle. He was sent to several schools for his primary and secondary education - Chato Primary, 1967-74; Katoke Seminary/secondary, 1975-77; Lake Secondary, 1977-78 and, for senior secondary education, Mkwawa High School, 1979-81.

Magufuli enrolled for teacher training to obtain Diploma in Education Science (Sc) in science subjects (Chemistry, Mathematics and Education) at Mkwawa College of Education from 1981 – 1982. He briefly taught Chemistry and Mathematics at Sengerema Secondary School (1982-83). After completing his military national service (1983-1984),during which time he crisscrossed between the Makutopora (Dodoma), Makuyuni (Arusha), and Mpwapwa (Dodoma) National Service Camps, Magufuli earned his Bachelor Degree BSc (Ed) at the University of Dar es Salaam majoring in Chemistry and Mathematics from 1985- 1988.

Later on, he quit his teaching job and was employed by The Nyanza Cooperative Union Limited as an industrial chemist. He remained there from 1989 to 1995, when he was elected as Member of Parliament (MP) representing Chato district. He was appointed Deputy Minister for Works in his first term as MP. He retained his seat in the 2000 election and was promoted to a full ministerial position under the same docket. After President Jakaya Mrisho Kikwete was requested to take office, he moved John Joseph Magufuli to the post of Minister of Lands and Human Settlement on 4 January 2006. Subsequently, he served as Minister of Livestock and Fisheries from 2008 to 2010 and again as Minister of Works from 2010 to 2015.

On 12 July 2015 Magufuli was nominated as CCM's presidential candidate for the 2015 election, winning the majority votes against his opponent Justice Minister and former United Nations Deputy Secretary General Miss Asha-Rose Migiro and the African Union Ambassador to the United States of America, Miss Amina Salum Ali for the party's nomination.

Although Magufuli faced a strong challenge from opposition candidate and previous CCM political party member Edward Lowassa in the election, held on 25 October 2015, Magufuli was declared the winner by the National Electoral Commission (NEC) on 29 October; he received 58% of the vote. His running mate, Samia Suluhu, was also declared Vice President. He was sworn in on 5 November 2015.

After taking office, Magufuli immediately began to impose measures to curb government spending, such as barring unnecessary foreign travel by government officials, using cheaper vehicles and board rooms for transport and meetings respectively

In July 2020 Magufuli was nominated as the CCM's presidential candidate in elections scheduled for October 2020.