ENGLISH - Poem - LOOK AT A MAP 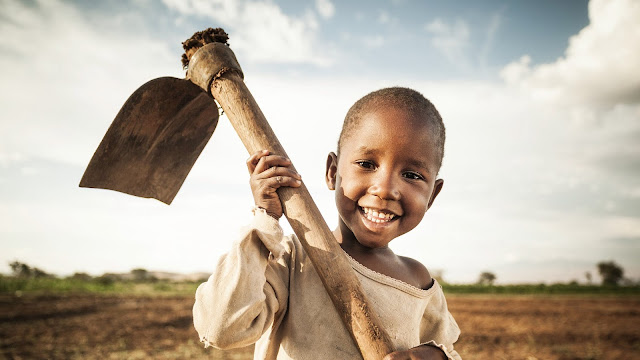 LOOK AT A MAP
Kajubi

Look at a map;
You will perceive a beautiful country
with rivers of fishes,
many valleys suitable for grain,
lakes overflowing with milk and honey,
mountains of good black soil
a few minerals,
yearning for full utilization:
Seventeen million people....

You look at the map;
You will not see the splendour of my country,
seventeen million souls
on this vast area of land,
the world calling them wretched.
And I here,
a chosen son of the land,
a son my people chose to confide in,
and give the last handful of grain,
from the barn,
so that strength may be given me
and I be able to undertake
the long, cumbersome safari
to fetch food for my people,
I am here
being loaded
with food that is inedible
to my people.

And my people
wait for me with high anxiety,
giving me an appealing stare,
but I,
heavy volumes intoxicating my head,
I
learning bourgeois economics,
learning the geography of alien lands
without being taught
how I can use it
in the reality of my people and country,
learning history,
craming dates and events without analysis,
learning political education
so that I may not follow any ideologies
begot not at Arusha
Learning science
on the basis of pure theory,
and they, my people,
those wretched who made the sacred contribution,
wait for me
in the blindness of their ignorance,
and I here
wait for certificates and degrees
so that I may go
to sign vouchers,
to sign heaps of papers,
or to stand on stages
and encourage my people
to continuously send their children to school.

This is a poem by Kajubi that is based principally upon Nyererian philosophy of education “Education for Self Reliance”. Nyerere believed that those who receive the privilege of being educated have the duty to pay the sacrifice which others have made. They are like a man who has been given all the food in a starving village in order that he might have the strength to bring back the supplies from a distant place. If he takes his food and does not bring back help to his brothers, he is a traitor.

Similarly, if any of the young men and women who are given education by the people of the Republic of Tanzania adopt attitudes of superiority or fail to use their knowledge to help development of this country then they have betrayed our union. The persona is not a traitor but the food he brought is inedible (irrelevant education) to his people.

IRRELEVANCE OF WESTERN EDUCATION.
Education is believed to be the key for success and development. But if that education does not help to solve the problems in the society of its recipients then it becomes a lock of life. Immediately after independence, the nation organised the few resources we had to finance the education of few people who would later help the country to bring about development for the benefit of the majority. That is not what it turned out to be. Western education did not match to the immediate problems of our nation since it was irrelevant as it was based on mere theories, history and geography of the white people. Western Education trained people for white-collar jobs. The persona says
I am here/ being loaded/ with food that is inedible/ to my people.
He then shows that the kind of education he received was western-based; studying bourgeois economics, learning the geography of alien lands, learning history, cramming dates and events without analysis, learning political education that could not be translated into the context of Tanzanian needs. He says:
without being taught
how I can use it
in the reality of my people and country

DISAPPOINTMENT/DISILLUSION
Many citizens after the attainment of independence had great hopes and expectations from the educated elites who used the national resources to get education that would later help them to get development. The fact is the country that was once beautiful with hopes for success, blessed with natural resources like rivers of fishes, valleys suitable for grain, lakes overflowing with milk and honey, mountains of good black soil and minerals is no longer beautiful as it was thought to be.
The persona is disappointed because as he says in stanza 2 if you look at a map you will not see the splendour (beauty) of my country. People waited with anxiety for the educated ones to come back and liberate them in all walks of life. Unfortunately enough the educated ones were trained for white collar jobs like, signing vouchers, papers, and standing on stage to encourage people to send their children to school. This is disappointment.

PRIDE AND PATRIOTISM
The persona is proud of his country as it is blessed with all sorts of opportunities that promise for a brighter future. He asks people to look at a map and they will be able to identify one beautiful country. He is proud to be a citizen of this country that is blessed with rivers and lakes for fishing, valleys and mountains for agriculture, and minerals for economic development. He says:
Look at a map;
You will perceive a beautiful country
with rivers of fishes,
many valleys suitable for grain,
lakes overflowing with milk and honey,
mountains of good black soil
a few minerals,
yearning for full utilization:

BUILDING THE FUTURE
There were some efforts taken by the newly independent nation to build a better future for the people. Struggles were made to send few people to school who would later make policies and implement them to improve the nation’s living condition in all walks of life. The persona says;
And I here,
a chosen son of the land,
a son my people chose to confide in,
and give the last handful of grain,
*********
To fetch food for my people.
However the plan did not succeed as expected because the kind of education given to these chosen few was irrelevant to Tanzanian context. Educated people with certificates and degrees were given the kind of education that prepared them for working in the office doing paper works instead of solving problems in the rural communities. This was education for alienation and not education for liberation.

AWARENESS
The persona is aware of the fact that western education is irrelevant to Tanzanian problems. He is also aware that the recipients of western education were given the education that alienated them from their communities and went to work in offices most of which are located in towns. What they ended up doing was just paying lip service to their communities encouraging them to send their children to school to learn the same irrelevant education.

GUIDING QUESTIONS
1.    Comment on the language use.
The language used is simple straightforward and easy to understand. The choice of vocabularies like rivers of fishes, valleys, minerals and lakes show the natural resources; words like bourgeois economics, geography, history, political education show the irrelevance of western education.
There is also the use of figures of speeches like;
a)    Metaphor
Ø  Blindness of their ignorance (ignorance is compared to blindness)
b)   Personification
Ø  A few minerals yearning for full utilization (minerals cannot yearn)
Ø  The world calling them wretched (the world cannot call)
c)    Hyperbole
Ø  Lakes overflowing with milk and honey. (lakes cannot flow with milk and honey)
d)   Synecdoche
Ø  Seventeen million souls (souls here represent people)
e)    Symbolism
Ø  Food- knowledge
Ø  Milk and honey-opportunities for success
Ø  Suitable for grain –agriculture.
f)    Parallelism
to sign vouchers,
to sign heaps of papers,
or to stand on stages
and encourage my people
g)   Allusion
Ø  Lakes overflowing with milk and honey (from a biblical story of the land of Canaan)
h)   Alliteration
Ø  to fetch food for my people
Ø  or to stand on stages
i)     Barbarism
Ø  the long, cumbersome safari  (a Swahili word which means journey)
j)     anaphora
to sign vouchers,
to sign heaps of papers,
learning bourgeois economics,
learning the geography of alien lands
2.    Who is the persona in this poem? How do you know?
The persona is an educated person who is aware of the irrelevance of western education. This is proved in stanza three where he says “and I here/wait for certificates and degrees so that i may go to sign vouchers”
3.    What is the tone and mood of the poem?
The tone of the poem is happy at the beginning but later it changes into a disappointed tone. The persona is disappointed and this creates a disappointed mood to the readers.
4.    What kind of the poem is this?
It is a modern/free verse poem but specifically it is a Descriptive poem as it describes the beauty of the country and the nature of Western Education.
5.    Comment on the structure of the poem.
The poem is made up of three stanzas of unequal number and uneven length of lines.
Stanza one has 9 verses, stanza two has 18 verses and stanza three has 30 verses.
6.      In stanza one the poet says “look at a map you will perceive a beautiful country” later in stanza two he says “you look at a map you will not see the splendour (beauty) of my country” why is there this immediate change of opinion?
The resources of the country mentioned in the first stanza made the persona happy and optimistic for a better future. But those resources have not been able to solve the problems of the masses so they are benefiting only the few chosen one who acquired western education and the masses have nothing for which to be proud of. As a result they no longer see the beauty of their country.
MESSAGES
Ø  There should be proper utilization of natural resources for the benefit of all citizens.
Ø  We should adopt education system that is relevant to our context/ environment
Ø  Educated people should use their education for the benefit of the society at large.
Ø  Leaders ought to create hopes to those they lead.
RELEVANCE
The poem is relevant in a number of ways;
Ø  Western education is in most cases irrelevant to our societal problems.
Ø  National resources are exploited by the minority while the majority have nothing to share.
Ø  People are disappointed by the promises of independence.
Ø  There are educated people who don’t go back to their rural communities to solve the problems, but they remain in their offices signing papers