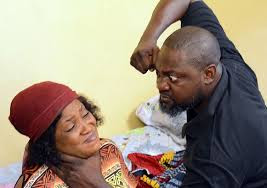 About the Author
Richard Mabala is originally from the United Kingdom and gave up his passport to become an official Tanzanian. He has been an educator, professor at a university, a poet, and a recognized writer of Secondary school English readers (Mabala the Farmer, Hawa the Bus Driver, and others).

This is a poem by Richard Mabala that talks about a woman who complains because of being beaten by her husband simply because she had asked whether he had brought home the cotton money. Moreover, the poet talks about double beating in a sense that there are people who transfer their anger to the inferior whenever annoyed by the superior. In the poem the man becomes angry because the company has not paid him the cotton money, but he transfers his wrath to his wife who asks him meekly whether he brought home the money as they were promised.

POVERTY
The poem presents a peasant family that depends on cotton farming for survival. The hungry man is an angry man. Both the wife and her husband are unhappy due to poor life they are living and the fact that their only means of income is cultivation of cotton. They depend on the money for food, clothes, school uniforms and the like. So failure to get the money on time implies announcing a doom to them. While they wait for money optimistically, there comes a pessimistic answer. “Come again next week”. Look at the following lines;
Three months without washing my kanga
Three months of hiding my children from school
because my daughters skirt is now too short.
The company buying cotton has not paid their money but keeps on giving them fake promises and it is this scenario that causes family conflict. The wife laments;
Still no kanga
No uniforms
Come again next week.

SPOUSE BEATING
In most African societies women are beaten as a way of silencing them even when they seem to ask some logical questions about critical issues affecting their lives. The woman in the poem is beaten by her husband simply because she has asked an innocent question whether the money they have been waiting for three months has been paid at last. The man grows angry at the question and beats up his wife. This also signifies the weak position of women in the society.
My faulty?
I only asked him
So meekly, I assure you,
Whether at last
He’d brought home the cotton money
Haven’t we all waited
Three months to be paid
They waited for three months to be paid. Yet when the day comes the reply comes out that ‘come again next week’. This makes him angry and because he can’t fight the superior he shifts his anger to his wife. Look here;
But tell me,
When the hummer pounds the nail
And the nail bites,
Into the wood
Who is the wood to blame?

CLASSES
This theme doesn’t appear at the surface; nevertheless we cannot ignore the fact that there are classes in this society. On one side there is high class that owns the money. They are able to buy cotton from peasants but do not pay them on time instead they give them fake promises which cause family conflicts for poor people.
On the other side there is a proletariat class comprising mainly of peasants. These are the ones suffering and find it hard to get their daily bread. When the rich withhold their money they live in total despair. Look at these lines;
Three months without washing my kanga
In case its threadbare shell
Crumbles to nothingness
Three months of hiding the children from school

COOPERATION
This community seems to live a cooperative life just how like most other rural African communities live. It is important to get along well with people (neighbours) so that when you have a problem they may come for your rescue. The woman shows it were the neighbours who came to separate them and rescued her from the terrible beating.
Only then did you
My neighbours
Rush in to separate us.

IRRESPONSIBILITY
The ruling class is irresponsible for providing services on time. The farmers have sold their cotton to the company but they are not given the money on time. This makes the poor farmers live a miserable life. They cannot afford to buy new clothes and wash their clothes. Even children fail to go to school because their uniforms are worn out. When they ask they are told to go again the following week. “Come again next week!” It is this act that results to family conflicts.

FAMILY CONFLICT
The poet discusses the problem of family conflict in African families but he discusses it from a different angle. In this poem he shows that the source of conflict may not necessarily come from within. There are times when a husband is annoyed by someone but he cannot fight against that person/system because it is superior to him, as a result he shifts his anger to his wife. This is the concept of double beating as presented in the poem? The woman says
When the hummer pounds the nail
And the nail bites,
Into the wood
Who is the wood to blame?

GUIDING QUESTIONS
a)    How many stanzas are there?
There are 7 (seven) stanzas
b)   Explain the mood and tone of the poem.
The tone sad/unhappy and lamenting and so it creates a sympathetic mood to the listeners towards the readers.
c)    How many verses are in the poem?
There are 63 verses in the whole poem
d)   Who is the persona in this poem? How do you know?
The persona is a woman who is oppressed by her husband. This is evident as he she says “Today my husband beat me”.
e)    Is the persona happy in this poem? Give two reasons
The persona is unhappy in the poem because;
1.      First she has been beaten by her husband for asking for the cotton money.
2.      Second because of the state of poverty and the fact that their cotton money has not been paid; they are just given fake promises “come again next week’.
f)    What is the message in this poem?
Ø  It’s not good to shift your anger to someone who has not wronged you.
Ø  Spouse beating is illogical. It should be discouraged
Ø  Leaders should be responsible in providing services to the citizens on time.
Ø  We should fight against poverty with all our mighty.
Ø  Classes are obstacles to development.
g)   What type of the poem is this?
It is a freeverse/modern poem but specifically it is a narrative poem as it tells a story of what happened to the woman.
h)   Comment on the rhyming pattern.
The poem has irregular rhyming scheme.
i)     What is the relevance of the poem?
The poem is generally relevant in many ways;
i.            Spouse beating is still a common problem among African societies. E.g. the Kuryans are mostly quoted on this issue.
ii.            Also poverty is rampart in Tanzania especially in rural communities.
iii.            There are people who depend solely on agriculture for survival and when the market collapses they collapse as well.
iv.            There are family conflicts in most families because of men superiority and women inferiority.
j)     Comment on the language use
The language used is generally simple and has some figures of speech and sayings.
i.             Rhetorical question
Ø  My fault?
Ø  Who is the wood to blame?
ii.           Anaphora
Ø  Three months to be paid,
Ø  Three months without washing my kanga
iii.          Barbarism
Ø  Three months without washing my kanga (kanga is a Swahili word)
iv.          Personification.
Ø  The blood spurted angry to the ground
Ø  Innocent question punished
Ø  The world that had wronged him
Ø  Who is the wood to blame? {the wood can’t blame}
Ø  And the nail bites mercilessly into the wood (the nail cannot bite)
v.            Saying
When the hummer pounds the nail and the nail bites into the wood, who is the wood to blame?
vi.          Alliteration
And the brow furrowed in frustration