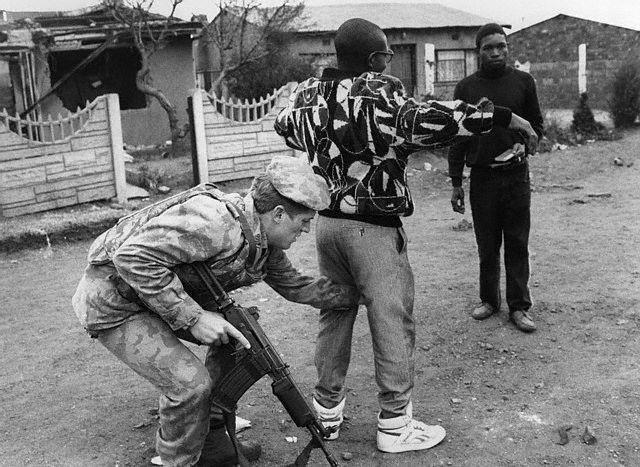 The white man shouted, roared, beat and kicked him
My black brother did not tremble

In his eyes there kindled the flames of rage, of dried tears, of force.
My black brother did not stir, did not answer, did not tremble

Dambara was born in 1939 in the Cape Verde Islands. He was writing mainly in the Guinea Creole. He was a member of the Independence Party for Guinea and Cape Verdes in Guinea Bissau. The poem is basically addressing the controversy that existed during colonial time between the blacks and whites. The main problem addressed is the racial prejudice and discrimination exercised by Whites over Blacks.

RACIAL PREJUDICE
This is a feeling of not liking a group of people or unfair treatment of them because they are a different race, sex, religion, etc. In this poem the white man seems to treat a black man with racial prejudice. However the poet shows that despite the fact that Blacks were looked down upon by the white people they did not give up easily. They remained strong and firm even when they were intimidated.
The white man looked him in the face
My black brother did not stir

CLASSES
There are two major classes in this poem identified by their colour differences. There is a class of the white people who have both political and economic power and they treat the Africans spitefully. The presence of the word “black brother” and “white man” show not only the colour differences but also existence of the social strata which led inevitably to mistreatment of Africans by the Europeans.
The white man shouted, roared, beat and kicked him
My black brother did not tremble

TORTURE AND OPPRESSION
The whites oppressed the Africans in all walks of life. The Africans were beaten, and tortured in their own countries. In the second stanza the poet creates the pictures of the kind of life the Africans went through under the hands of the colonialists.
The white man shouted, roared, beat and kicked him
My black brother did not tremble
This kindled a feeling of violent anger in which Africans would revenge and struggle for freedom. He points this out in this stanza when he says;
In his eyes there kindled the flames of rage, of dried tears, of force.

PERSEVERANCE AND COURAGE
The Africans were able to tolerate all the mistreatments, torture, oppression and racial injustices done to them by the white men. One of the qualities they registered was the spirit of perseverance and courage to face whatever situation they found themselves in. despite being humiliated by the whites, blacks remained firm and determined.
In his eyes there kindled the flames of rage, of dried tears, of force.
My black brother did not stir, did not answer, did not tremble
They had feelings only Africans could understand. In a way, it can be concluded that the whites were planting the seeds of their own destruction.
In his steady eyes there kindled the flames of a force which only
The black man knows

i.            What is the poem about?
The poem is about the torture, oppression and humiliation that Africans went through during the colonial time. The treatment they experienced made them angry but they persevered until the right time.
ii.            What is the type of the poem?
The poem is a modern/free-verse of Lyric type as it expresses the strong feelings of this individual about the mistreatments the Africans went through and they were tortured.
iii.            Who is the persona? And how do you know?
The persona is An African man who witnesses the oppression and torture done to his brethren and is reporting this to other Africans so that they may find a way to revenge. He addresses the oppressed as “My black brother” did not stir

iv.            What is the tone and mood of the poem?
The tone is sad and angry as the persona addresses the torture his fellow blacks are passing through. E.g. in this line “The white man shouted, roared, beat and kicked him”
v.            Comment on the language used.
The poet has used the language that evokes the feeling of hatred towards the white men by carefully choosing the vocabularies that communicate his message across. The words, white man and black brother in the poem tell directly the issue of racial discrimination that is involved. He goes on to show the kind of relationship the two races have it is that of “shouting, beating, and kicking”
The word “flames” is used to show that there was a kind of anger and hatred developing within the minds of the Africans that would later explode into fire (war).
Furthermore there are few figures of speech included in the poem such as
Þ    Symbolism
The word “flames” symbolises the outbreak of war that was developing from within
Þ    Parallelism
The white man shouted, roared, beat and kicked him
My black brother did not stir, did not answer, did not tremble
Þ    Anaphora
My black brother did not stir, did not answer, did not tremble
Þ    Reiteration
The words “My black brother” are repeated throughout the first to the third stanza for emphasis and instilling the spirit of brotherhood.
Þ    Alliteration
My black brother
…the flames of a force
vi.            What are the lessons that we learn from the poem?
Þ    We should discourage torture, injustice and oppression in our societies.
Þ    Racial injustice should be discouraged at all cost.
Þ    Social strata create unnecessary conflicts in our societies.
Þ    Courage and perseverance are sometimes important when you want to achieve a particular cause.
vii.            Is the poem relevant today?
Þ    The poem is still relevant today because the forms of injustice, oppression, torture and the like are still prevalent in most African countries.
Þ    There are classes of people in our societies and people are treated according to the social stratum they belong to.