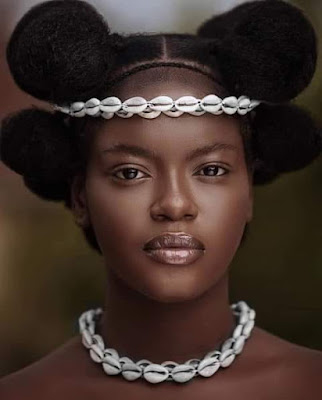 My husband tells me
I have no ideas
Of modern beauty.
He says
I have stuck
To old-fashioned hair styles.

He says
I am stupid and very backward,
That my hair style
Makes him sick
Because I am dirty.

It is true
I cannot do my hair
As white women do.

Listen,
My father comes from Payira,
My mother is a woman of Koc!
I am a true Acoli
I am not a half-caste
I am not a slave girl;
My father was not brought home
By the spear
My mother was not exchanged
For a basket of millet.
Ask me what beauty is
To the Acoli
And I will tell you;
I will show it to you
If you give me a chance!

You once saw me,
You saw my hair style
And you admired it,
And the boys loved it
At the arena
Boys surrounded me
And fought for me.

My mother taught me
Acoli hair fashions;
Which fits the kind
Of hair of the Acoli,
And the occasion.

Listen,
Ostrich plumes differ
From chicken feathers,
A monkey’s tail
Is different from that of a giraffe,
The crocodile’s skin
Is not like the guinea fowl’s,
And the hippo is naked, and hairless.

A white woman’s hair
Is soft like silk;
It is light
And brownish like
That of a brown monkey,
And is very different from mine.
A black woman’s hair
Is thick and curly;
It is true
Ring-worm sometimes eat up
A little girl’s hair
And this is terrible;
But when hot porridge
Is put on the head
And the dance is held
Under the sausage-fruit tree
And the youths have sung

You, Ring worm
Who is eating Duka’s hair
Here is your porridge,
Then the girl’s hair
Begins to grow again
And the girl is pleased.

This is a short extract from a long poem called “song of Lawino” which is almost entirely based on the conflict between old and new ways of life. So it is based on what Lawino thinks as a treasure for Africans as contrasted with what Ocol thinks on his side. (Although their names do not appear anywhere throughout the poem).

Although the poem is but a small part of a long poem with several themes, still some of these broader themes can be narrowly extracted from this poem. These include; identity and awareness, African culture vs European culture, traditional healing, protest and the position of women.

IDENTITY AND AWARENESS
Africans need to be aware of their identity. In this poem Lawino reacts to her husband’s complaint. She turns her husband’s complaint into a praise-song for herself and her people. She does so by showing that she is aware of her identity as a black African woman and proud of it. Just like all other women of other races are proud of theirs Lawino sees no need why she should abandon hers. In lines 15-20 she says;
Listen
My father comes from Payira,
My mother is a woman of Koc!
I am a true Acoli
I am not a half-caste
I am not a slave girl

AFRICAN CULTURE vs EUROPEAN CULTURE
In ‘Song of Lawino’ the poet discusses a lot of conflicts between African culture against European culture in most aspects. This small part of the poem centres entirely on hairstyles alone. Lawino shows that all people were created naturally beautiful and should be proud of how they are. For Lawino there are no reasons for Africans to do their hair like white women because white women never wish to do theirs like Africans. She uses the images ostrich plumes, chicken feathers, crocodile skin, etc to show that every creature has a point of departure from other creatures. No one creature should ever try to change and become like any other. The same applies for people from different races.

TRADITIONAL HEALING
Moreover, Lawino shows how Africans used to deal with different social and natural phenomena. Although it might seem as a kind of incantation, it helped to deal with unusual phenomena. For example she says if a ring-worm has eaten the little girl’s hair, all they do is put hot porridge on the head, hold a dance, sing a song, and then the hair grows again. This traditional ritual is still relevant to some societies today.

PROTEST
Lawino shows an open protest against European culture that is invading African culture. She does all it takes to educate African women to love and care for what they have, believe in who they are, and what they want to do with their lives. She protests doing her hair like white women. She says;     It is true/I cannot do my hair/As white women do

POSITION OF WOMEN
(1) True and strong upholder of African culture
Lawino in this poem represents a class of women who are proud of their culture and identity. They can’t compromise their standards just to please their husbands
(2) Care taker for children
Lawino shows that she behaves the way she does because her mother took time to teach her. It is always believed that most of the behaviours that we have were learnt during childhood. It is up to parents to teach their children good manners and they will not abandon them to old age.  She says; my mother taught me/Acoli hair fashions/which fits the kind/of hair of the Acoli/and the occasion

GUIDING QUESTIONS
a.       What does the title of the poem “the graceful giraffe cannot become a monkey” mean? OR what is the poem about?
The poet uses the symbol of the “giraffe” to represent the Acoli (Africans) and “monkey” as a symbol for whites. He shows how the conflict that occurs among Africans who have adopted European culture and those who have remained loyal to African identity. As the giraffe cannot become a monkey, neither can Africans become white people by their artificial designs.
b.      What is the tone and mood of the poem?
The tone is proud of her identity thus creates a proud mood for Africans towards their African identity.
c.       What type of the poem is it?
It is a freeverse/modern poem of Lyric type since it expresses strong feelings of the woman towards her husband’s insults.
d.      Comment on the figures of speech.
i.      Simile expression of comparison by using conjunctions
Ø  A white woman’s hair is soft like silk
Ø  And brownish like that of a brown monkey
Ø  The Indian’s hair resembles that of a horse, it is like sisal strings
ii.    Symbolism using one thing to represent another.
“a graceful giraffe” represents Africans.
“A monkey” represents Europeans.
iii.   Personification giving human qualities to inanimate beings.
Here the song is sung to a ring worm as though it is a human being
You, ringworm who is eating Dukas hair, here is your porridge
iv.   Anaphora (repeating words at the beginning of neighbouring clauses)
I am a true Acoli
I am not a half-caste
I am not a slave girl
e.       Who is the persona in this poem? How do you know?
The persona is an African woman (Lawino) although her name is not in the poem. We know she is a woman because she says “my husband tells me” and the way she describes different hair styles which are common to women.
f.        How does the woman (Lawino) see her identity?
Lawino sees her identity as something to be proud of because she believes that she is beautiful just the way she is and is not ready to change.
g.      Who is surer of his/her identity? The woman or her husband? Why do you say so?
Certainly, Lawino is surer of her identity. This is due to what she expresses from the beginning of the poem to the end. While she admits that all other women of other races are beautiful she is not ready to compromise her identity and become like them as suggested by her husband.
h.      How does Lawino react to the complaint of her husband?
Lawino does not insult back her husband but rather she turns her husband’s complaints into a praise song about herself and her people. In the process she gently tries to advise her husband to regain the identity he is busy losing.
i.        Who is Lawino speaking to in the poem?
Lawino is speaking to both her husband and Africans in general. When she says “My husband tells me…” she speaks to the audience (Africans) but then turns the attention to her husband “you once saw me” here she speaks specifically to her husband.
MESSAGE
Ø  Africans should be proud of their identity.
Ø  No matter what they do Africans will remain Africans.
Ø  You cannot change nature.
Ø  We should not react by insulting back people who have insulted us.
Ø  Sometimes traditional healing is effective.
RELEVANCE
The poem is relevant today in a number of aspects.
Ø  There are African women today who wish to do their hair like white women do.
Ø  There are black women who never wish to do their hair like white women. They remain natural and proud of their identity.
Ø  There are men who pressurize their wives to do their hair like whites.
Ø  Traditional healing is still relevant in some societies.