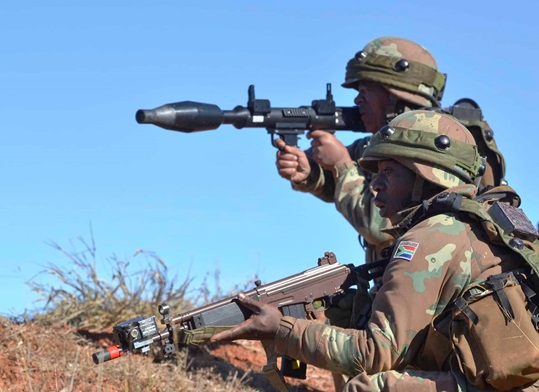 Frontline valleys and plains of events and history.

The term “Frontline” means an area where the enemies are facing each other during a war and where fighting takes place. So the poem “Frontline” was written by a South African militant with the African National Congress George Shea reflecting the battlefield atmosphere in South Africa during the Apartheid Policy. He tries to educate his fellow countrymen on the importance of going to the frontline and fight against the oppressor. It is only at the battlefield they will be able to bury the persecutions and burdens of years and even if it means dying at the warfront, this will be a noble death because their names will never die years to come.

UNITY AND SOLIDARITY
Unity and solidarity are attested and proven weapons that conquer any powerful power that rise against the oppressed. When the lower class that is exploited and oppressed by the ruling class unite together with a common mission and fight with one determination they are sure to win their cause. In this poem the poet urges his fellow oppressed to unite together and move to the frontline and fight a war of redemption. He gives the assurance to other freedom fighters that he will also be there at the frontline supporting the fight. He says;
Trust me brother you will not be alone there (line 5)
Brother truly my shadow will be next to yours (line10)

SACRIFICE AND COURAGE
Sacrifice is very important in any struggle though it is also bitter. However in this poem, the persona shows that he does not fear the frontline because by the way that is where he belongs. He is bound to die one day so it’s better to die a noble death in which his name will live to be remembered. He is aware of the dangers involved but he is not ready to retreat since it’s only by fighting they will be able to get equality, freedom and peace. In lines (11-15) he says;
Frontline,
I know it is bitter but I like it.
I like it particularly because it is bitter.
I like it because it is where I belong.
For out of bitterness comes equality, freedom and peace

ARMED STRUGGLE
The title of the poem ‘Frontline’ suggests the presence of armed struggle. The oppressed have decided to fight a war of redemption in order to gain equality, freedom and peace. Moreover he shows no fear that he might die at the frontline because by dying he might as well be burying the ‘persecutions and burdens of ages’ altogether. In this case he has nothing to fear because that is te only place to test whether he is a man of consciousness with a direction in life. He says:
Frontline
Where manhood and consciousness is tested
The only place to bury persecutions and burden of ages
The only place to declare names immortal

COLONIAL TORTURE AND OPPRESSION
The colonial governments and their administrative machinery oppressed the Africans and subjected them under harsh working and living conditions. This evoked a feeling of hatred towards the white colonisers who were reluctant to grant the Africans their citizenship rights. As a result of the prolonged oppression, humiliation, torture and persecutions the Africans had no option but to take up arms against the colonisers and drive them away by force.
The only place to bury persecutions and burden of ages
The African not only lost their freedom but they were treated unfairly compared to their Whites counterparts. As a result only the frontline could assure them of society in which equality, freedom and peace reign.
For out of bitterness comes equality, freedom and peace

HOPES AND OPTIMISM
The persona is optimistic from the beginning when he shows his fellow militants that at the end of the struggle there is a glimpse of hope. It is possible that they might lose their lives in the process “bullets will graze on man and grass” but he shows that death will not be only on their side, but the enemy too “will fall and never to rise.” This is to say, the enemy is not immune to the death at the frontline so it is worthwhile.

i.      What is the poem about?
The poem is about a freedom fighter who calls for the actions from his fellow oppressed to take up arms and join the war of independence at the frontline. He has hopes that they will be able to defeat the enemy and get freedom, equality and peace. But if they die at the frontline at least their names will not die but they will be remembered in the years to come.
ii.      What is the type of the poem?
This is a modern/Free-verse poem of Lyric type as it expresses strong feelings of a militant towards his fellow oppressed to take up arms against the oppressor.
iii.      What is the tone of the poem?
The tone is sad, angry and hatred towards the oppressor because they have been subjected to oppression and persecution for a long time.
iv.      Who is speaking in the poem? How do you know?
The persona is a militant because he suggests going to the frontline when the roll is called. “I will be in the front – line where the roll is called”
v.      Comment on the language use.
The language used is simple and easy to understand. He has made use of figures of speech not only to colour his work but also to drive the message home.
Figures of speech
Þ    Reiteration
The word “Frontline” is repeated three times for emphasis.
Þ    Personification
Where bullets will graze on man and grass
Þ    Symbolism
My shadow
Þ    Irony
I like it particularly because it is bitter.
vi.      Show the messages from this poem.
Þ    United we stand divided we fall. In any struggle all the people need to join hands and fight against the common enemy.
Þ    Sacrifice is very important in any struggle. Some people have to die so that others may live in peace.
Þ    We must fight against all forms of injustice, oppression, and torture from the ruling class.
Þ    We must be ready to volunteer in any struggle.
Þ    We are bound to die one day it is better to die fighting so that your name can be remembered.
vii.      Is the poem relevant to Tanzania today?
Þ    The poem is very relevant to Tanzania today because;
Þ    We still experience the torture and oppression from the ruling class.
Þ    Unity and solidarity are still necessary tools for any struggle
Þ    There are people who have sacrificed a lot if fighting for freedom in our country and neighbouring countries and their names are here to stay. Mwalimu J. K. Nyerere is just one case in point.