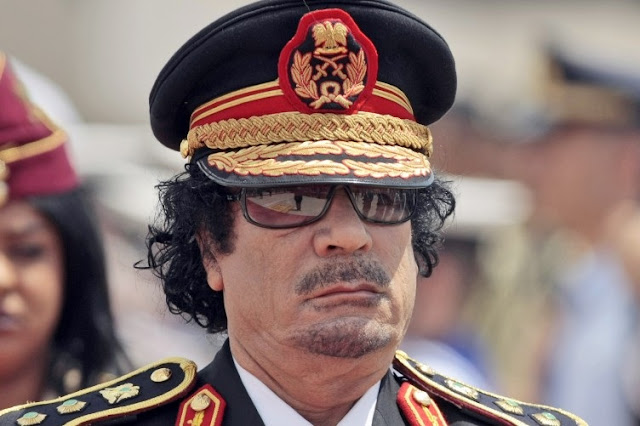 Muammar Mohammed Abu Minyar Gaddafi (1942 – 20 October 2011), commonly known as Colonel Gaddafi, was a Libyan revolutionary, politician and political theorist. He governed Libya as Revolutionary Chairman of the Libyan Arab Republic from 1969 to 1977 and then as the "Brother Leader" of the Great Socialist People's Libyan Arab Jamahiriya from 1977 to 2011. He was initially ideologically committed to Arab nationalism and Arab socialism but later ruled according to his own Third International Theory.

Born near Sirte, Italian Libya, to a poor Bedouin family, Gaddafi became an Arab nationalist while at school in Sabha, later enrolling in the Royal Military Academy, Benghazi. Within the military, he founded a revolutionary group which deposed the Western-backed Senussi monarchy of Idris in a 1969 coup.
he introduced sharia as the basis for the legal system and promoted "Islamic socialism".

Amid the 2011 Arab Spring, protests against widespread corruption and unemployment broke out in eastern Libya. The situation descended into civil war, in which NATO intervened militarily on the side of the anti-Gaddafist National Transitional Council (NTC). The government was overthrown, and Gaddafi retreated to Sirte, only to be captured and killed by NTC militants.