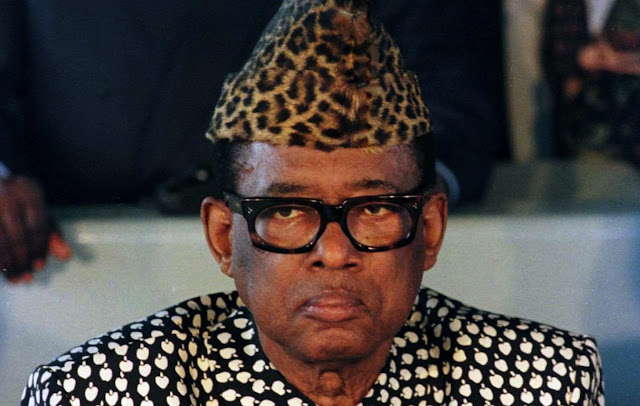 Mobutu Sese Seko Kuku Ngbendu Wa Za Banga born Joseph-Désiré Mobutu; 14 October 1930 – 7 September 1997) was a Congolese politician and military officer who was the President of Zaire (renamed from the Republic of the Congo (Léopoldville) and later to the Democratic Republic of the Congo in 1971) from 1965 to 1997. He also served as Chairman of the Organisation of African Unity from 1967 to 1968.

During the Congo Crisis, Mobutu, serving as Chief of Staff of the Army and supported by Belgium and the United States, deposed the democratically elected government of nationalist Patrice Lumumba in 1960. Mobutu installed a government that arranged for Lumumba's execution in 1961, and continued to lead the country's armed forces until he took power directly in a second coup in 1965 to become the country's military dictator.

To consolidate his power, he established the Popular Movement of the Revolution as the sole legal political party in 1967, changed the Congo's name to Zaire in 1971, and his own name to Mobutu Sese Seko in 1972. Mobutu received strong support (military, diplomatic and economic) from the United States, France and Belgium, who saw him as the strongest pillar of anti-communism in Francophone Africa; he also built close ties with the governments of Apartheid South Africa, Israel and the Greek military junta.

By 1991, economic deterioration and unrest led him to agree to share power with opposition leaders, but he used the army to thwart change until May 1997, when rebel forces led by Laurent-Désiré Kabila expelled him from the country. Already suffering from advanced prostate cancer, he died three months later in Morocco. Mobutu became notorious for corruption, nepotism, and the embezzlement of between US$4 billion and $15 billion during his reign. He was known for extravagances such as shopping trips to Paris via the supersonic and expensive Concorde. He presided over the country for more than three decades, a period of widespread human rights violations.