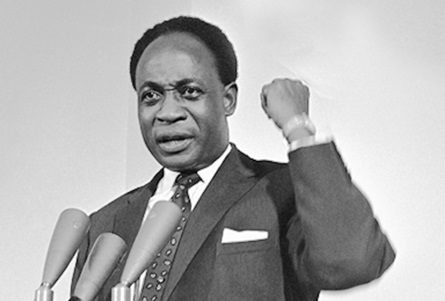 Kwame Nkrumah was born on 21 September 1909 in Nkroful, Gold Coast (now in Ghana) to a poor and illiterate family. Nkroful was a small village in the Nzema area, in the far southwest of the Gold Coast, close to the frontier with the French colony of the Ivory Coast. His father did not live with the family, but worked in Half Assini where he pursued his goldsmith business until his death. Kwame Nkrumah was raised by his mother and his extended family, who lived together in traditional fashion, with more distant relatives often visiting. He lived a carefree childhood, spent in the village, in the bush, and on the nearby sea.

By the naming customs of the Akan people, he was given the name Kwame, the name given to males born on a Saturday. During his years as a student in the United States, though, he was known as Francis Nwia Kofi Nkrumah, Kofi being the name given to males born on Friday. He later changed his name to Kwame Nkrumah in 1945 in the UK, preferring the name "Kwame". According to Ebenezer Obiri Addo in his study of the future president, the name "Nkrumah", a name traditionally given to a ninth child, indicates that Kwame likely held that place in the house of his father, who had several wives.

Nkrumah never returned to Ghana, but he continued to push for his vision of African unity. He lived in exile in Conakry, Guinea, as the guest of President Ahmed Sékou Touré, who made him honorary co-president of the country.
In failing health, he flew to Bucharest, Romania, for medical treatment in August 1971. He died of prostate cancer in April 1972 at the age of 62 while in Romania.

Nkrumah was buried in a tomb in the village of his birth, Nkroful, Ghana. While the tomb remains in Nkroful, his remains were transferred to a large national memorial tomb and park in Accra, Ghana.