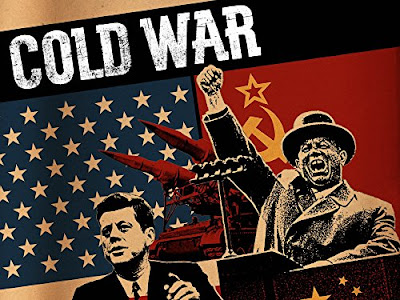 The Cold War was a period of geopolitical tension between the Soviet Union and the United States and their respective allies, the Eastern Bloc and the Western Bloc, after World War II. The period is generally considered to span the 1947 Truman Doctrine to the 1991 dissolution of the Soviet Union.

The term "cold" is used because there was no large-scale fighting directly between the two superpowers, but they each supported major regional conflicts known as proxy wars. The conflict was based around the ideological and geopolitical struggle for global influence by the two powers, following their temporary alliance and victory against Nazi Germany in 1945.

The doctrine of mutually assured destruction (MAD) discouraged a pre-emptive attack by either side. Aside from the nuclear arsenal development and conventional military deployment, the struggle for dominance was expressed via indirect means such as psychological warfare, propaganda campaigns, espionage, far-reaching embargoes, rivalry at sports events and technological competitions such as the Space Race.

The West was led by the United States as well as the other First World nations of the Western Bloc that were generally liberal democratic but tied to a network of authoritarian states, most of which were their former colonies. The East was led by the Soviet Union and its Communist Party, which had influence across the Second World. The US government supported right-wing governments and uprisings across the world, while the Soviet government funded communist parties and revolutions around the world. As nearly all the colonial states achieved independence in the period 1945 – 1960, they became Third World battlefields in the Cold War.

The Cold War period of 1985 – 1991 began with the rise of Mikhail Gorbachev as General Secretary of the Communist Party of the Soviet Union. Gorbachev was a revolutionary leader for the USSR, as he was the first to promote liberalization of the political landscape (Glasnost) and capitalist elements into the economy (Perestroika); prior to this, the USSR had been strictly prohibiting liberal reform and maintained an inefficient command economy.

The USSR, despite facing massive economic difficulties, was involved in a costly arms race with the United States under President Ronald Reagan. Regardless, the USSR began to crumble as liberal reforms proved difficult to handle and capitalist changes to the economy were badly instituted and caused major problems.

The Cold War came to an end when the last war of Soviet occupation ended in Afghanistan, the Berlin Wall came down in Germany, and a series of mostly peaceful revolutions swept the Soviet Bloc states of eastern Europe in 1989.