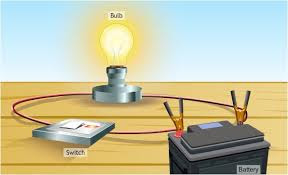 TOPIC 2: CURRENT ELECTRICITY
Electric current is the rate of charge flow past a given point in an electric circuit, measured in Coulombs/second which is named Amperes. In most DC electric circuits, it can be assumed that the resistance to current flow is a constant so that the current in the circuit is related to voltage and resistance by Ohm's law. The standard abbreviations for the units are 1 A = 1C/s.


Concept Of Current Electricity
Current Electricity
Define current electricity
Current electricity is a fundamental quantity and is the amount of charge passing a given point in a circuit divided by the time required for the passage of charges.
Electrical current (I) =quantity of charge (Q)/Time (t)
I =Q/t
Q = I.t
Electric current = rate of flow of charge
= (the number of charge carried per second x charge of a single electron)
From this definition the SI unit of an electric current is I =Columbus(C)/Second (s)
I = c/s = A
This unit is commonly known as an Ampere (A). Other units are milliamperes (mA), kilo amperes (KA) and Microampere (mA).
Their equivalents to the ampere are as follows:
1A = 10-3mA
1A= 10-6mA
1KA = 1000A
So when a steady electric current of 1A is flowing in a circuit a coulomb of charge passes a given point of the circuit per second.
An instrument used to measure electric current is called an Ammeter.
In this chapter we shall study the sustained movement of electric charge called electric current. To maintain a steady flow of electricity charge capable of moving and ways of causing them to move. Secondly, there must be a closed path around which the charge moves. This path is known as electric circuit.
A coulomb
This is the quantity of electricity, which passes a given point in circuit in 1 second when a steady current of 1 ampere flows.
In electric current there are flows of electrons through the conductor. Electrons are negatively charged while protons are positively charged. The motion of the charge through the circuit transfers energy from one point to another. This means that the actual directors of an electric current are opposite to the conventional direction.
Uses of current electricity
Current electricity is mainly used for:

Simple Electric Circuits
Simple Circuit Components
Identify simple circuit components
An electric circuit contains a source of moving charge (battery or generator), connecting wires made of conducting materials (usually copper metal) and various electrical devices such as bulbs, switches, resistors, ammeters and voltmeters.
Voltmeters measure potential difference in volts. While resisters opposes the flow of current. The circuit may also contain devices for controlling the amount of current. These include:
The table below shows list of some common circuit component and their purpose.

The Concept of Current, Voltage and Resistance
Explain the concept of Current, Voltage and Resistance
CURRENT
An electric current in a material is the passage of charge through the material. In metals free electrons carry charge. In solutions such as sodium chloride it is carried by charged particles known as ions.
Insulators like wood and plastic do not contain charge carriers at all as every electron is firmly fixed onto their atoms. The electrons are not free to move.
The rate of flow of electrons in a material is called electric current. It is measured in amperes (A) using an Ammeter. Connection can damage them. Therefore when connecting the ammeter, the red wire should be connected to the +ve terminal of a battery.
A current of 1A is equivalent to a flow of6.25 x 1018electrons per second and 1 electron has a charge of 1.6x 10-19c.
Current in simple circuit is the same at all points.
Once the circuit is complete, electric charges inside cells and other sources of electric charge are forced out into the circuit.
The electric energy is normally given out as light and heat, as energy goes through the bulb. A car headlamp has about 4A of current passing through it while a small torch uses about 0.2A.
VOLTAGE
When several cells have been joined together, they form a battery. Every cell has a voltage, commonly referred to as potential difference (p.d). This potential difference (p.d) causes the flow of electrons (charges) in a circuit.E.g. A dry cell has a voltage of 1.5v. This voltage is normally marked on the cell.
Voltage is measured by using a voltmeter. The SI unit for voltage is the volt (V). If each coulomb if charge is given 1 joule of potential energy, then the p.d across the terminals of a battery is 1 volt.
The p.d between the ends of a connecting wire is zero since there is almost no loss of potential energy over this section.
P.d across the battery = sum of p.d around a conducting path, whereas voltage provides the driving force to an electric current, this force is always opposed.
RESISTANCE
Is the opposition flow to an electric current. As current flows through the circuit it encounters some opposing force. This force determines the amount of current flowing in an electric device.
The property of conductors that oppose the flow of electric charges depends on the relationship between current and voltage across their ends as discovered by George Ohm. He observed that voltage across a conductor was directly proportional to electric current flowing through it provided that temperature and other physical conditions of the conductor were kept constant.
Hence, V x I
V= IR
R is the constant of proportionality. This constant is called resistance and the above relationship is known as Ohms law.
Resistant (R) = p.d across the conductor/Current through the conductor
Therefore a resistance of 1ohm is obtained when a p.d of 11V cause a current of 1A to flow in a circuit.
A resistor
Is a device especially designed to offer resistance to the flow of an electric current, Resistors include rheostats (variable resistor) and fixed resistors.
Ohm's Law
Ohms law states, “At constant temperature and other physical factors, the potential difference across the end is directly proportional to the current passing through a conductor (wire).”
A graphical representation of Ohm's law. The graph of voltage against current

Connecting Simple Electric Circuits
Connect simple electric circuits
CONSTRUCTION OF SIMPLE ELECTRIC CIRCUITS
Consider a circuit consisting of a battery, a switch and 2 bulbs.
When the switch is closed, current flows through the wires and the bulbs light up. The circuit is said to be complete. When the switch is opened, no current flows through the wire, as the path carrying current is broken. The circuit is said to be incomplete.

If we want to be able to control the brightness of the lamp, we include a rheostat into the circuit.
In a circuit an ammeter is always connected in series with the battery. Current has to pass through the ammeter if it is to be measured correctly.

Unlike an ammeter, a voltmeter must be connected in parallel with component so as to measure the voltage drop across it. The figures show a simple electric circuit in which the ammeter and voltmeter are connected in series and parallel respectively.
As already learnt, resistance is the ratio of the potential difference across the ends of the conductor,a very good conductor will have 0 resistance.

Resistance of resistor R could be calculated using the formula:- R = V/I
R = V/I
Not that the rheostat (variable resistor) moves, it varies with the length of the conductor being used.
Example 1
A battery of 5V has a resistance wire of 20Ω connected to it. Calculate the current in the circuit.
Solution;
I = V/R = 5V/20Ω
I = 0.25A
Therefore,
Current in the circuit = 0.25A
Example 2
Calculate the reading of the Voltmeter P and the ammeter Q in the electric circuit below.
Solution:

Galvanometer in series
Galvanometer can only measure very small current of a few hundred microamperes. To measure large currents a resistor is added to make current flow through it and a very small amount of current flows to the galvanometer. This combination is called an ammeter.
On the other hand voltage is measured depending on the amount of current passing through the circuit. In Ohmic device it is given as V^I.

Simple Electric Circuits
Analyse simple electric circuits
Combination of resistors
There are two main methods of connecting circuit components, in series or in parallel. Resistors can be connected either in series or in parallel depending on the desired output.
Series combination
In series arrangement the resistors are connected end to end.
In a simple circuit
V = V1 + V2 or V- (V1 + v2)= 0
This means that the sum of the p.d across the resistors is the same as the p.d across the battery.
Current is the same at all points around the circuit.
Resistors connected in series

Parallel combination
Resistors are connected across two common points in a parallel arrangement.
Note; Potential difference is from a single source and so is the same for all the branches. However the current is different in each branch.

When bulbs have to be powered by a single source of electric current, the bulbs are connected in parallel. This is practiced in car and home lighting system.
The advantage of parallel arrangement over series arrangement is that:
Example 3
consider the figure below:
Given that the p.d a cross the cell is 24V, calculate the p.d across the 4Ω and 6Ω.