Concept of Static Electricity
The Concept of Static Electricity
Explain the concept of static electricity
Static electricity refers to the accumulation of electric charges on the surface of an object. These charges are in a stationary state (at rest). The study of electric chargers at rest is known as electrostatics. It studies about the charges at stationary state. These charges can be moved away from the object y means of electric current when connected to the circuit.
The Orign of Charges
Explain the origin of charges
The knowledge of static electricity came as early as the 6th century BC (600 BC). It was first discovered by the Greek ancients who rubbed amber and observed that it was able to carry attract dusts and leaves. During those times they believed that there are charges which make two things repel or attract each other.
Therefore, people knew about charges as result of rubbing process between two objects or materials.
When a piece of amber, plastic, polythene, or hard rubber is rubbed with fur, electrons are transferred from fur to the other material. Fur acquires net positive charge, since it has fewer electrons than protons. Similarly, the amber, plastic, or hard rubber acquires a net negative charge since they have excess electrons.
Combing hair charges the plastic comb by transferring charges from hair onto it. If placed near small pieces of paper, the plastic comb will attract the pieces of paper. This is because the comb has been charge with negative charges.
Rubbing glass (perspex) with silk causes the glass to acquire a net positive charge.
The two Types of Charges
Identify the two types of charges
There are two types of charges; -
Identification of charge
Suspend a polythene rod A rubbed with fur. Bring another polythene rod B rubbed with fur up to the rod A. Take a plastic rod and rub it with fur. Bring the plastic rod to up to the suspended rod A. Repeat the exercise with acetate and glass rod rubbed with silk cloth.
Observation
An electrified polythene rod repels another electrified polythene rod. An acetate rod rubbed with silk repels another acetate rod rubbed with silk cloth but it attracts a plastic rod rubbed with fur.
Explanations
Polythene and plastic when rubbed with fur becomes electrified with the same kind of electricity known as negative electricity (charge).
Acetate and glass when rubbed with silk cloth becomes electrified with the same kind of electricity called positive electricity(charge).
Charging is the process of electrifying a body.
A positively charged body carries positive charges and a negatively charged body carries negative charges.The symbols used for positive and negative charges are + and – respectively.
The Fundamental Law of Static Electricity
State the fundamental law of static electricity
The Fundamental law of electrostatic charges states that:“Like charges repel each other while unlike charges attract each other”
That means, a positive charge will attract a negative charge but two positive charges or two negative charges cannot attract rather repel.

Note:It is only the electrons in matter which can be transferred by rubbing.
Charging by induction
A charged polythene rod is held near uncharged copper rod suspended from a cotton thread.

As they received the same kind of charge, the leaves repel each other and thus spread apart, this is charging by contact.
If you touch the brass cap with your finger, the charge is transferred through your body to the earth and the leaves of the electroscope then collapse together.
Function of an electroscope
The Sign of Charges
Determine the sign of charges
The true sign on a body has to be determined before use; the instrument that can be used to determine the presence of charge is called an electrophorus.
An electrophorus consists of a circular slab of insulating material (polythene) together with a brass disc (conductor) on an insulating handle.
An electrophorus works by electrostatic insulation and hence can be used to generate positive charges from single negative charges. The charge produced on the insulating slab is negative. The top disc is then placed on it. Since the surface is only in contact at relatively few points, a positive charge is induced on the lower surface and corresponding negative charge is produced on its top surface.

The top of the upper disc is then touched briefly using a finger, hereby carrying away the negative charge to the earth; this is called EARTHING.

Steps of Charging and Discharging of a Gold-leaf Electroscope
Identify steps of charging and discharging of a gold-leaf electroscope
The polythene slab is charged negative by rubbing it with fur. The brass disc is then placed on top of the slab so that the two charges become induced onto respective materials.
Note:Contact does not negatively charge the disc because it is not flat and makes contact with the slab at a few points only. When the brass disc is touched with a finger, electrons on the upper surface are repelled to the earth.
There is a force of attraction between the metal disc and the base. A spark (electric energy) is normally produced upon their separation. This spark can be used for lighting gas burners in laboratory.
The electrophorus can now be used to charge a gold leaf electroscope.

By induction
Induction- is the transfer of opposite effects from one body to another without contact.
In order to obtain a charge of a given sign, the inducing charge must be of an opposite charge. If charge is placed on an insulator at a given location the excess charge will remain at the initial location. The particles of the insulator do not permit the free flow of electrons. Charge present in an insulator or conductor.

Conductors and Insulators
Difference between a Conductor and Insulator
Distinguish between a conductor and insulator
Conductors
Are bodies, which readily allow electric charge in motion to flow through them
OR
Are materials that permit some electrons to flow freely from atom to atom within the materials examples are copper, steel, iron, silver and gold.
When there is excess of positive or negative charge on an object made of a conducting material, the conduction electrons will move to minimise the repulsive force.
Insulators
These are bodies, which do not allow electric charges to flow through it. Insulators on the other hand do not allow their electrons to flow freely from at atom to atom; this is because the electrons in their atoms move around their nuclei in various equal magnitudes to the charge on the protons. The electrons are also firmly attracted to the nucleus hence bound to these atoms.


Capacitors
Capacitor is a device which is used for the storage of charges consisting of two conductors, parallel-nearly separated by air or any other dielectric. Dielectric is an insulating medium used between plates of a capacitor.
Mode of Action of a Capacitance
Explain mode of action of a capacitance
The capacitor store energy by keeping electrical charges on its plates. Capacitors are used in radio circuits, television circuits and other electronic devices.
When the power switches off, the energy stored in the plates of the capacitor will be released to flow in the circuit for sometimes. This will keep the device functioning until all the energy is worn out.
That means, when the electric power is available, the capacitor is charged and store electric energy on its plates but when the power in the circuit switches OFF, the capacitor continues to supply the electrical power in the circuit. This process through which the capacitor releases its charges to the circuit is known as discharging.
The Action of a Capacitor
Explain the action of a capacitor
A fully charged capacitor has a net positive charge on one of its plates and a net negative charge on the other plate. The potential difference between its plates can be measured by connecting the voltmeter across its plates.
The ability of a capacitor to store charges is known as the capacitance. Capacitance is the ratio between the quantity of charge stored and the potential difference (p.d) across the plates of the capacitor.

That means, the quantity of charges Q increases with the increase in the potential difference (p.d) across the plates.
The S.I unit of capacitance is is Farads (F). Other units include microfarads (µF), picofarads (Pf) and nanoFarads (nF).
A farad is the capacitance of a conductor that its potential difference can be changed by 1 volt by a charge of 1 coulomb.
However, 1 Farad capacitance is very large to be reached thus most of the times the smaller units are used to simplify measurements.

Example 1
A 3µF capacitor has a 18V of potential difference. What will be its total charge?

Example 2
Calculate the capacitance of the capacitor if the cell connected to it has 1.5V when the charge is 120 coulombs.

Construction of an Air-filled Capacitor
Describe the construction of an air-filled capacitor
This constitute two parallel metal plates with air band between them.A flat metal A is set up vertically on insulating legs and is connected to a gold leaf electroscope by means of a wire.
The plate is then given a positive charge by induction with a negatively charged ebonite rod. The divergence of the leaf indicates the potential of the plate.A second insulated plate B is now brought up slowly into a position parallel to A.
When B is very close to A but not touching it, it will be noticed that the leaf divergence decreases very slightly.We conclude from this that the potential of A has been decreased by the presence of B, and hence its capacitance has increased slightly. 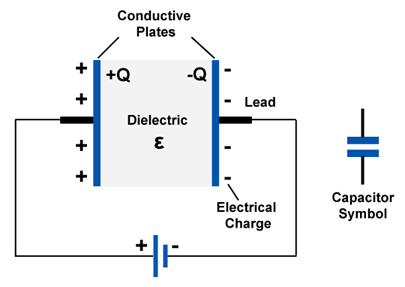 When capacitors are in series, charge distribution Q is equal to all capacitors but p.d, V and capacitance are different.
Therefore, the total p.d, VT 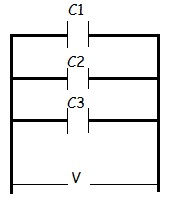 When capacitors are in parallel, potential difference V is equal to all capacitors but charge distribution, Q and capacitance are different.
Therefore, the total charge, QT

Where by, CT is the equivalent capacitance (combined capacitance) for capacitors in parallel.

Excess charge on a nonuniform conductor becomes most concentrated at the location of greatest curvature. (a) The forces between identical pairs of charges at either end of the conductor are identical, but the components of the forces parallel to the surface are different. It isF∥that moves the charges apart once they have reached the surface. (b)F∥is smallest at the more pointed end, the charges are left closer together, producing the electric field shown. (c) An uncharged conductor in an originally uniform electric field is polarized, with the most concentrated charge at its most pointed end. 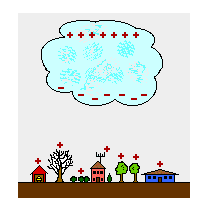 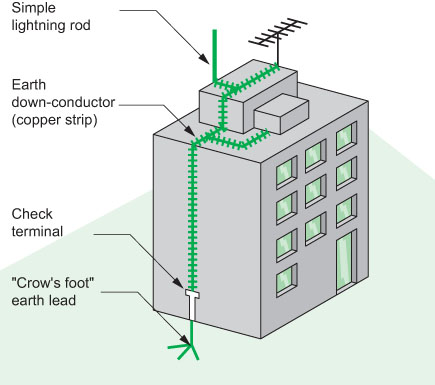