PHYSICS: FORM ONE: Topic 5 - ARCHIMEDES' PRINCIPLE AND LAW OF FLOTATION 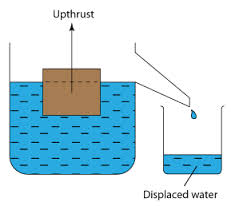 
Archimedes' Principle
Archimedes' principle indicates that the upward buoyant force that is exerted on a body immersed in a fluid, whether fully or partially submerged, is equal to the weight of the fluid that the body displaces.
The Concept of Upthrust
Explain the concept of upthrust
If a heavy object is lifted while immersed in water, it may be raised more easily than when outside the water. This is due to the reason that when anything is placed in liquid, it receives an upward force called upthrust. A body appears to have lost some weight when immersed in water due to the upthrust exerted on the body by the water.
From this experiment, it will be observed that W1>W2. This is because: 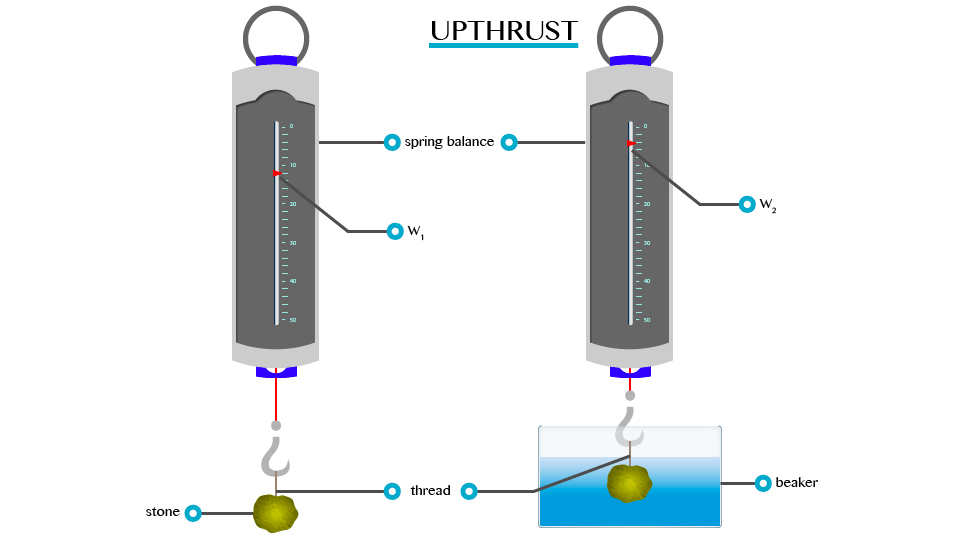 When a body is partially or totally immersed in any liquid, the liquid exerts an upward force.
A weight recorded on the spring balance of a body that is totally or partially immersed in any liquid is called apparent weight. E.g. W2 and the force, which temporally reduces the weight of the body, are called upthrust (u).
Verification of the Archimedes' Principle
Verify the archimedes principle
The Archimedes’ principle describes about two important things.
The forces acting on a body in air and when immersed in a liquid can be shown in following diagrams; 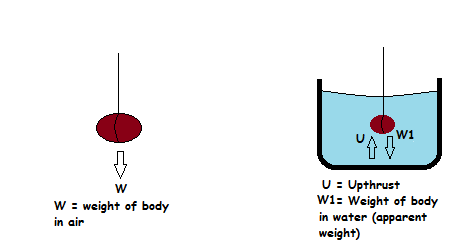 This apparent loss in weight (W2) is equal to the weight of the liquid which is displaced after immersing the body.

Hence it can be shown that,

Example 3
A piece of glass weigh 1.2N in air and 0.7N when completely immersed water. Calculate its:
Given that density of water = 1000kg/cm3
And acceleration due to gravity = 10N/kg
Solution
Weight of the glass in air (W1) = 1.2N
Weight of the glass in water (W2) = 0.7N
R.D = W1/W1 – W2
1.2N/(1.2 – 0.7)
1.2/0.5
R.D = 2.4
R.D = Density of glass/Density of water
Density of a glass = R.D x Density of water
= 2.4 x 1000kg/cm
= 2400kg/m3
NB: Relative density has no SI unit
Law of Flotation
Difference between Floating and Sinking of Objects
Distinguish floating and sinking of objects
As we have discussed in upthrust, different objects with different density can sink or float. The object with higher density than water density will sink while that object with a density lower than water’s density will float. For example, a coin sinks in water and a large ship floats on water.
A bowl placed on the surface of water will stay on the surface or on top of water. 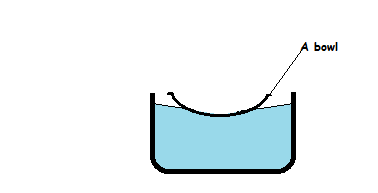 This tendency of the body to remain on the surface of the fluid is known as floating.
On the other hand, a metal block such as steel block when placed on water will descend to the bottom of the container.

This tendency of an object to drop to the bottom of the liquid is known sinking.
The following table shows differences between floating and sinking 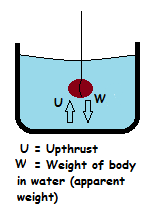 The following conditions can be used to determine the position of the object in the fluid.
The buoyant force(upthrust) depends on the volume of the object and the density of the surrounding fluid.
For example;
The following are the conditions for the body to float in fluid;
Relationship between Upthrust and Weight of Floating Body
Relate upthrust and weight of floating body
Upthrust and flotation are well related through the density of the object and the density of the surrounding fluid. For the body to float in the fluid, the upthrust must be controlled. Upthrust is controlled by controlling the density of the object and the density of the surrounding fluid.
The object will float if the density of the body is less than the density of the fluid.
The density of the object is decreased by increasing the volume of the object.
However, when a body floats, its weight decreases to zero (weightless). That is why it is very easy to lift or move the object when it is floating in the fluid.
Principle of Floatation
State the law of flotation
The above experiment shows that, the upthrust is equal to the weight of the liquid displaced and therefore the upthrust is equal to the weight of the floating body as the two forces are equal.
The mass of the floating body is equal to the mass of fluid displaced; in the above experiment is the same as the weight of the piece of wood. This result is agreement with the principle of floatation.
The principle of floatation states “A floating body displaces a weight of the fluid which is equal to its own weight.”
The Law of Floatation in Everyday Life
Apply the law of flotation in everyday life
Floating of ship
Iron is much denser than water and a block of iron sinks immediately in water. Ships are made with hollowness such that their total densities are less than that of water. Therefore, a ship displaces water equal to its weights.
The upthrust of the water is sufficient to support the weight of the ship. When the ship is loaded with cargo it sinks lower in the water. The volume of water displaced by the ship and its cargo depends upon whether it is floating in fresh water or in seawater. It floats lower in fresh water (R.D= 1.0) than in seawater (R.D=1.025) the mass of fresh water displaced.
For example, if a ship weighs 20,000 tons, then it must displace 20,000 tones of water to float. If 2,000 tones of cargo is added, the ship lowers in water until an extra 1,000 tons of water have been displaced
Plimsoll line;This line indicates the safe limit of loading. Many plimsoll lines may be marked on a ship to show minimum heights above different types of water in different seasons. 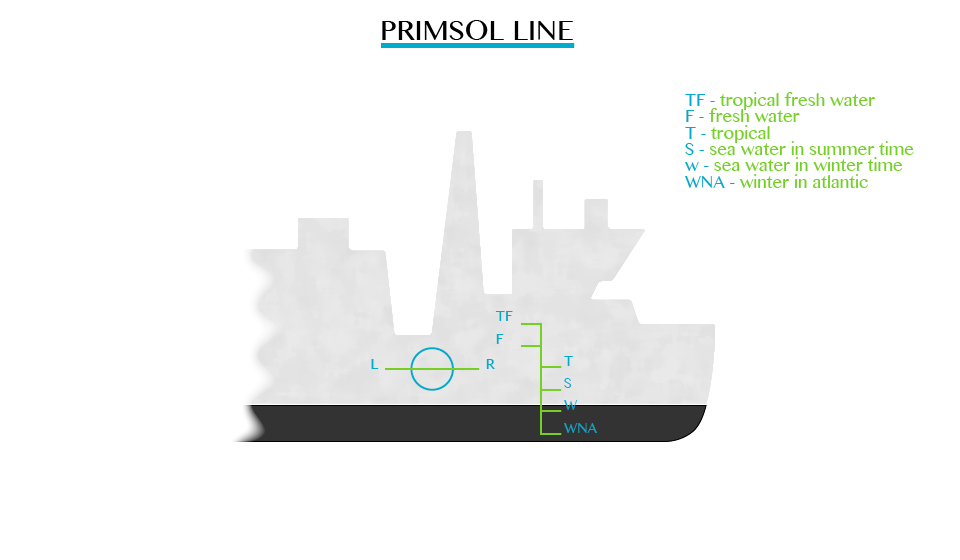 Balloons
Figure below shows the type of balloons used to carry instruments to a high altitude for recording meteorological measurements when filled with gas. E.g. helium, it displaces a volume of air equal to its volume.
Air has greater density compared to the density of a gas in the balloon. Therefore, the weight of air displaced is greater than that of balloon. The balloon drifts up by a force, which is equal to the difference between the upthrust and the total weight of the balloon (W).
Submarine
The buoyancy of a submarine depends on the quantity of water in its ballast tanks. When it is required to drive, water is admitted to special tanks. When the water is ejected from the tanks by means of compressed air, the submarine raises to the surface and floats just like any other ship.
The mode of Action of a Hydrometer
Describe the mode of action of a Hydrometer
A hydrometer is an instrument used for measuring the densities of liquids such as milk, alcohol and acids. The greater the density of the liquid the shorter the stem of hydrometer immersed. Hydrometer sinks lower in kerosene and floats higher in water.
Construction of a Simple Hydrometer
Construct a simple Hydrometer
Single hydrometer can be made using pieces of straws or test tubes weighed down with wax. 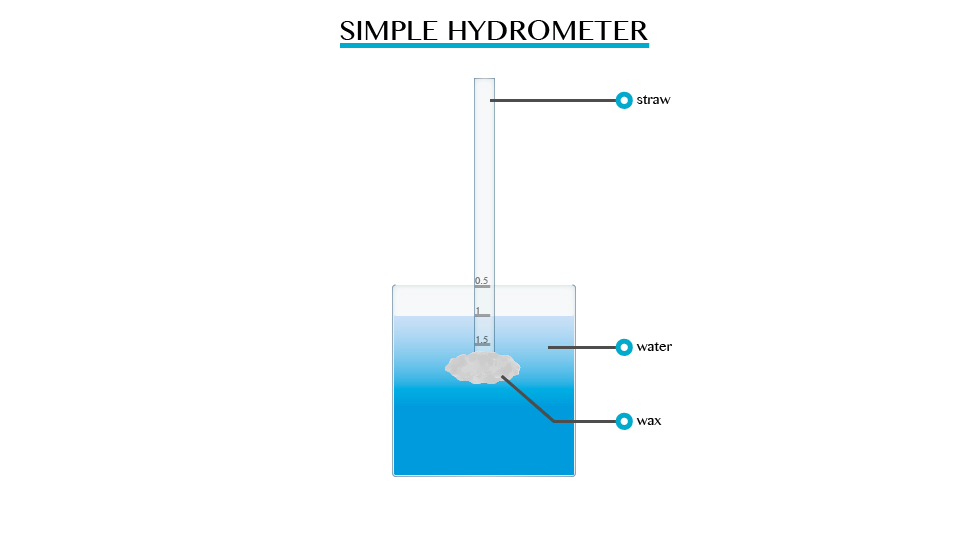