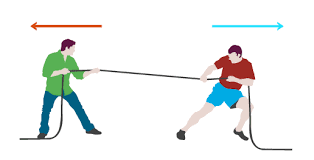 TOPIC 4: FORCE
A force is an interaction that causes a change. In mechanics, a force is an interaction that causes a change in velocity (an interaction that causes acceleration).
Concept of Force
The Concept of Force
Explain the concept of force
For better understanding of this concept, let’s ask ourselves the following question:
The answers to these questions, is of course that a force is required to do so. Here, an applied force to a body can cause the body at rest to move or if already moving a body application of force can do the following when applied to a body.
A force is defined as a push or pull experienced by an object. The force is usually described in terms of its size (magnitude) and direction.
The S.I Unit of Force
State the S.I unit of force
The SI unit of force is Newton (N).
A Newton (1N) can be defined as the amount of force required to give a mass of one kilogram (1kg) an acceleration of 1m/s2.
Measuring Instrument (Device)
The instrument that is used to measure the amount of force that is exerted on an object is called spring balance.
A spring balance can be used to measure small forces. It consists of a coiled spring fixed to the other end with a hook at the other end. The body upon which the force acts is attached to the hook. The distance through which the spring is stretched is directly proportional to the force applied by the balance.
A pointer is attached to the spring and the force is indicated on a calibrated scale. 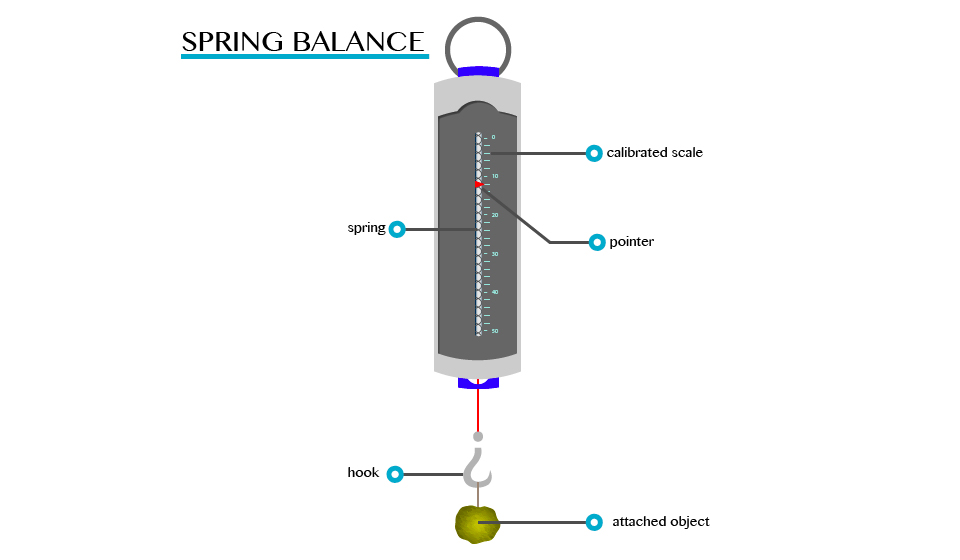 Types of Force
Fundamental Types of Forces
Identify fundamental types of forces
There are two main types of forces namely:
Fundamental Forces
Fundamental forces are the basic forces in nature that cannot be explained by the action of another force.
There are four types of fundamental forces. These include:
Force of gravity (weight)
The force of gravity is the pull by which the earth, moon and other very large bodies attract other objects towards themselves. It is commonly referred to as the weight of the object that is attracted.
All objects on the earth experience a force of gravity that is directed downwards towards centre of the earth. The earth’s gravitational pull is so great that it is able to hold most things firmly on the ground.
In mechanics, a freely falling body in the air moves down irrespective of its mass. This is due to force of gravity.
Example 1
A fruit fall from a tree because the earth exerts gravitational force on it. The force of gravity on the earth is always equal to the weight of the object (body).
Force of gravity, W = mass (m) x gravitational acceleration (g).
W= mg
Where acceleration due to gravity on the earth, g = 9.8m/s2
Conclusion, we can say that the force of gravity has the following properties.
NB: It should be noted that the weight of an object is directly related to its Mass.
Weight, W = mass x g = mg
The g above has two meanings:
Electromagnetic force
This force includes both electric and magnetic force. It is relatively strong.
Example 2
Examples where electromagnetic forces are involved include:
Strong nuclear force
This is the force, which holds of the constitutions (sub atomic particles) of the atomic nucleus. It acts within the nucleus of the atom.
Weak nuclear force
This is the force which appears only in certain nuclear processes.
The Properties of Each Type of Fundamental Forces
Describe the properties of each type of the fundamental forces
Properties of gravitational forces
The following are the properties of gravitational force
Properties of electromagnetic force include
Properties of a strong nuclear force:
Properties of the weak nuclear force


Effects of Force
The Effects of Forces
Identify effects of forces
A force acting on an object may cause the object to change shape, to start moving, to stop moving, to accelerate or decelerate.
When two objects interact with each other they exert a force on each other, the forces are equal in size but opposite in direction.
Resultant force
The forces acting on an object can be replaced with a single force that causes the object to behave in the same way as all the separate forces acting together did, this one overall force is called the resultant force. 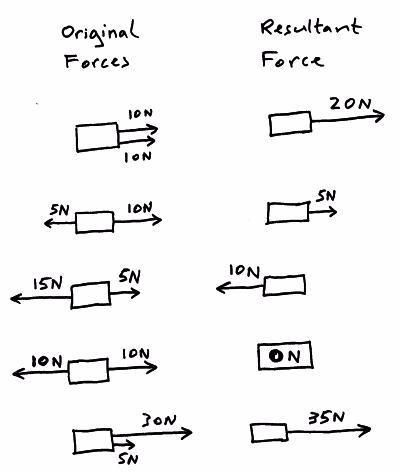