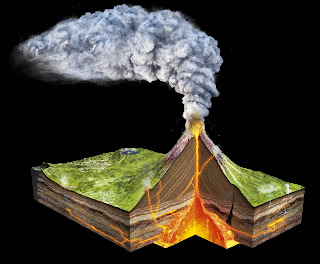 TOPIC 7: GEOPHYSICS
Geophysics is a branch of science that deals with the physical, chemical, geological, astronomical and other characteristic properties of the earth.It deals with geological phenomena such as the temperature distribution of the earth’s interior, the source, configuration and the geomagnetic field.
Structure and Composition of the Earth
The Structure of the Earth
Describe the structure of the earth
The structure of the earth is composed of three major zones arranged in concentric manner. These are crust, mantle and core.
The crust
Is the outer solid layer o the earth.It is extremely thin(5 to 15km) compared to the radius of the earth (6,371km).There are two types of crust, namely:
The mantle
It begins from the Moho and extends to a depth of 2,900km below the earth’s surface,up to its boundary with the earth’s core.This boundary is called the Gutenberg discontinuity.
The mantle contains about 70% of the earth’s mass.It is composed of rocks,both in solid and mountain states.The upper surface of the mantle has the temperature of about 870°C,and this temperature increases downwards through the mantle to about 2,200°C near the core.
The core
Is the innermost part of the earth.It extends from the Gutenberg discontinuity to the earth’s geometric centre. The core consists of two distinct regions namely:
Activity 1
In groups of five, discuss why the outer core is liquid while the inner core is solid.


Earthquake and Volcanoes
Both of them, volcano and earthquake are caused by the movement of molten rock and heat deep inside the earth. These movements are referred to as subterranean movements. Most earthquakes and volcanic activity happen near tectonic boundaries.
The Origin of Volcanoes
Explain the origin of volcanoes
Volcanoes are places where molten rock called magma leaks out through a hole or a crack in the earth’s crust.Magma originates from the mantle,where high temperature and pressure cause the rock to melt.When a large pool of magma if formed,it rises through the denser rock layer towards the earth’s surface.
Magma that has reached the earth’s surface is called lava. Most volcanoes form along constructive and destructive boundaries between tectonic plates.However a few form plate boundaries.
Types of volcanoes
There are two main types of volcanoes, namely:
Classification of volcanoes
Volcanoes are classified into three categories based on their frequency of eruption, namely:

The Origin of Earthquake
Explain the origin of earthquake
An earthquake is a sudden motion or shaking of the earth caused by a sudden relese of energy that has accumulated within or along the edges of the earth’s tectonic plates.
Earthquakes happen when rocks in the earth’s crust move suddenly, shaking the earth.Earthquake also occur as a result of movement of magma at constructive boundaries under volcanoes and where continental plates collide and push mountain ranges.
How earthquake occur
Earthquakes mostly occur on or near the boundaries between tectonic plates.However ,earthquakes can also occur far from plate boundaries. Such earthquakes probably occur as a result of faults formed millions of years ago.
Pressure liquid builds between them until the friction force holding the plates together gives way.The plates move suddenly,releasing the pressure or energy and then holds together again. This sudden jerk is what is felt as an earthquake.
The point within the earth where an earthquake begins is called the hypocenter or the focus of the earthquake. Earthquake rarely occur along constructive plate boundaries.
Seismic waves
This refers to the energy released by an earthquake. They are grouped into three categories:
There are two types of surface waves:

The Principle of Measurement
Describe the principle of measurement of earthquake
The nature of an earthquake is usually described by measuring two properties, namely the magnitude and intensity.
The magnitude of an earthquake is a measure of the energy it releases. It is usually measured on the Richter scale.
The Richter scale magnitudes are based on a logarithmic scale(base 10).The intensity of an earthquake is a measure of its strength based on the changes it causes to the landscape.The intensity is usually measured on the Modified Mercalli scale.The scale is calibrated 1 to 12.
Note:An earthquake can have only one magnitude. However its intensity reduces as the seismic waves spread out from the hypocentre,just the same way the loudness of a sound changes as you move away from the source.
The Seismograph:Is an instrument used to record ground movements caused by earthquakes. It measures ground oscillations by recording the relative motion between a pendulum and the ground. It is also possible to use the ratio between the deflection and the of the pendulum and the acceleration of the of the ground to record an earthquake.


Structure and Composition of the Atmosphere
The Vertical Structure of the Atmosphere
Describe the vertical structure of the atmosphere
The atmosphere is a layer of gases containing numerous small suspended solid and liquid particles surrounding the earth.It has no outer boundary,it just fades into space.The dense part of the atmosphere lies within 30km above the earth’s surface.
The atmosphere is divided into regions based on its thermal characterestics (temperature changes),chemical composition, movement and density. It is divided into five regions, which are:

The Composition of the Atmosphere
Describe the composition of the atmosphere
Troposphere
This is the region nearest to the earth’s surface which extends to an altitude up to 10 km above the poles and 20km above the equator.It is the most dense part of the atmosphere(80% by mass of the atmosphere) which contains most of the atmosphere's water vapour.
The temperature in this region decreases with altitude at an average rate of 6°C/km.It encourages the change of weather(most of weather phenomenon occur in the troposphere).Clouds and rain are formed within this region.
The boundary which separates the tropospher from the the stratosphere is called the tropopause. At the tropopause,the temperature stop decreasing with altitude and becomes constant. The tropopause has an average height of about 10km.
Stratosphere
It starts from the tropopause and extends to 50km high.It is more stable,drier and less dense compared to troposphere.
The temperature slowly increases with altitude due to the presence of ozone layer which absorbs ultraviolet rays from the sun. The ozone layer lies in the middle of the stratosphere between 20 and 30km. Ozone is triatomic(three-molecules) form of oxygen.
The stratosphere together with with troposphere are collectively known as the lower atmosphere.The boundary which separates the stratosphere from the outer layer is called the stratopause.
Advantages of stratosphere
It absorbs the ultraviolet radiations which would otherwise reach the earth’s surface which is harmful to both plants and animals.
It prevents large storms from extending much beyond the troposphere due to its stability. Planes also fly within this layer because it has strong steady horizontal winds which are above the stormy weather of the troposphere.
Mesosphere
It starts just above the stratosphere and extends to 85km high.The temperature at this layer decreases with altitude.The lowest temperature of the atmosphere occurs within this region(-90°C).
Is the layer where most meteors burn while entering the earth’s atmosphere.The boundary which separates the mesosphere from the thermosphere is called the mesopause.
Thermosphere
It is just above the mesopause and extends up to 690km high. The temperature increases with altitude due to the sun’s heat.The temperature in this region can go as high as1727°C and chemical reactions occur faster in this region than on the earth’s surface.
This layer is also known as the upper atmosphere. The lower part of the thermosphere,from 80 to 550km above the earth’s surface, contains the ionosphere. This is a region containing a high concentration of charged particles called ions and free electrons.
Importance of ionosphere
The large number of free electrons in the ionosphere allows the propagation of electromagnetic waves. It absorbs the dangerous radiations like X-rays and extreme ultraviolet(EUV) radiation. It plays an important role in communition of radio waves.
Exosphere
Is the outermost region of the atmosphere.In this region,the atmospheric gas pressure is very low such that light atoms such as hydrogen and helium may acquire sufficient energy to escape the earth’s gravitational pull.
The upper part of the exosphere is called magnetosphere.The motion of ions in this region is strongly constrained by the presence of the earth’s magnetic field.This is the region where satellites orbit the earth.