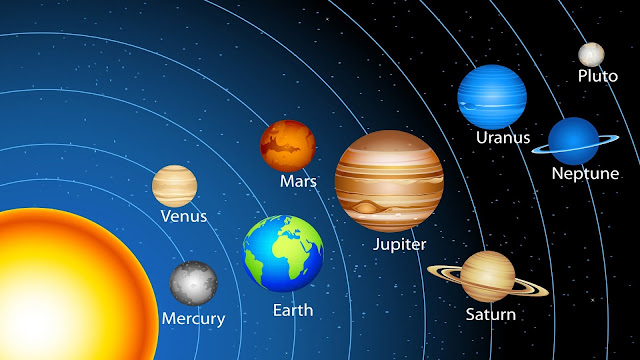 
Introduction to Astronomy
The Concept of Astronomy
Explain the concept of astronomy
Astronomy is a branch of science which deals with the study of origin, evolution, composition, distance and the motion of all bodies and scattered matter in the universe.
The Importance of Astronomy in Everyday Life
Explain the importance of astronomy in everyday life
Importance of astronomy include:
Solar System
Difference between a Star and a Planet
Distinguish between a star and a planet
The solar system is made up of the sun and the celestial objects bound to it by gravity.These objects include the eight planets and their known moons and billions of small bodies that include asteroids,comets,meteoroids and interplanetary dust.
Stars and planets
A star is a large celestial body made up of hot gases known as plasma which are held together by own gravity.
Plasma is an ionized gas in which a certain proportion of electrons are free rather than bound to an atom or molecule.
The sun is a large star. The sun is also the closest star to the earth. The distance between the earth and the sun is approximately 149.60 million kilometers.
A Galaxy is a giant collection of stars,gas and dust.
Most stars in the universe are in the galaxies. Nearly all of the stars visible in the night sky are within our own galaxy, sometimes called the Milky Way Galaxy.
Planet is a major (large) object which is in orbit around a star.There are eight planets which are Mercury, Venus, Earth, Mars, Jupiter, Saturn, Uranus, and Neptune.
Characteristics of a planet
Pluto is not considered as a planet because it resides in an area of space populated by numerous other objects.It is now designated a dwarf planet.The dwarf planet does not meet the third characteristic i.e has not cleared the neighbourhood around its orbit.
Differences between stars and planets
Asteroids (minor planets) are small solar system bodies in orbit around the sun,especially in the inner solar system.Asteroids are smaller than planets but larger than a speck of dust.
A comet is a solid body orbiting the sun typically composed of rock dust or ice. Most comets were formed from condensed interstellar gas and dust clouds in the early stages of the creation of the universe. 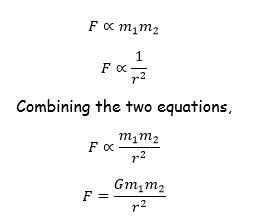 Two bodies attracting each other in the universe
Gravitation force is actually very weak force.The huge gravitational force of the nearest star,the sun,holds together the eight planets of the solar system. The planets move round the space at speeds that just balance the sun’s gravitational pull, so they are locked into a permanent path (orbit) around the sun.
Natural satellites (moons) orbits planets while artificial satellites orbit the earth in the same way as the moon orbits the planets.
Gravity is the gravitational force that occurs between the earth and the other objects.It pulls the objects towards the center of the earth.It holds us on the ground and causes objects to fall back to the ground after being thrown uo in the air.
The earth's gravitational pull extends out into space in all directions. The further you move away from the center of the earth,the weaker the force becomes. The measure of the force of gravity on an object on the earth’s surface is the weight of that object and is measured in newton (N).
The weight of an object changes depending on its location in the universe.


The Earth and the Moon
The Surface Features and Temperature of the Moon
Describe the surface features and temperature of the moon
The moon of the earth is the sixth largest in the solar system. It has a diameter of 3,476km and a mass of 7.35 x 10²²kg. Like the earth, the moon has an iron core surrounded by a rocky mantle and crust.Unlike the earth, no part of the moon’s iron core is molten so it does not have a magnetic field.Surface gravity on the moon is 1/6 that of the earth.
The moon revolves in a anticlockwise direction around the earth in an elliptical orbit. The moon’s orbit is tilted at 5° relative to the earth’s orbit around the sun.The distance between the earth and the moon varies from perigee (nearest the earth) where it is 356,000km to apogee (furthest from the earth) where it is 406,000km. The average distance is 384,000km.
It take the moon 27.3 earth days to complete one orbit, a period of time called the Sidereal month.The moon also rotates about its axis at a rate equal to its rate of revolution. The result of this is that one side of the moon face the earth. The side which faces the earth is called the near side while the side which faces away is called the far side.
The spinning of the earth causes the moon to rise and set each day ,just like the sun. However, because of moons’ orbital motion around the earth ,it(the moon) rises about 50 minutes later each day .As a result, the moon can be seen at different times of the day and night during a month.
The temperatures on the surface of the moon are on average 107°C during the day and 53°C during the night.
Surface features of the moon.
There are two primary types of terrain on the moon. These are;
From the surface of the earth,the moon’s surface appears to have bright and dark regions when viewed with the unaided eye.
The bright areas are the lunar highlands that have many craters and covered with a highly reflective layer of fine dust. The highlands are geologically the oldest parts of the moon’s surface.
The dark areas are low areas similar to ocean basins on the earth. They are with dark solidified lava and are less cratered than the highlands. Galileo called these areas matia, Italian word for seas, because their dark smooth surface appears to be large bodies of water.
The maria which makes 16% of the moon’s surface , are huge impact craters that were later flooded with molten lava. Most of the maria is covered with regolith,a mixture of fine dust and rocky debris produced by meteor impact.
The Causes of Ocean Tides
Explain the causes of ocean tides
Tides are periodic rises and falls of large bodies of water caused mainly by gravitational interaction between the earth and the moon.
The earth and the moon are attracted each other, just like magnets are attracted to each other. The moon rises to pull at anything on the earth to bring it closer. But the earth is able to hold onto everything except the water. Since the water always moving, the earth can't hold onto it and the moon is able to pull at it. This results into ocean tides.
Each day, there are two high tides and two low tides. The ocean constantly moves from high tide to low tide, and then back to high tide. There is a time interval of about 12 hours and 25 minutes between the two high tides.
How tides occur
Gravitational attraction of the moon causes the oceans to bulge out in the direction of the moon. Another bulge occurs on the opposite side since the earth is also being pulled towards the moon (and away from the water on the far side).
Ocean levels fluctuate daily as the sun, moon and earth interact .As the moon travels around the earth, and as they together travel around the sun, the combined gravitational forces cause the world ocean water levels to rise and fall. Since the earth is rotating while this is happening, two tides occur each day.
Types of tides
There are two types of tides:
Spring tides
They occur during the full moon and the new moon. During this time, the earth,the sun and the moon are in a line. The gravitational forces of the moon and the sun both contribute to the tides.
At these times, the high tides are very high and the low tides are very low. These are known as spring high tines and spring low tides respectively.
Spring tides are especially strong tides.Proxigen spring tide is a rare unusually high tide. It occurs when the moon is both unusually close to the earth (at its closest perigee, called the proxigee) and in the new moon phase(when the moon is between the earth and the sun).
The proxigen spring spring tide occurs at most once every 1.5 years.
Neap tide
When the sun and the moon are not aligned, the gravitational forces cancel each other out, and the tides are not very high or very low. These are called neap tides.
They occur during quarter moons. During this time, the gravitational forces of the moon and the sun are perpendicular to one another (with respect to the earth).
This causes the bulges to cancel each other. The result is a smaller difference between high and low tide and is known as a neap tide. Neap tides are especially weak tides.