MATHEMATICS: FORM THREE: Topic 7 - THE EARTH AS A SPHERE 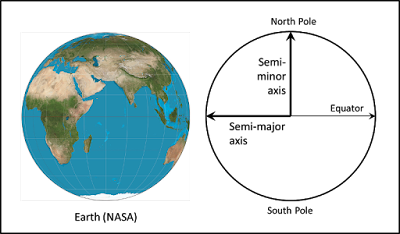 TOPIC 7: THE EARTH AS A SPHERE


Features and Location of Places
The Equator, Great Circle, Small Circles, Meridian, Latitudes and Longitudes
Describe the equator, great circle, small circles, meridian, latitudes and longitudes
Definition of latitude and longitude
The Earth is not a perfect sphere, as it is slightly flatter at the north and south poles than at the equator. But for most purposes we assume that it is a sphere.
The position of any point on earth is located by circles round the earth, as follows:
The earth rotates about its axis, which stretches from the north to the South Pole.
Circles round the Earth perpendicular to the axis are circles of Latitude and Circles round the Earth which go through the poles are circles of Longitude or meridians.
Consider the following diagram 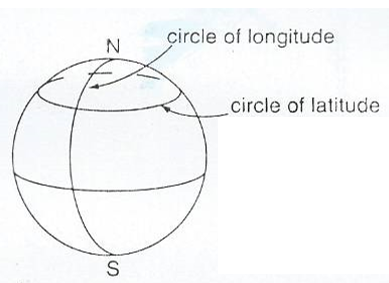 Normally Latitude is defined relative to the equator, which is the circle of latitude round the middle of the Earth while Longitude is defined relative to the circle of longitude which passes through Greenwich in London (Greenwich meridian).
The latitude of a position tells us how far north or south of the equator it is while the longitude of a position shows us how far east or west of the Greenwich meridian it is.
Latitude; If we draw a line from the centre of the Earth to any position P , then the angle between this line and the plane of the equator is the latitude of P. 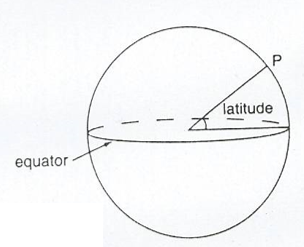 Longitude: This is the angle between the plane through the circle of any Longitude P and the plane of the Greenwich meridian . 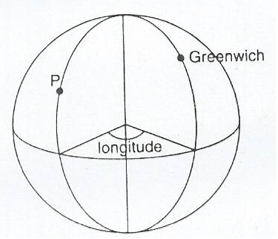 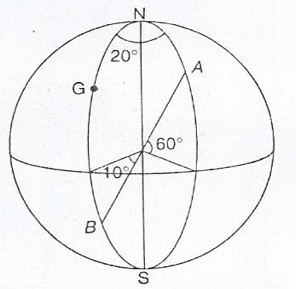 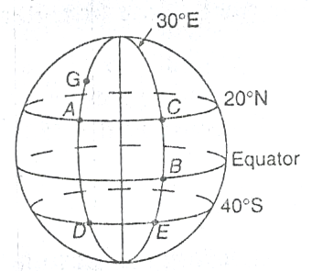 2. Copy the diagram show on the figure above and mark these points:
3. Obtain a globe, and on it identify the following places.


Difference between angles of latitude or longitude
Suppose two places have the same longitude but different latitudes. Then they are north and south of each other.
In finding the difference between the latitudes take account of whether they are on the same side of the equator or not.
Similarly, suppose two places have the same latitudes but different longitudes:
Suppose places A and B are on the same longitude, then the difference in latitude is the anglesubtended by AB at the centre of the earth. 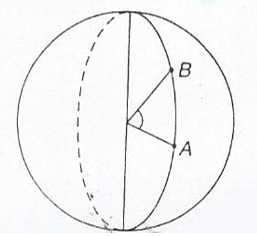 Suppose places A and B are on the same latitude.
Then the difference in longitude is the angle subtended by AB on the earth's axis. 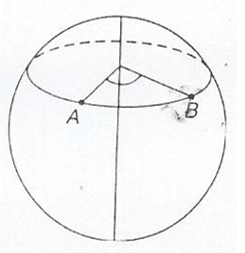 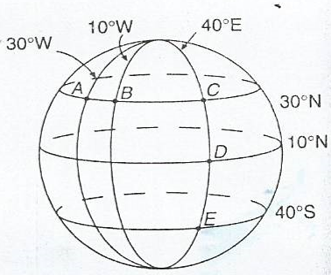 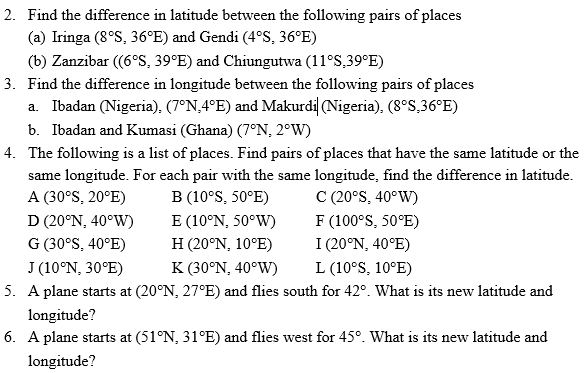 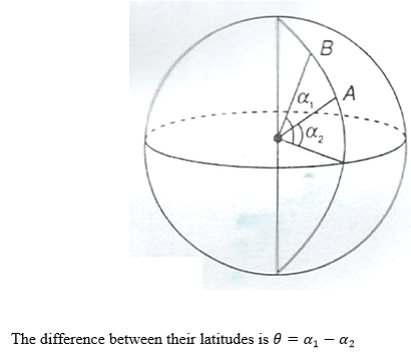 In the figure above, the sector containing the arc AB subtending∅, is shown.
Recall the formula for the length of arc. 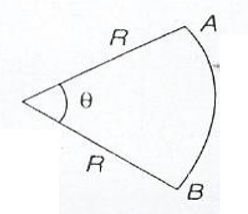 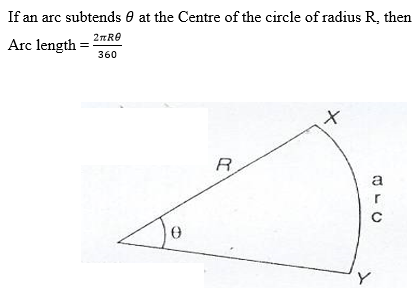 NB: Remember, to find the difference in latitudes, take account of whether the places are north or south of the equator. If they are all found in south or north, then subtract the latitudes. If one is south and the other North then add the latitudes.
Nautical miles 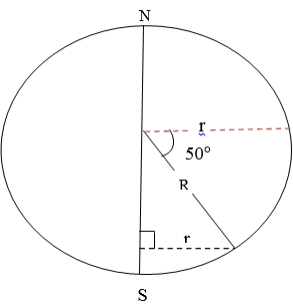 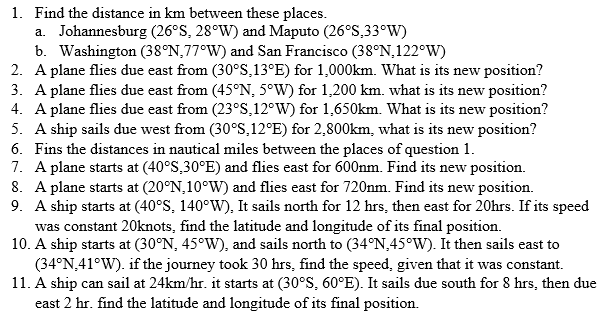 Navigation
Suppose a ship is sailing in a sea current, or that a plane is flying in a wind. Then the course set the ship or plane is not the direction that it will move in. the actual direction and speed can be found either by scale or by the use of Pythagoras’s theorem and trigonometry.
Draw the line representing the motion of the ship relative to the water. At the end of this line draw a line representing the current. Draw the third side of the triangle. This side, shown with a double – headed arrow, is the actual course of ship.
Example 11
A ship sets course due east. In still water the ship can sail at 15km/hr. There is a current following due south of 4kkm/hr. use a scale drawing to find.
Solution:
In one hour the ship sails 15km east relative to the water. Draw a horizontal line of length 15cm. In one hour the current pulls the ship 4km south. At the end of the horizontal line, draw a vertical line of length 4cm. 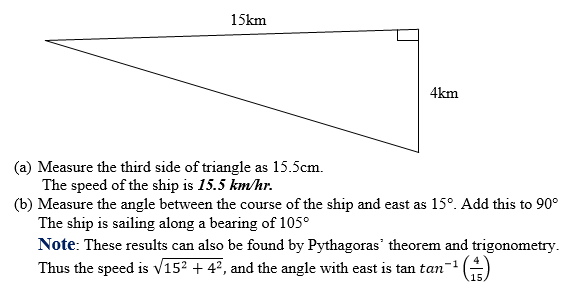 Example 12
The ship of example 10 needs to travel due east. Calculate the following.
Solution
The ship needs to set a course slightly north of east, consider the following diagram. 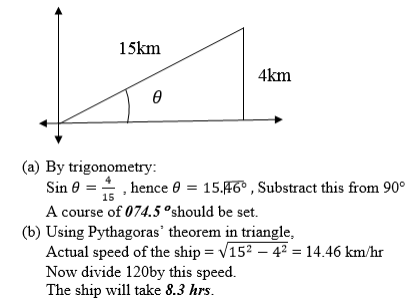 Note: With no current, the journey would take 8hrs. The journey takes slightly longer when there is a current.Suppose a ship or a plane does not directly reach a position. We can still find how close the ship or plane is to the position. 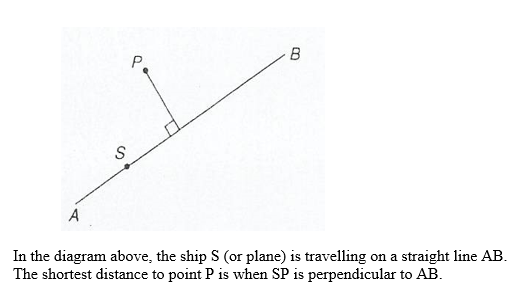 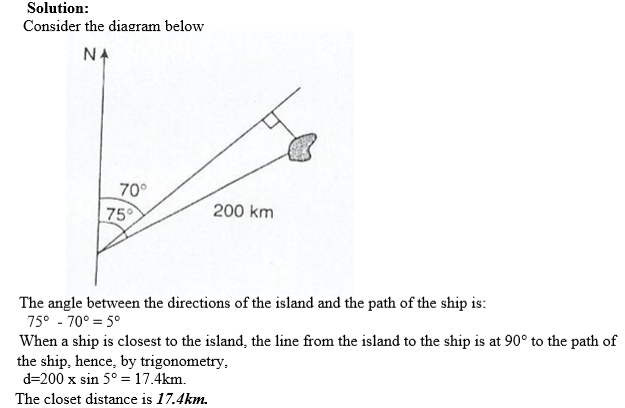