Home Commerce COMMERCE: FORM ONE: Topic 1 - THE SCOPE OF COMMERCE

COMMERCE: FORM ONE: Topic 1 - THE SCOPE OF COMMERCE 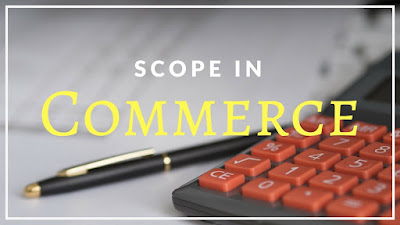 TOPIC 1: THE SCOPE OF COMMERCE


The Scope of Commerce
The Nature and the Subject Matter of Commerce
Explain the nature and the subject matter of commerce
THE MEANING OF COMMERCE
The scope of commerce implies the coverage of commerce, modern commerce has become so wide. It comprises of the study of all activities in the transfer (distribution) of goods and services from the producers to consumers. Activities like transportation, communication, insurance, banking and advertisement have played a huge role in development of commerce. Trade within the boundaries and across the nation's boundaries makes commerce to acquire international status. Example, a farmer as a producer needs to find people to buy his/her produce. Those buyers are called consumers. For those products to reach the final buyer( consumer), means of transport like roads, railways and airways need to be better.
Example of those activities include trade, transportation, banking, insurance and advertising.
Please use a regular YouTube link.
The study of commerce can help you to get the knowledge on three basic areas. In its broad sense commerce covers the following areas:-
COMMERCE is a branch of production which deals with the exchange of goods and services and all activities that facilitate the transfer of such goods and services from producer to final consumers. Exchange is an act of buying and selling. It is a major part of commerce.
Please use a regular YouTube link.
DIVISION OF COMMERCE
Commerce is divided into two branches, which are:
Commerce Flow Chart
Draw the commerce flow chart
Example 1
A commerce flow chart is used to show exactly what is covered in its scope. The study of commerce involves trade and aids to trade. That means, or a product to reach to the final buyer, a trader has to arrange on advertisement, transport and sometimes insurance. We can see in our chart that, trade can be done inside a country(home trade) or among countries(foreign trade). 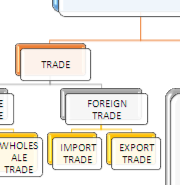 1).TRADE:
Refers to the process of buying and selling of goods and services, with the intention of generating profit. A person who engages in trading activities is known as a trader. The video below shows how students from one school were trying to figure out on why nations trade. They further explore on how and how countries specialize to produce the goods.
Please use a regular YouTube link.
Trade is sub divided into two main branches, which are: a) Home trade and b) Foreign trade.
A. HOME TRADE
This is the buying and selling of goods and services within in a country. Home trade is divided into two main branches;- Retail trade and Wholesale trade. The video below shows some of goods which were show in International Trade Exhibition which took place in Diamond Jubilee. It is very important for a country to trade its own produce. This help to reduce number of people who are jobless and to satisfy people's wants.
Retail trade: This is the buying of goods from producer or wholesalers and selling them to the final consumers. Retailer is a person who buys in small quantities from the wholesaler or producer and then sells it to the final consumer. Example in Tanzania, particular in Dar-es-Salaam, you can find more wholesalers in Kariakoo market. The retailers buys from Kariakoo and sell the goods to in the streets.
Wholesale trade: This is the buying of goods in large quantity from manufacturer or producers and selling them to other business men in smaller quantity at lower price. Wholesaler is a trader who buys in bulky (large quantities) from the producers and sells it in small quantities to the retailers or straight to the consumers.
I have summarized for you the differences between a wholesaler and a retailers below.
B.INTERNATIONAL TRADE (FOREIGN TRADE)
International trade-is a trade between one nation and other nations. It is the exchange of goods and services across the national borders. For example, exchanging the goods and services between Tanzania and China. In Tanzania, as a country we sell minerals and farm produce such as coffee abroad. In Tanzania, we do not produce cars, machinery and other equipment which require high technology, then we have to buy them from other countries. this is what is called an international trade. A trade between one nation and the other nation.With the improvement of transport and communication, countries are able to trade very efficiently. This is of very crucial value to countries economies because every nation benefit from it. 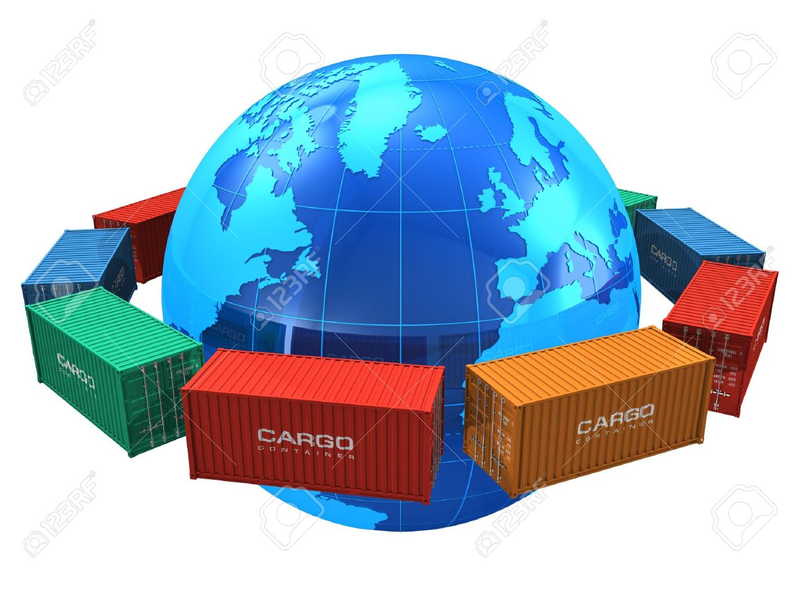 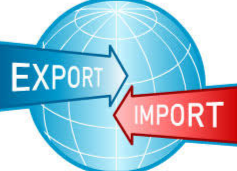 Export trade is the process of selling goods and services to other countries. For example, selling of Tanzania gold to China.
Import trade: is the process of buying goods and services from other countries. For example, buying of mobile phones from china and selling them locally in Tanzania.
2. AIDS TO TRADE
Aids to trade are all the activities which facilitate trade. Aids to trade make trade less difficult to carry out. Examples of aids to trade include the following:
WE ARE AIDS TO TRADE!YES WE MAKE IT HAPPEN VERY SMOOTHLY. 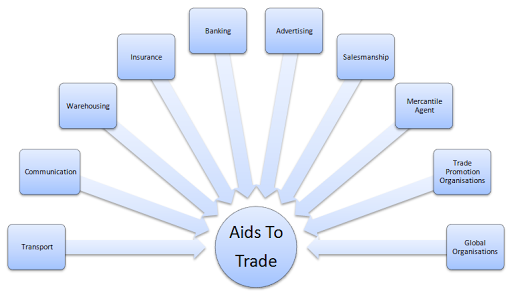 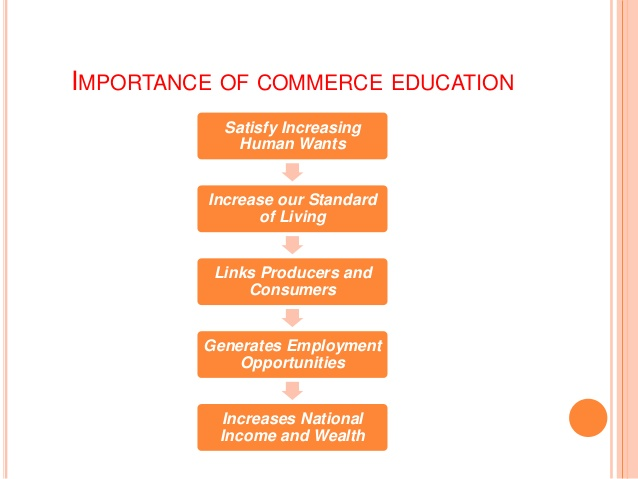 IMPORTANCE OF STUDYING COMMERCE IN EVERYDAY LIFE.
Difference between Commerce and Economics
Distinguish between commerce and economics
The main distinction between economics and commerce is that, the subject matter of economics is wider than the subject matter of commerce. Economics deals with all the activities involving production, distribution, exchange and consumption. Commerce is concerned with one section of economics activities.it is a system through which raw materials are distributed to the producers and the finished products to the consumers.Example commerce will study a good from a producer to consumer. It will also study the means by which a good reaches a consumer. But economics study it more deeper and wide, there is a branch called environmental economics which studies the impact of a good or service production in the environment. Economics explore more about the degree of consumer satisfaction.
Commerce is therefore a branch of economics that deals with the exchange of goods and services, and the activities that facilitate it.
This means that all the subject matter of commerce are studied in economics, but not all the subject matters of economics are studied in Commerce.
Development of Commerce in Tanzania
Discuss the development of commerce in Tanzania
THE DEVELOPMENT OF COMMERCE IN TANZANIA.
Commerce plays a fundamental role in the satisfaction of human wants. In Tanzania primitive societies, the producers themselves were the consumers. Example, If someone wanted to maize and he produced beans, he has to find a person who has beans but he wanted maize. They then exchange them to satisfy their wants. Hence; they were compelled to provide themselves with foods, shelter and clothes. Under such circumstances, the question of commercial transactions or exchange of goods and services did not arise. But slowly heir wants started to increase in size and in number. They were no longer able to satisfy all their wants, so they began exchanging he commodities produced with those produced by others. This exchange of goods for goods was known as barter system of trade.However, barter trade could not persist for a long period of time due to the following demerits:
LETS MAKE A DEAL! YES THEY HAD NO MONEY BUT THEY DID SATISFY EACH OTHERS WANTS. 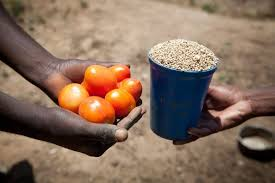 MERITS OF BARTER SYSTEM
BARTER SYSTEM IN MODERN TIMES.
Due to invention of money, barter system is not so much practiced, however it is still applied in some situation as:
HOW MONEY SOLVE HAS SOLVED THE PROBLEMS OF BARTER SYSTEM
Double Coincidence of Wants:
Money as medium of exchange has removed the double coincidence of wants. Under monetary system money is exchanged for goods and services when people buy things. Goods and services are exchanged for money when people self-things, there is no necessity for a double coincidence of wants in the presence of money.
A man with the wheat, who wants to purchase oil, need not to find a person having oil and wants wheat. He can sell his wheat in the market for money and then purchase oil with the money thus obtained.
Exercise 1
Quiz.