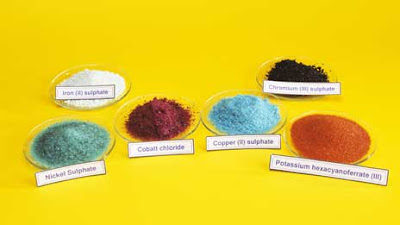 TOPIC 9: COMPOUNDS OF METALS
Metals combine with other substances to form compounds. There is a diversity of metal compounds known. One can make an endless list of the compounds of the metals. In this chapter, we are going to concentrate our efforts on the following compounds of the metals: oxides, hydroxides, carbonates and hydrogencarbonates, nitrates, chlorides and sulphates.
Oxides
Preparation of Oxides of Some Metals by Direct and Indirect Methods
Prepare oxides of some metals by direct and indirect methods
All elements except helium, neon and argon form compounds with oxygen. This is because oxygen is quite reactive. Binary compounds of oxygen are known as oxides. Therefore, a metal oxide is a binary compound of oxygen and a metal.
Metal Oxides
Classify metal oxides
Chemical properties of metal oxides
The Reactions of Metal Oxides with Water and Dilute Acids
Demonstrate the reactions of metal oxides with water and dilute acids
Preparation of metal oxides
Metal oxides can be prepared by:
Preparation of metal oxides by direct combination(Direct method)
In this method, oxides can be prepared by direct combination of metals with oxygen. This involves heating a metal in air. When some metals are burned in the air, they react with oxygen of the air to form metal oxides. However, this method is not intensively used because some metals tend to form a protective layer of an oxide on the surface of metal and prevent further attack by oxygen. The best example of such metals is aluminium which, when heated in the air, forms a protective layer of aluminium (III) oxide (Al2O3) on the surface of a metal whichprevents further attack by oxygen. Table 9.1 shows the products formed when certain metals are burned in the air.
Table 9.1: The reaction of metals with oxygen
Preparation of metal oxides by indirect methods
This method involves thermal decomposition of salts. When some salts are heated, they decompose into oxides and other products as well. If the anion part of the salt heated contains some oxygen, a portion of this oxygen may remain bonded to the central metal atom.
However, this method is limited only to those compounds of metals below sodium in the electrochemical series. For instance, potassium oxide or sodium oxide cannot be prepared by action of heat on their carbonates. Thermal decomposition of some metals is as shown by the following equations:
Hydroxides also behave in a similar manner. When hydroxides of metals below sodium in the electrochemical series are heated, they decompose into respective oxides, giving off water in the form of steam.
The oxides can also prepared by heating some nitrates and sulphates:
Nitrates of silver and mercury are not suitable for preparation of oxides by thermal decomposition because they decompose to metals directly when heated. The bond between oxygen and a metal atom is not strong enough to withstand the thermal energy:
The Uses of Metal Oxides
Explain the uses of metal oxides
Metal oxides find a wide range of uses. The following are the uses of the most common oxides:
Uses of calcium oxide (CaO)
Uses of magnesium oxide (MgO)
Uses of aluminium (III) oxide (Al2O3)
Uses of zinc oxide (ZnO)

Metal hydroxides can be prepared in the laboratory by two methods:
Direct method
This method involves such processes like adding metals directly in water. The method is suitable for preparation of soluble hydroxides (alkalis).
Indirect method
This method involves the preparation of insoluble hydroxides by reacting aqueous solutions of sodium or potassium hydroxide with aqueous salts of metals. These are called precipitation reactions. Only NH4OH, KOH and NaOH are completely soluble in water. Calcium hydroxide is sparingly soluble in water (0.173g/100 ml at 20°C). All other hydroxides are insoluble in water and they can be prepared by this method:

Caustic alkalis react with soluble salts of certain metals like copper, lead, zinc and iron to form their insoluble hydroxides by double decomposition.
Sodium hydroxide liberates ammonia gas from ammonia salts when both are warmed together. This is the standard test for any ammonium salt.
When carbon dioxide is bubbled through aqueous solutions of the caustic alkalis, the carbonates are formed. With excess of the gas, the hydrogencarbonates are formed.
Chlorine reacts with excess of cold dilute caustic alkalis to form the hypochlorite, (NaClO or KClO).
If excess chlorine is bubbled through hot concentrated solutions of caustic alkalis, the chlorates are formed, (NaClO3 or KClO3).
Caustic alkalis are strong bases, which react with acids by neutralization reactions:
Chemical properties of Ca(OH)2
Action of heat
All hydroxides except potassium hydroxide (KOH) and sodium hydroxide (NaOH) decompose under the action heat to the oxide and steam. Calcium hydroxide undergoes thermal decomposition to calcium oxide and steam. Ca(OH)2(aq)→CaO(s)+ H2O(g)
Reaction with acids
Calcium hydroxide dissolves readily in dilute hydrochloric acid and nitric acid to form the corresponding calcium salts: Ca(OH)2(aq)+ 2HCl(aq)→CaCl2(aq)+ H2O(l) ;Ca(OH)2(aq)+ 2HNO3(aq)→Ca(NO3)2(aq)+ 2H2O(l)
Its reaction with dilute sulphuric acid is unsatisfactory due to the formation of calcium sulphate, which tends to precipitate on any dissolved lime.
Reaction with carbon dioxide
A solution of calcium hydroxide in water is called limewater. Carbon dioxide turns limewater “milky” due to the precipitation of white particles of calcium carbonate. Ca(OH)2(aq)+ CO2(g)→CaCO3(s)+ H2O(l)
Reaction with ammonium salts
Any ammonium salt will release ammonia gas when heated with calcium hydroxide solution. This is the common laboratory method for preparation of ammonia gas. Ca(OH)2(aq)+ 2NH4Cl(s)→2NH3(g)+ CaCl2(aq)+ 2H2O(l); Ionically; NH+4(s)+ OH-(s)→NH3(g)+ H2O(l)
Reaction with chlorine
Reaction with hydrogencarbonates
Calcium hydroxide removes temporary hardness of water by precipitating the carbonate from the hydrogencarbonate. Ca(HCO3)2(aq)+ Ca(OH)2(aq)→2CaCO3(s)+ 2H2O(l)


Nitrates
Preparation of Metal Nitrates
Prepare metal nitrates
Nitrates are important compounds widely known for industrial purposes. Sodium nitrate has been known for quite a long time. It occurs in nature as saltpetre (NaNO3).
Nitrates are usually prepared by methods which involve crystallization. This can be done by reacting nitric acid with metals, oxides, hydroxides or carbonates.
However, the nitrates of common heavy metals, except lead nitrate, are very soluble in water and they are deliquescent. This makes it a matter of grater difficult to prepare their crystals. All the crystals are white in colour except those of copper (II) nitrate, which are blue. All nitrates are soluble in water.

Ammonium nitrate is decomposed by heat into dinitrogen oxide and water: NH4NO3(s)→N2O(g)+2H2O(l)
The brown ring test
All nitrates undergo the same reaction with iron (II) sulphate and concentrated sulphuric acid and this reaction becomes a test for the soluble nitrates, the brown ring test. This test is carried out by crushing a little potassium nitrate, putting it in a test tube, adding water to a depth of about 2 cm and then shaking the test tube to dissolve the potassium nitrate (note that any metal nitrate could have been used instead of potassium nitrate). This is followed by adding a little sulphuric acid and then two or three crystals of iron (II) sulphate, which have also been crushed. The contents are shaken to dissolve them. Finally, the test tube is held in a slanting position and a slow continuous stream of concentrated sulphuric acid is poured down the side of the test tube. The acid forms a separate layer underneath the aqueous layer and, at the junction of the two, a brown ring will be seen. This brown ring is the characteristic test for all soluble nitrates.
Explanation
The Uses of Metal Nitrates
Explain the uses of metal nitrates
Uses of Metal Nitrates include:


Chlorides
Preparation of Metal Chlorides by Direct and Indirect Methods
Prepare metal chlorides by direct and indirect methods
In everyday life, we come across many chlorides. Sodium chloride, literally known as table salt, is the commonest chloride that we use in every walk of our lives. It is added to some foods to make them taste better. In Tanzania, the salt is found in large deposits at Uvinza in Kigoma region. The salty taste of sea water is mainly due to dissolved sodium and potassium chlorides.
Metal chlorides can be prepared by direct and indirect methods. All metals are attacked by chlorine to form chlorides. Metals above hydrogen in the reactivity series can displace hydrogen of the hydrochloric acid to form metal chlorides. Hydroxides, oxides or carbonates of potassium, sodium or calcium react with dilute hydrochloric acid to produce chlorides of respective metals. When dilute hydrochloric acid is added to the aqueous salts of lead and silver, they produce lead and silver chlorides respectively. These are the only two common insoluble chlorides. The rest of the chlorides are all soluble in water.
Preparation of chlorides by direct method
Metal chlorides can be prepared by direct action of chlorine gas on metals. For example, iron (III) chloride is made by the action of chlorine on iron. Figure 9.2 shows how iron (III) chloride can be prepared by passing chlorine directly over a heated metal. An iron wire is placed in a hard glass tube as shown and a stream of pure chlorine gas is passed over it. When the wire is heated, by means of a burner, the wire glows and the source of heat is removed. The reaction continues even without further application of heat. Black crystals of iron (III) chloride are collected in the small bottle, which acts as a condenser.2Fe(s)+ 3Cl2(g)→2FeCl3(s)
Because anhydrous iron (III) chloride is deliquescent, it should be removed and placed in a desiccator. Note: When hydrogen chloride gas is used instead of chlorine, iron (II) is produced.Fe(s)+ 2HCl(g)→FeCl2(s)+ H2(g) 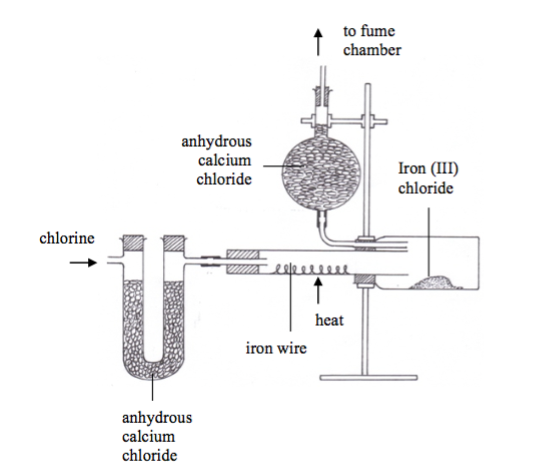 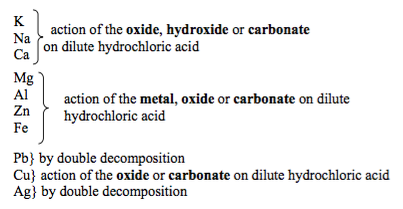 
Sulphates
Preparation of Soluble and Insoluble Sulphates
Prepare soluble and insoluble sulphates
Metal sulphates are generally soluble in water, except for the commonly known insoluble sulphates of lead (PbSO4) and barium (BaSO4). Calcium sulphate is sparingly soluble.The sulphate of alkali metals and those of the alkaline earth metals (Mg, Ca, Sr and Ba) are very stable to heat.
Soluble sulphates can be prepared in the laboratory by reacting metals, oxides, hydroxides or carbonates with dilute sulphuric acid and then isolating the crystals. The sulphates are isolated by the usual methods of preparing soluble salts.
Preparation of insoluble sulphates
The best method to prepare insoluble metal sulphates is by precipitation reactions. This is achieved by reacting their soluble salts with dilute sulphuric acid:
The sulphates are isolated by the usual methods of preparing insoluble salts.
Chemical Properties of Sulphates
Explain chemical properties of sulphates
Sulphates of all metals are normal salts and have the following chemical properties:
Uses of Sulphates
Describe uses of sulphates
Sulphates are salts of considerable importance in our everyday lives. The following are the uses of some sulphates:
Sodium sulphate (Na2SO4.10H2O), also known as Glauber’s salt.
It is used as a mild purgative in medicine. The anhydrous salt, Na2SO4,is used as a laxative. It also finds its use in the manufacture of glass.
Calcium sulphate
In the form of Plaster of Paris (CaSO4.½H2O), is used to make plaster casts that are used in hospitals for the repair of broken limbs. When in the form of gypsum (CaSO4.2H2O), it is used in the manufacture of cement, moulds, wall plasters and wallboards, and inexpensive art objects. Among the many other uses of calcium sulphate are its uses as a pigment in white paints, coating agent in papers, in the manufacture of sulphuric acid and sulphur, and as a drying agent in many laboratory and commercial purposes.
Some uses of aluminium sulphate are as follows:
Iron (II) sulphate is used:
Copper (II) sulphate finds many uses which include:
Zinc sulphate has the following uses: