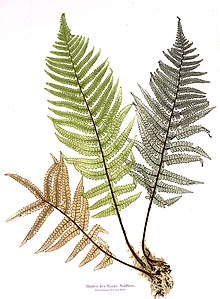 TOPIC 1: CLASSIFICATION OF LIVING THINGS
Kingdom Fungi
Member of the kingdom Fungi include fairly familiar organisms such as mushrooms, toadstools and bracket fungi. There are also less obvious but very important members such as mold, which grow on bread, ripe fruits and other food.
The General and Distinctive Features of the Kingdom Fungi
Explain the general and distinctive features of the kingdom Fungi
General features of kingdom fungi
Distinctive features of kingdom fungi
The Phyla of the Kingdom Fungi
State the phyla of the Kingdom Fungi
Phyla of the kingdom fungi
Ascomycota
Ascomycota are also called sae fungi. They produce spore in sae-like cell called asei. These spores are called ascopores. Examples of Ascomycota are bakers’ yeast, cup fungi and ring worm fungi.
Characteristics of phyla Ascomycota
Distinctive features
(i) Reproduce sexually by means of ascospores
The Structure of Mosses
Describe the structure of mosses
Mosses are small, soft plants called bryophytes, that are typically 1–10 cm (0.4–4 in) tall, though some species are much larger. They commonly grow close together in clumps or mats in damp or shady locations. They do not have flowers or seeds, and their simple leaves cover the thin wiry stems. At certain times mosses produce spore capsules which may appear as beak-like capsules borne aloft on thin stalks.
Advantage and Disadvantages of Mosses
Outline advantage and disadvantages of Mosses
On the advantage side, it can help to hold the bonsai soilin place and prevent it from washing out of the container. Moss can increase the water retention capability of the soil by slowing evaporation.
On the disadvantage side, a thick carpet of moss can reduce the diffusion of gases into the soil and to the roots, which can result in root rotor poor drainage conditions. Moss can grow up onto the surface roots and trunk of your bonsai, and soften their bark, promoting its decay.
Division Filicinophyta (Pteridophyta)
General and Distinctive Features of the Division Filicinophyta
Explain general and distinctive features of the division Filicinophyta
This division was formerly called Pteridophyta. The division Filicinpphyta includes a group of primitive vascular plants. The adult plant body in these plants is a sporophyte. It shows differentiation into true roots, stems and leaves. The stem is mostly herbaceous. Leaves may be smaller or larger. Vascular tissues are present in all the vegetative parts of the plant body.
Characteristics of division Filicinophyta
Members of this kingdom include horsetails, ferns and mosses.
The Structure of Ferns
Describe the structure of Ferns
Ferns are intermediate in complexity between the more primitive bryophytes (mosses, liverworts, and hornworts) and the more advanced seed plants. Like bryophytes, ferns reproduce sexually by making spores rather than seeds. Most ferns produce spores on the underside or margin of their leaves. Like seed plants, ferns have stems with a vascular system for efficient transport of water and food. Ferns also have leaves, known technically as megaphylls, with a complex system of branched veins.
In general, ferns consist of the following structures:
Fronds
The frond is the "leaf" of a fern. It is divided into two main parts, the stipe (leaf stalk or petiole)and the blade (the leafy expanded portion of the frond).
Rhizomes
Rhizomes would be comparable to "stems" in the flowering plants. Fronds arise from therhizome. In some epiphytic ferns (ferns that grow on trees) and in terrestrial creeping ferns therhizome roams widely and is quite visible.
The rhizome contains the conducting tissues (xylem and phloem) and the strengthening tissues (sclerenchyma fibres). The conducting tissue, known as the vascular bundle, carries the water, minerals, and nutrients throughout the plant.
Roots
Roots are formed from the rhizomes or sometimes from the stipe. The roots usually do not divide once they grow from the rhizome. Tree fern roots grow down from the crown and help thicken and strengthen the trunk. The roots anchor the plant to the ground and absorb water and minerals.
Sporangia
The sporangia are the reproductive structures of the ferns and fern allies. They produce the dust like spores that are the "seeds" by which ferns are propagated. Several sporangia grouped together are called a sorus. Most ferns have their sporangia on the underside of the frond, arranged in an organized pattern usually associated with veins in the pinnule (leaf). Many times(but not always) the ferns provide a protective covering for the sorus called an indusium
Spores
The "seeds" of the ferns and fern allies are called spores. Normally they are formed in groups of four. Spores contain oil droplets and sometimes chlorophyll in their nucleus. 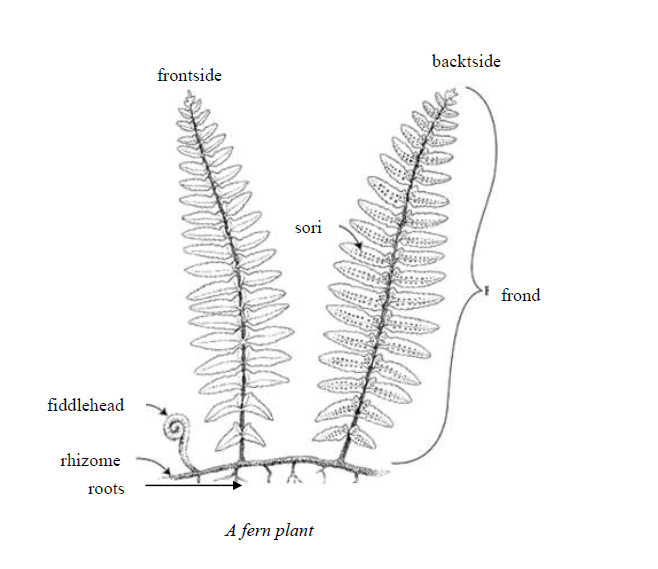