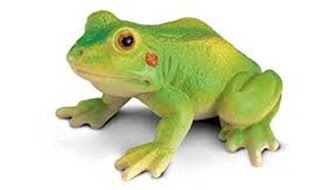 
Concept of Classification
The Concept of Classification
Explain the concept of classification
Have you ever visited a library? How are the books arranged and kept? Are they arranged randomly or systematically? Obviously the books are arranged systematically in the shelves. Science books are kept separately in their respective shelves. Science books are kept separately from social or commercial books. Biology books are separated from physics books or chemistry books. Likewise, in the shop, laboratory or pharmacy items are sorted and placed on the basis of their similarities.
In the world, there are numerous varieties of living organisms.These organisms do vary in size, structure, shape, habitat, mode of feeding and even mode of reproduction. The organisms can be sorted out and placed into different groups based on their similarities. The system of sorting out and placing organisms into different groups on the basis of their similarities and differences is called classification.
The Importance of Classifying Living Things
Explain the importance of classifying living things
The following are importance of classification


Classification Systems
Types of Classification Systems and Their Differences
Outline types of classification systems and their differences
There are two types of classification
Artificial classification. An artificial classification is based on one or a few easily observable characteristics and usually designed for practical purpose with an emphasis on convenience and simplicity. In this type of classification, unrelated organisms are often placed in the same group while closely related organisms are often placed in different groups.Linnaeus included all
Linnaeus included all worm-like organisms in a single group, the vermes. This included wide a range of animals as from nematodes, earthworms to snakes. This was an artificial classification since it did not consider natural relationships such as the fact that snakes have backbones and earthworms do not have. Thus, snakes have more features in common with vertebrates than with worms.
Bats and birds would be placed in the same group because all have the ability to fly since they posses wings. But bats share many features with mammals. They have features like hair, mammary glands, sweat glands and different types of teeth which are characteristics of mammals. Therefore, bats are more related to mammals than birds.Natural
Natural system of classificationThis type of classification system tries to use natural relationships between organisms. It considers many features in common including internal as well as external features.Similarity of embryology, morphology, anatomy, biochemistry cell, structure and behaviour are all considered relevant. It is based on evolutionary relationship in which organisms belonging to the same group are believed to have a common ancestor.
Characteristic features which show homology are distinguished from those which show analogy. Example the fore limbs of mammals, whales, birds and bats have the same basic pattern and similar bone arrangement, i.e. homologous. This suggests that these organisms are coming from the same ancestor and that can be placed in the same group.
The wings of birds and grasshoppers are analogous. The wings of birds have internal skeletons while the wings of grasshoppers do not have bones but they perform similar function. These organisms cannot be placed in the same group since they are different in many ways.
Merits and Demerits of Each Type of Classification System
Explain merits and demerits of each type of classification system
Advantages of artificial system of classification
Disadvantages of artificial system of classification
Advantages of natural system of classification
Disadvantages of natural system of classification
Differences between natural classification and artificial classification
Major Groups of Living Things
Major Groups of Living Things
Mention major groups of living things
The major groups of living things are the kingdoms. Previously, living things were categorized into two main groups; plantae and animalia kingdom. But this classification caused difficulties since some organisms seemed to posses some of the characteristics of both groups. For example, euglena is capable of feeding like an animal and locomote like an animal. Therefore, it is placed in animalia kingdom. But the same euglena has chlorophyll and it is capable of manufacturing its own food. Therefore, it should also be placed in plantae kingdom. Such an organism does not seem to fit exactly in animalia or plantae kingdom. Thus, euglenas are assigned in the major group of their own.
Currently, there are five major groups (kingdoms) of living things.
Ranks of Classification
Outline ranks of classification
In the millions of organisms found on earth some are more similar while others are less similar. For example, all human beings resemble each other more closely than they resemble with the chimpanzees. Humans have more resemblance with chimpanzee than cats and dogs, and more like dogs than birds.Therefore when classifying the organisms, groups are established which are called ranks or taxa.
There are seven ranks of classification
The highest rank of classification is the kingdom. The lowest rank of classification is the species. Every known organism has particular place in each group.
It is the basic unit of scientific classification. Organisms that need to be placed in the same species must have the following characteristics:
N.B: The term division is used by botanists instead of phylum when classifying plants or organisms related to plants.
Classification of some members of animals
Scientific naming of living organisms
The scientific process of naming organisms is called nomen-clature. Biological nomenclature is based on the binomial system (double naming system) pioneered by the work of a Swedish naturalist Carl Linnaeus (1707-1778).
Biologists assign scientific names to organisms so as to avoid confusion among themselves since scientists from different countries use different languages. The scientific names are uniform in all languages.
Latin language is used in assigning the scientific name because it is an official language and that this language is no longer subject to changes; it is considered to be a dead language hence names once given remain unchanged.
Rules of binomial nomenclature
Example 1
Examples of scientific names
Human being:Homo sapiens
Homo is the generic name and sapiens is the specific name.
Other examples of organisms with their scientific names
Viruses
Viruses were discovered by a Russian botanist D. I. Ivanovsky and a Dutchman Beijerink. In 1852 Ivanovsky prepared an infectious extract from tobacco plants that were suffering from mosaic disease. When the extract was passed through a filter able to prevent the passage of bacteria, the filtered fluid was still infectious. 1898 Beijerink gave the name “virus” (in latin means, “poison”) to describe the infectious nature of certain filtered plant fluids.
General and Distinctive Features of Viruses
Explain general and distinctive features of viruses
Characteristics of Viruses
Viruses as living things
Viruses as non-living things
The Structure of Viruses
Describe the structure of viruses
Generally viruses have a very simple structure consisting of the following:
Bacteriophage
Bacteriophage is a virus that attacks and kills bacteria. Some of them have head with a tail sheath. 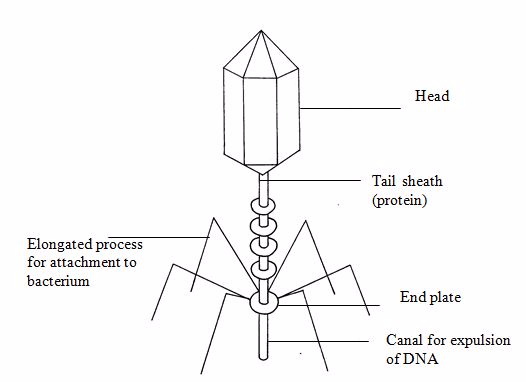 Kingdom Monera
This kingdom is made up of organisms known as bacteria (singular: bacterium). They are the most ancient and smallest organisms with a cellular structure. They are mainly single celled. Bacteria occupy many environments such as soil, dust, water and in the bodies of plants and animals
Some bacteria are found in hot springs where temperatures are 78ºC or more. Others can withstand very low temperatures. Some are found in very deep cracks in the ocean floor, at very high temperatures, about 360ºC (extreme thermophiles). 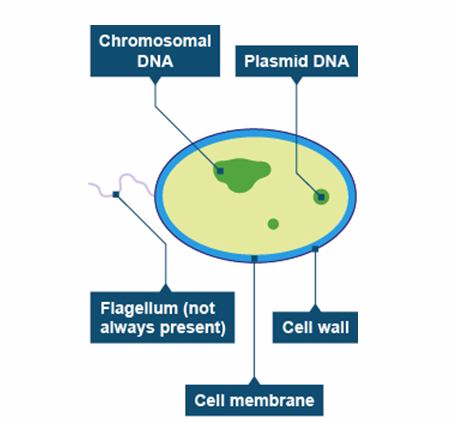 General structure of bacterium
Forms of bacteria
Bacterial shape is an important aid to classification. There are four main shapes
Coccus (plural: cocci)
They are spherical in shape and can be of the following types. 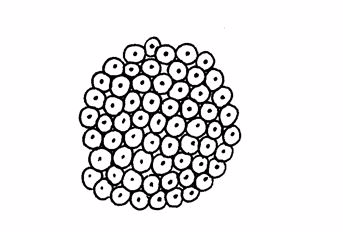 Bacilli (singular: bacillus)
These are rod shaped bacteria. They can be: 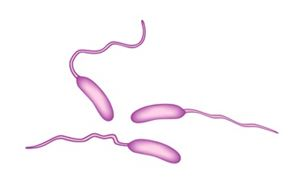 Vibrio cholerae
The Advantages and Disadvantages of the Kingdom Monera
Outline the advantages and disadvantages of the kingdom monera
Economic Importance of Bacteria
In Agriculture, the bacteria are mostly important for following reasons
Disadvantage of Bacteria
The Characteristics of Pathogenic and Non-pathogenic Bacteria
Outline the characteristics of pathogenic and non-pathogenic bacteria
Pathogenic bacteria are bacteria that can cause infection. This article deals with human pathogenic bacteria.
Although most bacteria are harmless or often beneficial, several are pathogenic. One of the bacterial diseases with the highest disease burden is tuberculosis, caused by the bacterium Mycobacterium tuberculosis, which kills about 2 million people a year, mostly in sub-Saharan Africa. Pathogenic bacteria contribute to other globally important diseases, such as pneumonia, which can be caused by bacteria such as Streptococcus and Pseudomonas, and food borne illnesses, which can be caused by bacteria such as Shigella, Campylobacter, and Salmonella. Pathogenic bacteria also cause infections such as tetanus, typhoid fever, diphtheria, syphilis, and leprosy. Pathogenic bacteria are also the cause of high infant mortality rates in developing countries.
Non-pathogenic organisms are those that do not cause disease, harm or death to another organism and is usually used to describe bacteria.It describes a property of a bacterium - its ability to cause disease. Most bacteria are non-pathogenic. It can describe the presence of non-disease causing bacteria that normally reside on the surface of vertebrates and invertebrates as commensals. Some non-pathogenic microorganisms are commensals on and inside the body of animals and are called microbiota. Some of these same non-pathogenic microorganisms have the potential of causing disease, or being pathogenic if they enter the body, multiply and cause symptoms of infection.
Immune comprised individuals are especially vulnerable to bacteria that are typically non-pathogenic but because of a compromised immune system, disease occurs when these bacteria gain access to the body's interior. Genes have been identified that predispose disease and infection with non-pathogenic bacteria by a small number of persons. Non-pathogenic colistrains normally found in the gastrointestinal tract have the ability to stimulate the immune response in humans, though further studies are needed to determine clinical applications.

Kingdom Protoctista
General and Distinctive Features of the Kingdom Protoctista
Explain general and distinctive features of the kingdom protoctista
This Kingdom comprises of unicellular and simple multicellular organisms whose cells have organized nucleus and membrane bound organelles. It includes the algae and protozoa.
Algae have chlorophyll hence make their own food through the process of photosynthesis. Protozoa are heterotrophic taking in ready-made food.
Other organisms, which are included in this Kingdom are red algae, Brown algae, Amoeba, Euglena, plasmodium, trypanosome and paramecium.
General features of Kingdom Protoctista
Distinctive features

Phyla of the Kingdom Protoctista
Mention phyla of the kingdom protoctista
The phyla of kingdom protoctists include the following:
Structure of Amoeba and Paramecium
Describe structure of amoeba and paramecium
Amoeba belong to phylum Rhizopoda, organisms with the following extra features:
Pseudopodia are projection of the cytoplasm that extend and pull the amoeba forward or engulf food particles. 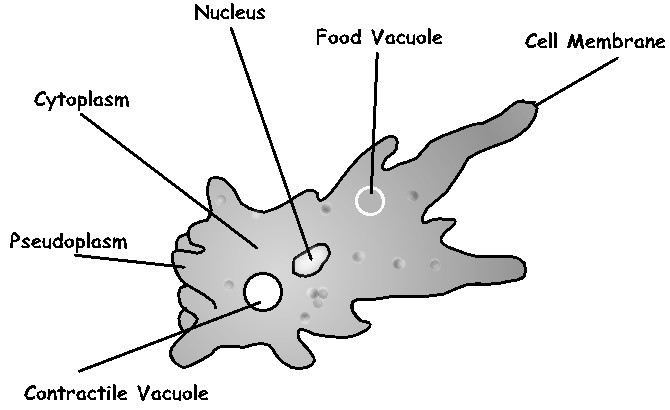 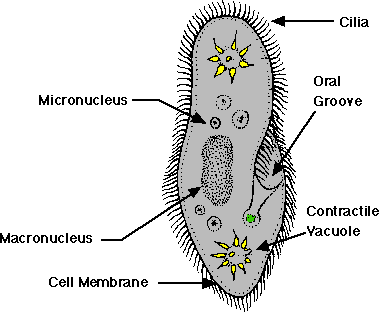 The Advantages and Disadvantages of Amoeba, Euglena Paramecium and Plasmodiu
Explain the advantages and disadvantages of amoeba, euglena paramecium and plasmodium
Advantages of Paramecium: Are eaten by small water animals
Disadvantages of Paramecium: Causes diseases of bulanterdium eoli destroying the lining of intestines
Osmoregulation:Paramecium has two contractile vacuoles and each is associated with permanent system of collecting channels, which empty, into the main vacuole.
Feeding: Paramecium feed on bacteria. These are obtained from the surrounding water by the beating of the cilia-lining o the oral grove.
Reproduction:Paramecium reproduces both asexually and sexually. The asexual method is more common and it is binary fission. Sexual method is called conjugation.
Movement in paramecium is caused by cilia beating. This movement is called cilliary movement.